How To Hack Google Plus For SEO Value 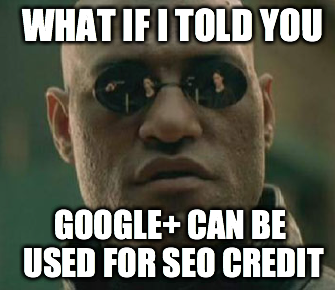 People tend to think of Google Plus as just another social network, built as Google’s challenge to Facebook’s incredible growth over the past decade. What most people don’t realize, however, is the SEO value that makes Google+ so much more than just a social networking platform.

How so? Studies show a powerful correlation between search rankings and the number of Google +1's received by a URL. Searchmetrics found Google +1's to be the most highly correlated factor to search result rankings, and Moz's 2013 scientific correlation study placed Page Authority just above +1's at the top of all correlation factors.

It's probably not a surprise that activity on Google's social network influences Google search results, but the degree of correlation is astonishingly high. While there's a clear divide between correlation and causation, it's clear that Google+ is not simply a social network.

So how do we leverage Google+ for SEO value? First, a little background…

A Brief Overview of Google+

Like Facebook, Twitter, LinkedIn, and the others, Google+ is a social networking platform. Its relationship with SERPs, however, appears to be much more intricate than other social media sites.

In late 2010, Google’s Matt Cutts made it clear that “social signals” were factored into search ranking algorithms. Google never releases details on their frequently updated algorithms, but Cutts confirmed the suspicion that likes, comments, tweets, shares, and other social activity were impacting SEO.

The correlation between helpful content and a high volume of social signals seems natural and intuitive. Great content is more likely to be liked and shared repeatedly than bad content. So the impact of social signals may seem marginal, especially when you realize that Google weighs around 200 factors into their algorithm – unless you’re using Google Plus.

The biggest difference between Google+ and every other social network, in terms of SEO value, may be the way that user-created content is treated.

Public posts on Google+ are indexed for search, unlike most tweets, Facebook posts, etc. [Note: Twitter has told Google to not follow most links and Facebook’s privacy settings prevent many posts from being indexed – it’s not simply because Google won’t index content from other platforms]. Sure, your profile on other social networks will probably rank well for name-related searches, but there’s no way to target keywords and long tail phrases with specific social posts.

The impact of indexing Google+ public content goes far beyond your personal posts. It means every time that your content gets shared by someone else, you’re gaining link equity as their posts are indexed.

Quick summary: there are a couple primary SEO benefits of using Google Plus. First, posts get crawled and indexed – and it happens quickly because, among other objectives, Google is trying to use Google+ to enhance real-time search. Secondly, Google Plus is used to optimize search results with rich snippets, including the popular Google Authorship feature that allows the author’s picture and information to appear in search results.

How To Hack Google Plus For SEO Value

Back to the data for a moment, if Google +1’s are so strongly correlated to rankings, why isn’t there more commotion to get +1’s?

One reason is that Matt Cutts continues to claim that +1’s are not a factor in Google’s algorithm. Assuming he’s telling the truth, we still see the correlation that +1’s equal better SERPs performance. Which leads us to the following conclusions about how to hack Google+ for SEO value.

Getting more +1’s, according to Google, doesn’t mean anything for improving your rank. What does matter, however, is the link building that happens as a result of +1’s. Check out what Mark Traphagen, social media director for Virante, has to say:

“It is not the +1's themselves that are causing the high rankings of posts but the fact that most +1's on a site result in a shared post on Google+, which creates a followed link back to the post. It's instant organic link building.”

What many people don’t realize is that +1’s on posts that include shared links generally equate to links coming back to your content, using the title tag of the content as the anchor text of the hyperlink.

Another component of the issue of +1 impact on SEO is the Author Rank concept that Google is exploring. The idea here is that more established and trusted authors would get a rankings edge over shadier, less-trustworthy sources. In a small way, this is already happening organically. Here’s how:

The people who have already built trust on Google+ and have extensive, established networks are able to share their content and gain hundreds or thousands of +1’s and indexed links. Compare that to someone just starting on Google+ who has to work much harder for that same SEO benefit, and we can see that there is already an organic edge given to those who put in the time to create stellar content and benefit the community.

Sure. Google already knows you’re the author, and (hopefully) you’ve already linked to your content. You’re not necessarily gaining anything in terms of rank, but maybe it’ll encourage other people to click that button too.

2. Boost your CTR with Google Authorship

Google Authorship has no impact on SEO rankings, according to Google. So why is it still helpful? Because your goal isn’t high rankings for the purpose of high rankings – you want to rank well so that you drive more quality traffic to your site. One important metric for growing your search traffic is your click-through rate (CTR). How many people who see your page in Google results actually click through to your site?

Google Authorship puts a face and a name to the search engine results, helping to build trust, communicate relevance, establish credibility, and improve CTR – in some cases by upwards of 150%. There are tons of available resources and awesome tutorials for setting up Google Authorship and testing to make sure it’s working. Remember, CTR has a direct correlation to your traffic numbers – so it’s worth it to set up Google Authorship.

Great content will win…it’s just a matter of when

Search engines are getting smarter and every algorithm update finds and penalizes more scammers and spammers. The good content will win out eventually, but you can help it along and gain an edge by leveraging the Google+ community and platform.