The Anatomy of a Conference #Hashtag 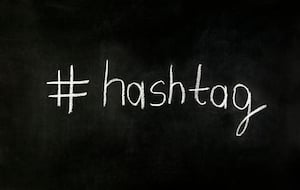 I’ve attended the INBOUND conference for the past 4 years now. It’s been amazing to see the conference grow in size every year, with an accompanying increase in social media visibility.

But just how much is INBOUND’s online reach nowadays? In the weeks leading up to INBOUND 2014, I decided to try a little science experiment: track the #INBOUND14 hashtag on Twitter and see what happens.

I used Zapier to run an automated scan of all public tweets with the #INBOUND14 hashtag, and collect them all into a Google Spreadsheet. I put a few filters into Zapier algorithm: I filtered out all the tweets from HubSpot and HubSpot employees, since I knew they would be tweeting about the conference regardless.

I also filtered out tweets from HubSpot Partner agencies like ourselves, because I already knew we would all be tweeting about the conference regardless as well. I was most interested in what the “regular” conference attendees would be tweeting, since that would be the best indicator of organic growth.

I knew #INBOUND14 would be big, but even still I was blown away by its sheer scope. Between mid-August and the end of September, I tracked almost 60,000 #INBOUND14 tweets. I had to upgrade my Zapier to its maximum level, and even then the tweets still passed Zapier’s maximum monthly limit a few times (luckily Zapier kept running in spite of that).

I didn’t know if my Google Spreadsheet would even be able to handle that much data, but luckily it kept trucking along too – albeit slower and slower!

Let’s take a look at the data: 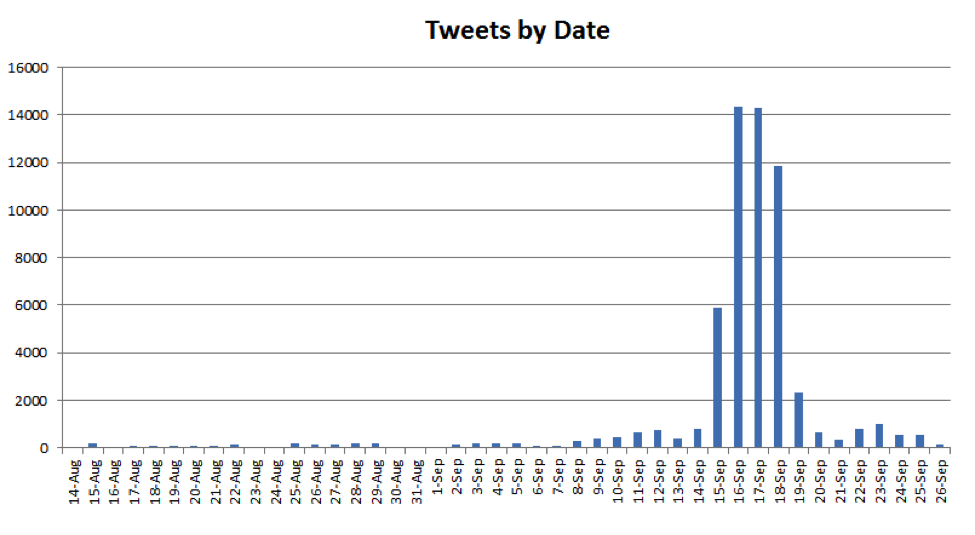 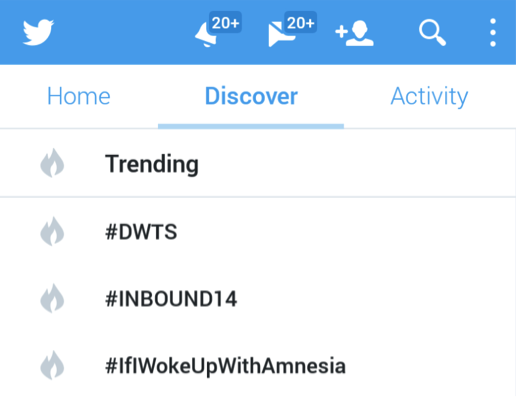 The majority of the #INBOUND14 tweets went out during the regular conference hours between 9 AM and 6 PM or so, when people were attending keynotes and sessions and tweeting about what they were learning or finding inspiring.

But the tweeting continued into the evening as well, as people tweeted about the concerts, street parties or going out on the town after the sessions were done. Even at midnight there were still a thousand tweets per hour going out. The #INBOUND14 folks know how to party! 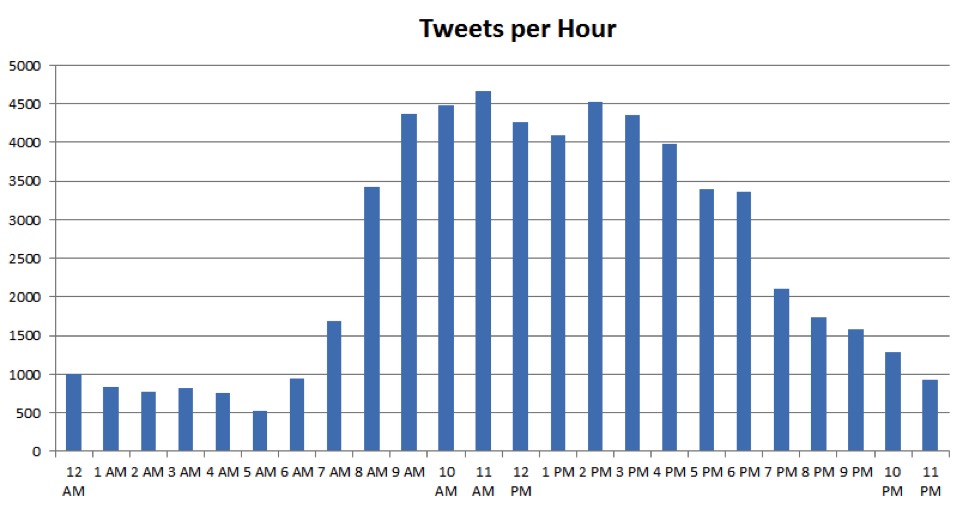 Breaking it down further, we see the most tweets per minute clustering around 9 AM, 11 AM and 12 noon. These are generally about 15-30 minutes into the opening keynotes and/or the first two sessions of the day. I expected to see the highest velocity of tweets right at the very beginning of the keynotes and presentations, so I was surprised to find that this wasn’t the case.

It seems rather than tweeting right at the beginning of the sessions like I was expecting, people instead actually tweeted at the highest rate once the presentation was well underway and the presenter started sharing key tweetable takeaways from their speaking topics. 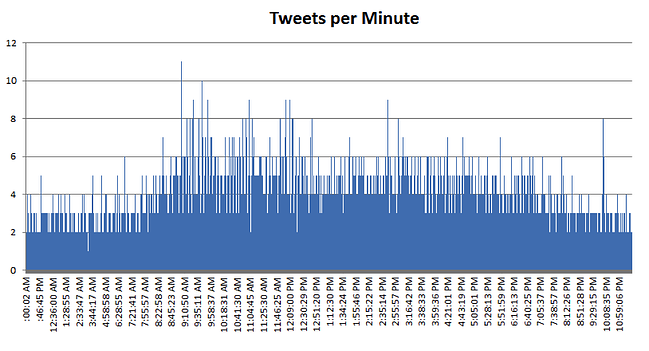 What We Can Learn

#INBOUND14 is a conference hashtag done right. So what can we learn from its success? Here are a few key takeaways.

1) Get the Word Out Early

Event pre-buzz is essential: people have to be aware of a hashtag before they can use it. In the weeks leading up to the conference, the INBOUND organizers began a steady stream of buzz-building through email and social media: announcing the keynote speakers, announcing the featured musical act, and publicizing the session agenda.

The #INBOUND14 hashtag was featured prominently in these posts, and because the hashtag name was short and was the same as the conference name, it was easy for people to identify and remember. By the time people arrived at the Boston Convention Center that Monday night, they were primed and ready to use the #INBOUND14 hashtag.

INBOUND 2014 achieved an important milestone that I thought I would never see: it was the first time I’ve seen a conference mobile app that people actually used! One of the biggest keys to the app’s user adoption was that it had an internal social network just for conference attendees, with an activity stream, the ability to follow people, and like and comment other peoples’ statuses.

Additionally, you could connect the app to your Twitter account, so that anything you posted on your in-app feed also got posted to Twitter. The conference organizers then went a step further and set up an online leaderboard where the top tweeters for each day would win prizes – this gamification mechanic motivated people and got them tweeting even more.

One of the key rules for presentation slides is to never use less than a 30-point text size. One of the reasons for this is to ensure easy readability for your audience. But the other big reason is that this focuses the content of the presentation down to a few easily tweetable one-sentence summaries or takeaways rather than long paragraphs.

The INBOUND keynotes would typically follow a pattern of a particular story told across several slides, followed by one shorty, pithy takeaway at the end of that story on a “hero slide,” and then moving on to the next story. Whenever the speaker would wrap up a story and get to the key takeaway, you could almost feel Twitter light up around you as people tweeted it out. Here’s an example from the Simon Sinek keynote:

"Trust and cooperation are not instructions, they're feelings." @simonsinek #INBOUND14 http://t.co/xxolictNVh

4) Ask for Feedback (Even When It Isn’t Good)

Throughout the week, the INBOUND conference organizers encouraged people to share their feedback on the content and events of the conference so far. Usually the feedback was positive, but not always. However, maintaining the spirit of openness and transparency was essential to getting people engaged.

If the conference attendees began to get the sense that the #INBOUND14 hashtag was being deliberately engineered to be a promotional PR tool rather than as a true community-builder where they could share their opinions, the amount of people tweeting would have plummeted. Encouraging people to open up and share the good, the bad and the ugly was essential to getting them on-board with #INBOUND14.

Time to Put These Lessons to Use

Publicizing a conference shouldn’t be left completely up to the conference organizers themselves. If you run a conference or other event but fail to enlist your attendees’ help to publicize it on Twitter and elsewhere, you’ve missed a big opportunity.

Putting on an event takes a lot of work – you deserve more exposure for it! Take some of the lessons learned from the runaway success of #INBOUND14 and try applying them to your own next event. It takes planning and a bit of legwork, but it can amplify your event’s visibility multitudes beyond what you can achieve by yourself. 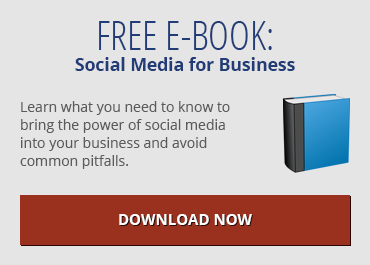 Don't Lose Touch! How to Follow Up With Convention and Trade Show Leads