My 15 Minutes of Social Media Shame

You know how they say, "everyone loves a pregnant woman"? Well for my sake, I really hope that's true. Sunday night, I became the unfortunate victim of every marketer's worst(ish) nightmare: I accidentally posted to HubSpot's company Twitter account ... thinking it was my personal one. This is my story.

I'm five months pregnant with my second kid, and I happen to have a baby blog I started when I was pregnant with my first son. To document my second pregnancy, Sunday night I posted a picture of my growing bump to a page on my blog. I also shared it on my Facebook Timeline as well as my personal Twitter account. Or so I thought ... 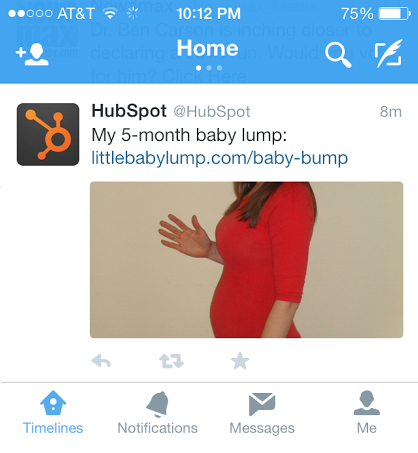 Yup ... definitely not my personal Twitter account. The kicker is that I didn't notice what I'd done right away. I sent the tweet, and then sat down to watch the season finale of Homeland with my husband. And did I mention HubSpot's Twitter account has over 340,000 followers?

About 15 minutes into the show, I happened to check my work email on my phone ... and boy am I glad I did. Sure enough, I had an email from a colleague. The subject line read "Oops," and within the email was the screenshot you see above.

As much as I'd like to blame technology for this one, it all boils down to good old-fashioned human error. Although in my case, I'm probably going to try to pass it off as "baby brain," since I'm now more convinced than ever that it's a real, legitimate thing.

Here's what happened: Last week, a helpful tool we use all the time on the HubSpot blog called ClickToTweet decided to stop offering its services for free. As a result, we set up a paid account for HubSpot.

Because ClickToTweet requires you to log in using your Twitter credentials, last Friday I logged in as @HubSpot in order to use it ... it never crossing my mind that doing so would log me in to Twitter.com as @HubSpot as well. But lo and behold, come Sunday night when I composed my tweet, I was still logged in as @HubSpot, and I hadn't been careful enough to double check that before I tweeted.

After reading the "Oops" email and spewing out several expletives in a row, I quickly fired up my laptop to view the evidence. Then I immediately sprang into PR mode. Luckily, PR and social media management used to be my job at HubSpot, so after the initial shock wore off, I started realizing this wasn't the end of the world. Worse comes to worst, I figured we could always just make fun of ourselves for the slip-up, and it would all boil over. There were definitely worse things I could've accidentally tweeted ... and everyone loves a pregnant woman?

After checking to see if anyone had tweeted at HubSpot to recognize my accidental tweet, I deleted it from our account. Luckily, it was a Sunday evening, and many of you were probably also enjoying the season finale of Homeland (just hopefully not live-tweeting it). To cover my bases, I also alerted our social media manager and our PR manager, and they both reassured me that no action was necessary on our part. This wasn't exactly a "crisis" that needed to be addressed. Phew.

Here's the thing. While it's so easy these days to blame technology for social media slip-ups such as this one (and many people often do), in this particular instance, only I was to blame. No software malfunction, no bug. Just my own carelessness (err ... baby brain).

No matter what tools and technology you use to power your marketing, don't forget that humans are behind it. We're the ones telling those tools what to tweet, who to email, what to publish. And ... well ... sh*t happens, guys. Because we're only human after all.

What to Do if This Happens to You

Every scenario will be different, and much will depend on the context of the slip-up itself. In my case, my accidental tweet was pretty harmless. In fact, I consider myself lucky, since the whole scenario made for a perfect teaching moment on this blog. Some faux pas might require more PR muscle if something a little bit more scandalous gets posted, but most slip-ups are easy to recover from with a little bit of humor and grace. And you may be surprised at how forgiving people will be if you handle it right.

Take the American Red Cross for example, whose rogue tweet back in 2011 is pictured below: 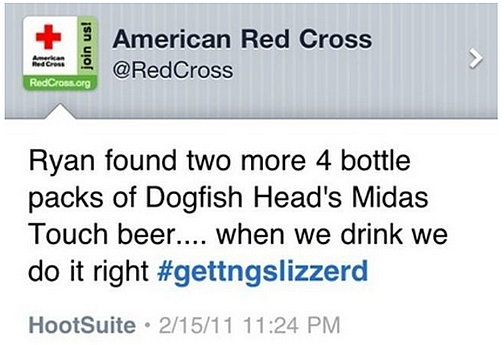 As a result, the Red Cross received an outpouring of support and sympathy from its followers. In fact, even Dogfish Head brewery got in on the action:

And the Red Cross replied back with:

Has anything like this ever happened to you? How did you recover from it?

How to Create a Social Media Report [Free Template]

The Start-to-Finish Guide to Writing a Social Media Proposal

19 Social Media Marketing Myths to Leave Behind in. 2020