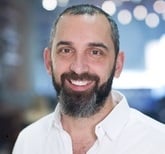 The program began as it always did -- with a spritely, “Welcome to INBOUND Radio on SiriusXM channel 125.” Host Mike Volpe went on to introduce the day’s guests. First up was a prominent Stanford medical researcher, who’d made a breakthrough in Parkinson’s treatment thanks to the millions of iPhone and Apple Watch users who volunteered to have their health monitored through their mobile devices. “Giving away your health data is about as inbound as it gets,” observed Volpe when he wrapped up the interview from HubSpot’s brand new Cambridge recording studio.

Although this scenario hasn’t yet occurred, don’t call it fiction. It’s more like pre-reality, or, in the words of executive-turned-executive-coach Cameron Herold, a “vivid vision.”

Herold, the former COO of 1-800-GOT-JUNK, has become one of the world’s most sought-after speakers and advisors. Simply put, he helps top CEOs perform even better. One of Herold’s most popular techniques is what he calls a vivid vision. Think of it as a drug-free executive Peyote trip, in which the leader of an organization travels ahead three years and returns clutching a hyper-detailed narrative of the company’s future state. A well-crafted vivid vision is a little trippy in that it describes the sights, sounds, mood, energy, and dialogues surrounding events that have not yet occurred.

After listening to Herold explain this concept on The Growth Show podcast, I decided to give it a try on behalf of the HubSpot content team. I booked some alone time in the company nap room, conjured up Doc Brown and hopped aboard my mind’s Delorean. Destination: 2018.

The exercise was, admittedly, awkward -- perhaps even corny -- at first. Self-awareness got the better of me, and I struggled to visualize reality beyond the end of the year, much less the mid-point of the next U.S. President’s term. I also defaulted to math -- mentally calculating traffic and conversions by compounding today’s growth rates. I thought of the same people, in the same seats, doing the same jobs. Just better. In other words, I was doing it all wrong.

Then I remembered the source of the vivid vision process: Olympic athletes. Herold explained that high-achieving athletes painstakingly visualize the outcome of their events in advance of competing. Suddenly, the exercise felt less new agey. I put the flux capacitor back to work.

Questions raced at me. Would we have a blog? If so, what would it look like? Who would be reading it? What about ebooks? Did people still read them? And the podcast that triggered this post … what kind of guests would we host?

Once I shut off (or at least suppressed) my self-monitor, the exercise became enjoyable. Indulgent even. I imagined teaching a Columbia J-school class on business blogs. I heard several students rebuke me for hobbling “real” journalism.

I pre-lived a conversation with the managing editor of our blog, who insisted writers should get bonuses based on scoops, not leads. She mentioned a specific blogger who would get angry when she’d be scooped by a commercial blog. The editor wanted to permeate this competitive spirit throughout the team. I overheard HubSpot bloggers complain about the very same issues that have long irritated traditional journalists; I saw press badges for massive industry events hung in bloggers’ workspaces; I feared my analytics person might get poached by BuzzFeed, which was now seen as The New York Times for the post-Millennial generation. I found this observation so horrifying that it nearly shook me out of my vision.

My content strategists had evolved into research analysts. They were routinely invited to deliver on-air commentary about sales and marketing trends for various cable networks. They snickered when Fox Business called, knowing how the network rankled me. HubSpot’s podcaster and I tried to figure out if we could get (still) Apple CEO Tim Cook to mention The Growth Show during the company’s next press event.

It took me a while, but eventually I got the idea: A vivid vision isn’t just dragging a formula forward in Excel. It’s rethinking the application.

Now it’s your turn. Check out Cameron Herald’s interview with Mike Volpe on The Growth Show. And then go back to envision your own company’s future. You’ll be excited to see what’s waiting there.