There's nothing worse than an ad that keeps popping up for something you'd never buy. About 39% of internet users agree, feeling that online ads aren't relevant to them. So it's no wonder that one in four people will leverage some sort of ad blocker in 2021. 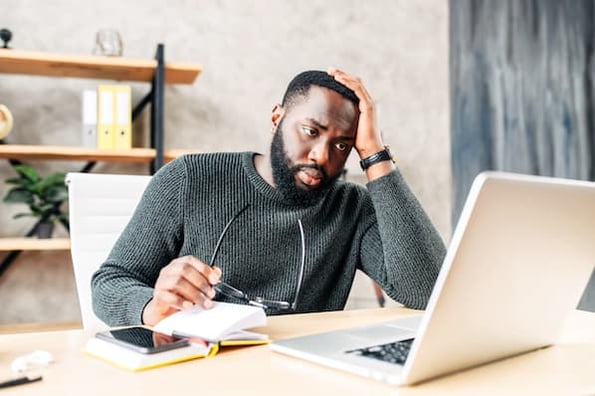 An ad blocker is software that's meant to improve a user's online experience by removing or changing digital ads. It's designed to make browsing simpler, so you don't have a giant flashing ad taking up half the screen while you research customers and spy on a competitor's latest product launch.

Still, digital advertising is on the rise.

Global digital ad spend is expected to exceed $455 billion this year, which means an increase in the number of banner, display, and news feed ads. This barrage is pushing more internet users toward ad blocking tools so they can shop and scroll in peace. To truly understand ad blocking statistics, it's important to have a grasp on the digital ad landscape.

But how many people are actually using ad blockers? And what are their reasons for getting rid of ads? This list of ad blocking statistics will answer those questions and more.

Whether you're looking for tips to attract customers or wondering how to boost clicks, you can find the stats you need to understand your audience and make your next campaign a hit.

2. The internet is considered the most important medium for advertisers and accounts for 51% of total media ad spend in 2020. (Statista, 2021)

3. The average internet user spends six hours and 55 minutes on the internet each day. (Hootsuite, 2021)

8. In a study about how advertising influences customer perception, 41% of respondents said that an ad placed around relevant content sparked a positive brand perception. (Statista, 2020)

9. 63% of internet users in the U.S. said they have a negative attitude towards ads in online videos, and about 47% of people said the same about website ads. (Statista, 2021) 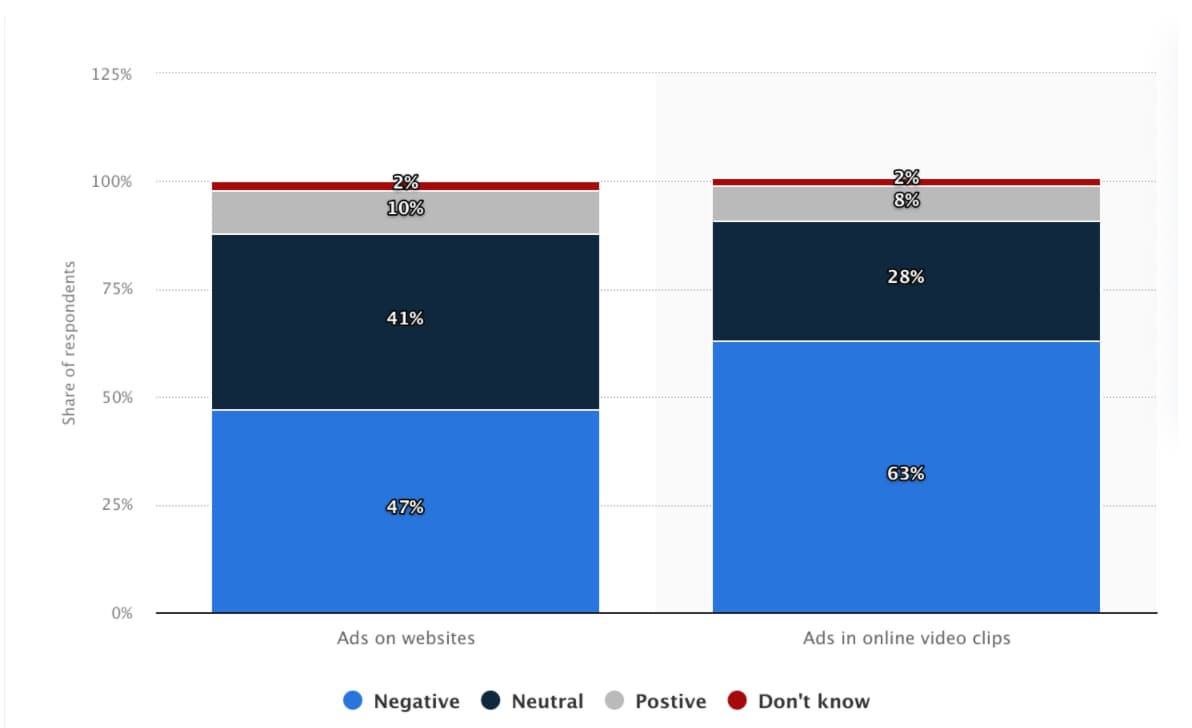 10. In a 2020 survey conducted in the U.S., almost 50% of online users had a negative attitude toward website ads when asked how they felt about digital advertising. (Statista, 2021)

12. Approximately one in four internet users will leverage some sort of ad blocker in 2021. (eMarketer, 2021)

15. About 26% of internet users in the U.S. blocked advertising on their devices in 2019, which meant one-quarter of paid advertising messages never reached their audiences. (Statista, 2019)

18. Most ad blocking happens on desktops and laptops, as it's more difficult to block ads within smartphones apps. (eMarketer, 2019)

19. Ad blocker monetization strategies are on the rise. Acceptable Ads, software that turns ad blockers into ad filters to display relevant content, reached about 200 million users around the world in 2020. (Statista, 2021) 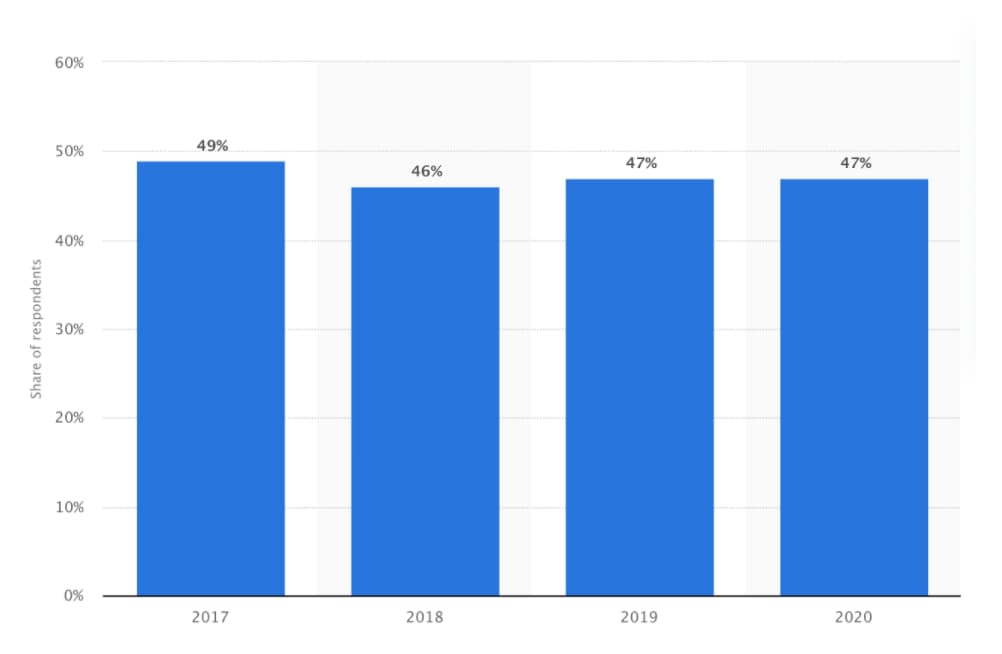 23. By the end of 2020, there were approximately 586 million monthly active users of mobile ad blocking browsers worldwide. (Statista, 2020)

24. The top reasons why internet users around the world use ad blockers: (Hootsuite, 2021) 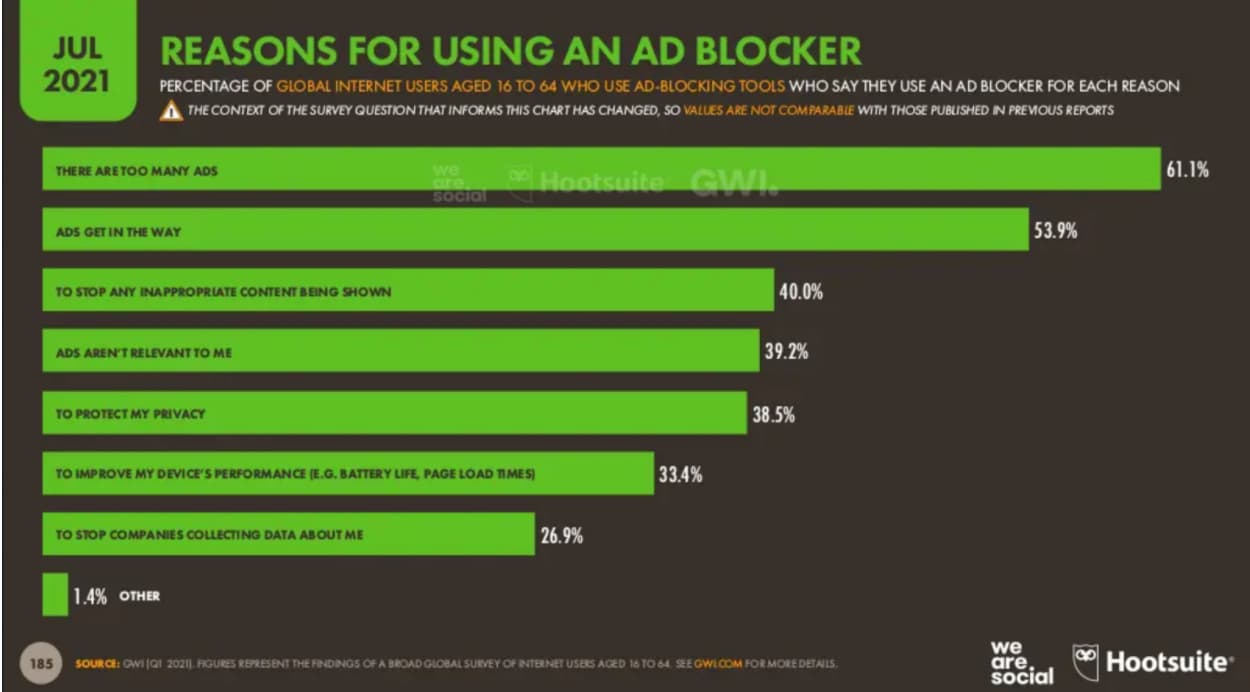 25. In the U.S., 44% of internet users say they use ad blockers because they don't want their online behavior to be tracked. (Statista, 2021)

26. 71% of people use ad blockers because they find websites more manageable without banner ads (Statista, 2021)

27. 66% of internet users in the U.S. say that video ads that play automatically with sound are the most annoying ads, while 55% said the same about video ads without sound. (Statista, 2019) 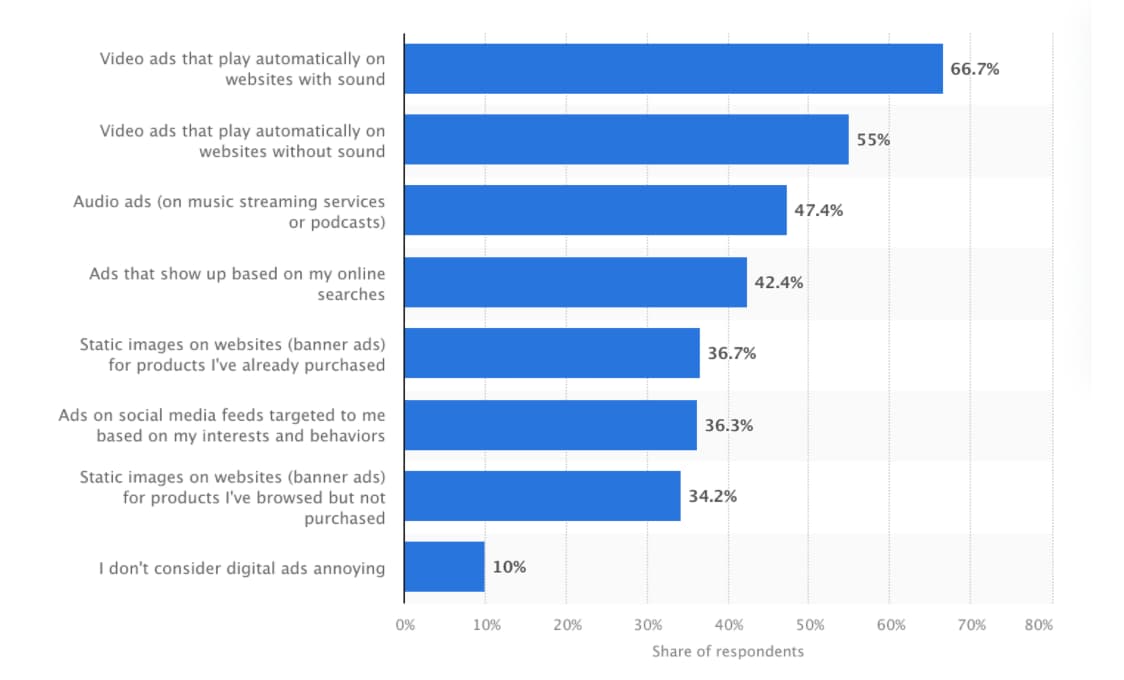 30. Worldwide, 19.6% of men aged 25-34 years old feel represented in advertising — the highest of any group. But this group also is the most likely to use ad blocker tools, with 43% using some sort of ad blocking software. (Hootsuite, 2021)

31. 10% of men and women aged 55-64 years old feel represented in advertising—the lowest percentage of any age group — yet this group is the least likely to use tools to block online ads. (Hootsuite, 2021) 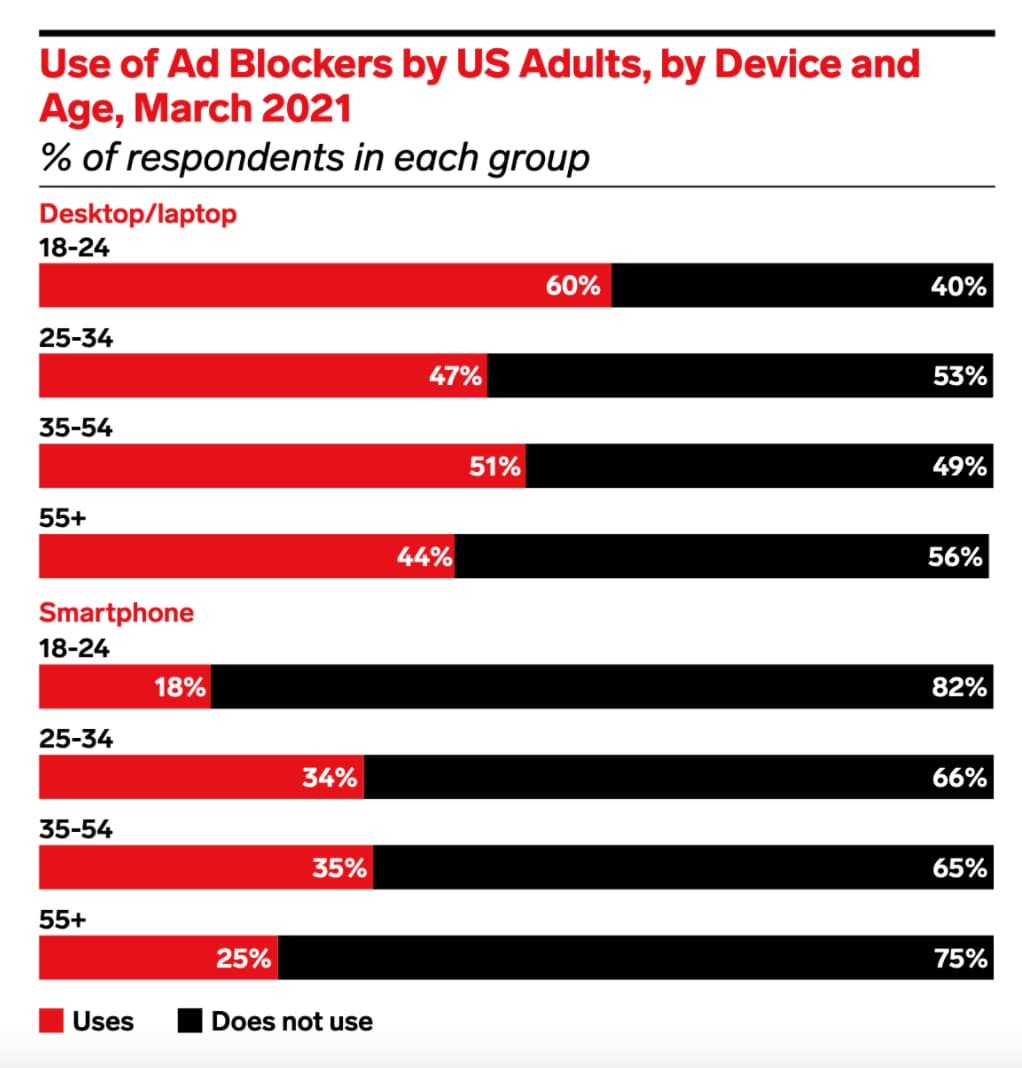 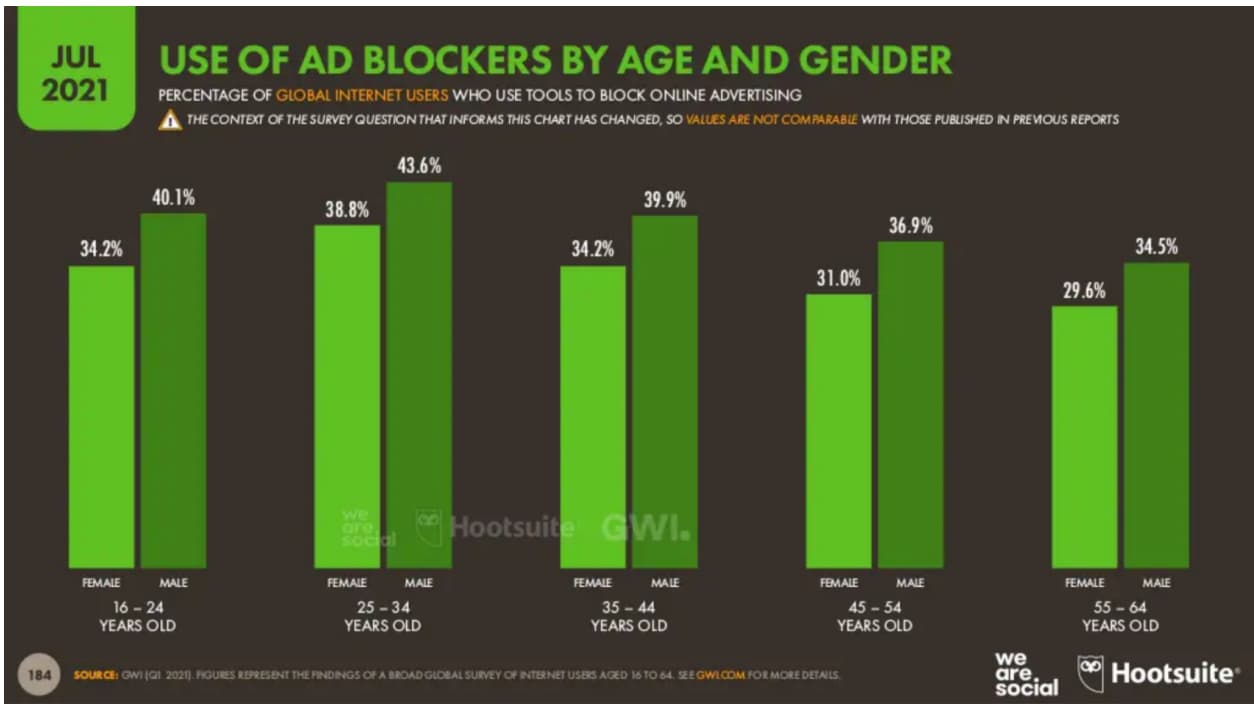 39. People with a higher income are more likely to feel like personalization is invasive and didn’t want to share their personal information, no matter the benefit they received. (Merkle, 2020)

Ad blockers aren't going anywhere, so it's good to reference these ad blocker statistics as you set up your next campaign. With the right information on ad blocker usage, you can understand who's most likely to click and how to best reach your audience.

Learn How to Develop a Winning Online Advertising Strategy