What Amazon Can Teach You About Email Marketing: 4 Key Lessons 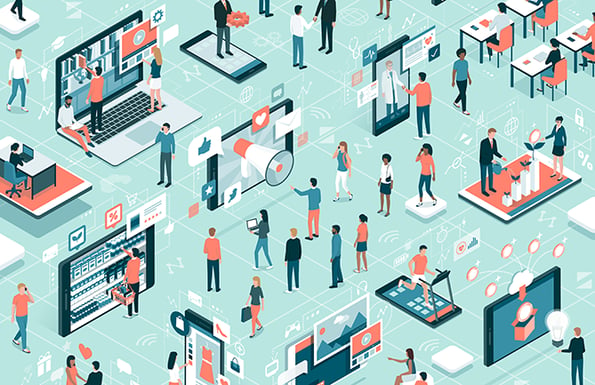 While Amazon’s journey from startup to essential world domination is the result of a combination of factors (including a bit of luck), there are easily observable lessons businesses of all sizes can learn from the e-commerce giant -- particularly when it comes to its email marketing.

For the uninitiated, a few quick facts:

Below are four key lessons from Amazon’s approach to email marketing:

What Amazon Can Teach You About Email Marketing

1. A Focus on Not Interrupting the Email-to-Website Flow

A key lesson you can learn from Amazon’s approach to email marketing is how much of an effort it puts into ensuring that email-to-website user flow isn’t interrupted: for Amazon, email isn’t just another component -- it's an extension of the Amazon website -- and moving from a particular email to a desired action on the Amazon website is often a click away.

Below is an email Amazon sent to me: 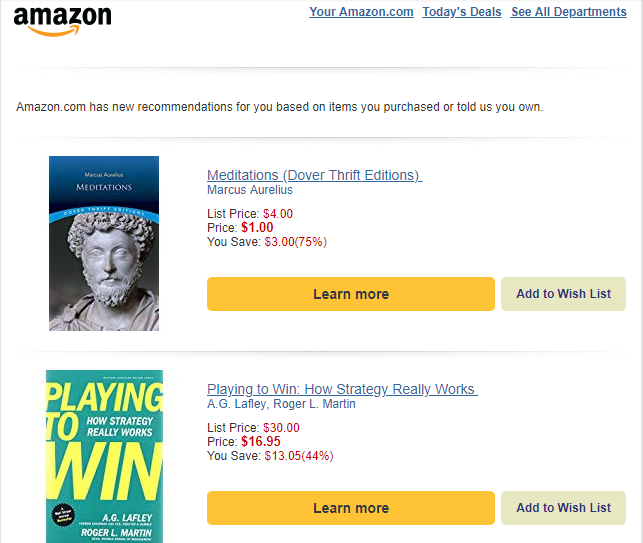 A few things are instantly noticeable from the above email, but I want to pay attention to two in particular:

This experience continues even after a purchase has been made. Here’s another email I got from Amazon: 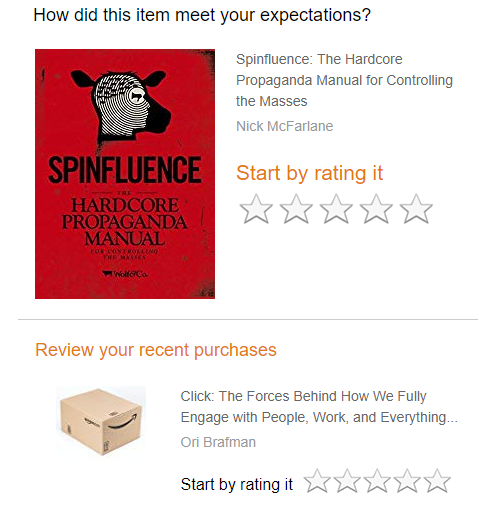 Shortly after purchasing some items on Amazon, the ecommerce giant sent me an email asking me to review my purchase: right from my inbox, I could click on the number of star I want to give the product and I’ll be automatically redirected to the reviews page on Amazon.

Research has indeed shown that interrupting user flow by adding unnecessary extra steps that affects user action can kill conversions; Amazon is aware of this and is careful about ensuring that steps users have to take from the email to action phase is as direct and straightforward as possible.

Key lesson: Reduce email-to-website friction by ensuring that CTAs in your emails lead users directly to the action you want them to take. Your CTA shouldn’t lead to more information; it should lead to an action.

2. Reliance on a Well-Optimized Targeted Follow-Up System That Leverages the Familiarity Principle

One of the biggest weapons in Amazon’s email marketing arsenal is its ability to repeatedly follow up until a customer purchases -- premised on the psychological principle of the mere-exposure effect (also known as the familiarity principle).

The familiarity principle says that we tend to like and take something more seriously, even if we didn’t initially, after repeated exposure to it.

One of the most popular experiments that demonstrate the effectiveness of the familiarity principle was conducted by a professor called Charles Goetzinger in the year 1968. For the experiment, Goetzinger had a student come to class dressed in a large black bag with just the student’s feet visible. He then carefully monitored other students’ reaction to this “black bag.” As expected, and in line with the familiarity principle, Goetzinger found that other students were initially hostile to the black bag. After having the student repeatedly come to class dressed the same way, however, other students started to become curious about the black bag, gradually began to engage it, and eventually developed a liking for it.

A classic example of just how relentless Amazon can be when it comes to email follow ups can be seen in a case study of a user that looked up point and shoot cameras on the site; after spending just two or three minutes researching cameras, and Amazon established intent.

What Amazon did next is a key lesson for all email marketers: in just 12 days, Amazon had sent nine emails featuring different cameras in an attempt to get the user to buy.

Here’s the very first email Amazon sent to the user: 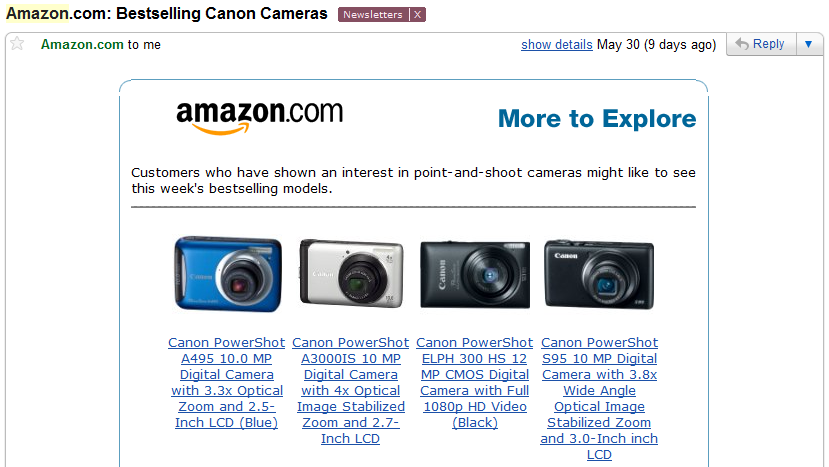 On the fourth day, Amazon sent another email trying to offer a 50 percent discount on a Canon PowerShot camera: 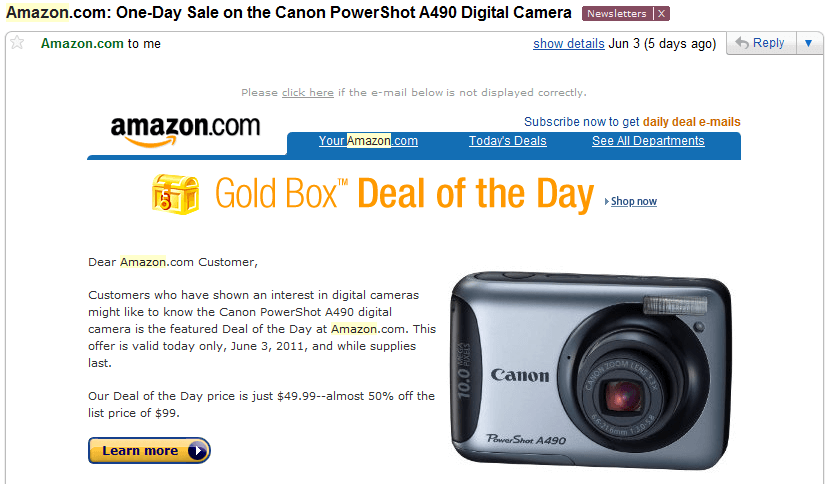 The eight email happened to coincide with Father’s Day in the US, so Amazon sent another follow up promoting a Father’s Day deal for cameras: 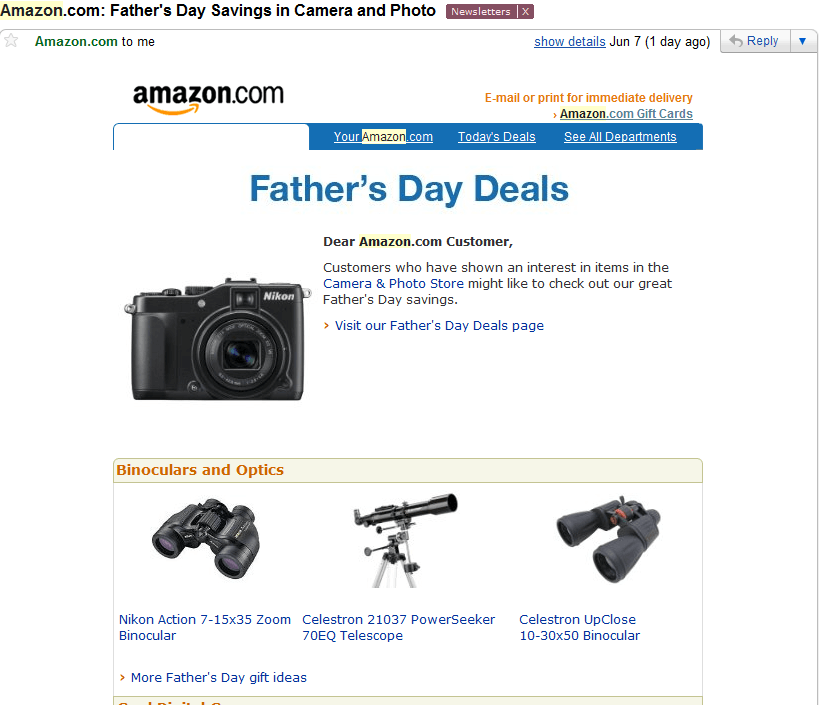 Nine emails, within 12 days, all about cameras.

Key lesson: In most cases, a single email isn’t going to be enough to convince a prospect to act. Repeated, targeted follow ups is going to make a lot of difference, however. Most email marketing services can now be integrated with your website, making it easy to kickstart campaigns based on actions users take on your website. Be sure to leverage this and take follow ups more seriously.

Amazon doesn’t employ its recommendation engine on its website alone; it also relies on it when it comes to its email marketing. Shortly after purchasing a book about stoicism on Amazon, I started to get emails like the one below:

Amazon doesn’t just send emails for the sake of sending emails; sometimes, as evidenced by the case study of the user that got nine emails in 12 days after searching for cameras, you might get a lot of emails all around the same time from Amazon. At other times, Amazon might be silent for weeks.

One thing instantly clear about Amazon’s emails, however, is that these emails are influenced by your activities on Amazon’s site as well as your interests -- ensuring a higher likelihood of you responding to the emails.

A particular study by MarketingSherpa found that sending targeted, segmented emails can yield as much as a 208 percent increase in conversions compared to simply sending “batch-and-blast emails.”

Key lesson: Segment your subscribers based on interest, and only send them emails relevant to their interest and activities on your site.

Finally, what makes Amazon stand out when it comes to email marketing is its “less is more” approach.

Once Amazon has established what a user’s interest is based on activities on its site, it goes straight to the point: no wordy emails trying to convince you to take a certain action.

Amazon’s emails are often simple emails like this one: 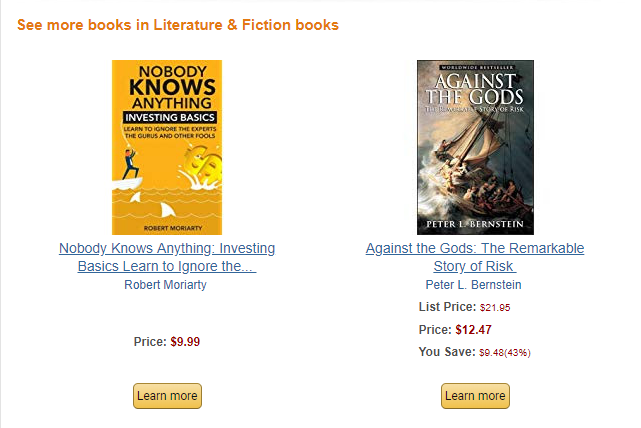 The only information included is the title of the recommended product, an image, the price, and a link to learn more. That’s all you need to know. No wasting your time or waxing lyrical on you trying to convince you.

When it comes to getting users to review products they purchased, too, Amazon uses a similar approach.

Key lesson: Don’t waste users’ time in your emails. Wordiness does not necessarily equate with persuasiveness. Provide only the information necessary to make a decision, and ensure that your CTA stands out so that users can easily see it and head over to where they need to do what you want them to do.

Your Mileage May Vary

In conclusion, your mileage may vary: most of what Amazon does is influenced by a lot of tests and large data sets. However, it is important to note that several things make Amazon different: these include its brand value as well as the fact that it is an everything store. You might have to adjust a few things depending on your business model. However, most of what Amazon does when it comes to email marketing isn’t by accident, and the same principles can be used to help grow your business.

Use this template to strategically organize your email marketing.