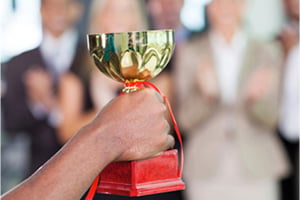 On April 29, Facebook announced the winners of the third annual Facebook Studio Awards -- Facebook's way of recognizing brands and agencies from around the world creating great campaigns.

With 1.28 billion monthly users and access to a trove of consumer data, companies of all shapes and sizes have integrated the social media platform with their marketing in an attempt to attract and engage today’s digital consumers.

The winners of this year's Facebook Studio Awards were selected based on three criteria:

So, without further adieu, here are the companies and agencies who created the most engaging and successful campaigns on Facebook in the past year ...

Blue Awards: The Best of the Best

This year, the average 30 second advertisement slot during the Super Bowl cost four million dollars. The “If We Made It” parody campaign was Newcastle Brown Ale's creative way of stealing the spotlight at a fraction of the cost. Newcastle's "If We Made It" Campaign satirically showed the world what their Super Bowl campaign would have looked like, if only they could have afforded to actually create it.

The campaign featured teasers for the ads they would have made. They announced actress Anna Kendrick and football Hall of Famer Keyshawn Johnson as the stars they would have used in their commercials. Newcastle even released the storyboards and the footage of the focus groups that would have been, for the campaign that never was.

Amnesty International is a New Zealand-based human rights organization committed to the civil liberties of every person on Earth. The purpose of the Trial by Timeline campaign was to highlight that a person's civil liberties should never be taken for granted.

Trial by Timeline analyzed Facebook users’ personal profiles, looking at who you were friends with, everything you had ever Liked, posted, or written, as well as all of your personal information. Then, taking into account everything that you had ever said or done on Facebook, Trial by Timeline sentenced Facebook users to hundreds of punishments that they would have received in various parts of the world.

The campaign has attracted 340,000 unique visits with an average visit duration of 7:27 minutes, and increased the Amnesty International New Zealand Facebook community more than 500%.

Gold Awards: The Best of the Rest

The Bentley Burial campaign was designed to draw attention to the problem of burying healthy organs that could be used to save lives. In order to achieve this goal, Brazilian millionaire, Count Chiquinho Scarpa, posted on his Facebook Page that he was planning to bury his half-million-dollar Bentley. Scarpa then used his Facebook page to convince Brazilians he was serious by posting pictures of the preparation for the burial.

The campaign drew remarkable media coverage. On the day of the burial, Scarpa announced in front of all of Brazil's major media outlets that he would not actually bury his car. He then used the opportunity to draw parallels with the car burial, and organs being buried when they could be used to save lives.

The campaign reached more than 172 million people through social media and organ donations increased by 31.5% in a single month following the Bentley Burial campaign.

Try My Hybrid is a service featuring real Norwegian Toyota hybrid owners who allows strangers to test-drive their cars at no cost. Toyota then turned to their Facebook page to promote the campaign and to recruit hybrid owners to take part in the Try My Hybrid service.

The campaign resulted in 1.65 million unique visitors to the Try My Hybrid website as well as hundreds of PR stories and a number of awards.

The NAB, a major sponsor of the Australian Football League, noticed that despite being the third most multicultural country in the world, their biggest sporting events were still only being broadcast in one language.

FootifyFM culminated in a live broadcast of the 2013 AFL Grand Final in Australia's 10 most popular languages. The site used Facebook to find commentators for each of the 10 languages and to build awareness of their initiative to bring Australia's national sports everyone.

The Léon Vivien campaign was carried out entirely using a Facebook company page. However, rather than create a typical company page, the page focused on telling the personal story of Léon Vivian, a man who lived through WWI. The page was treated as if it were 1914 again and Léon was updating the page himself discussing his thoughts and sharing images with the world.

The Facebook page attracted 50,000 fans in just two weeks as well as 7,500 shares and 6,500 comments. The Museum of the Great War saw a 45% increase in museum visitors following the Léon Vivien campaign.

For decades, Sport Chek's promotions were featured exclusively on their paper flyer. The company realized that people were no longer reading the paper flyer and that their target market of 18-34 year olds was consuming most of their media online. In order to reach this demographic, Sport Chek created the Social Flyer -- a digital version of the paper flyer -- on Facebook.

Sport Chek has engaged an audience of more than 700,000 fans and saw a 1.6x positive return on their Social Flyer campaign.

4) Facebook for Good Silver Award: The Most Powerful Arm

Client: Save Our Sons

To raise awareness about Duchenne Muscular Dystrophy (DMD), a disease suffered by young males that results it loss of motor function in the arms and legs before the age of 13, Save Our Sons created "The Most Powerful Arm Ever Invented."

The mechanical arm signs signatures on a petition to the government asking them to match all donations dollar for dollar.

Anyone can sign the petition by going to TheMostPowerfulArm.com and allowing the website to access their basic Facebook information. People can then watch as the robotic arms signs their name on the petition via live stream. A picture of their name is then immediately posted to their Facebook timelines to help spread awareness about the campaign and to encourage others to sign the petition as well.

The campaign generated over 6.5 million Facebook impressions and, more importantly, resulted in over 32,000 signatures.

Every day for the last two weeks leading up to the launch, Samsung gave people who had signed up for the virtual line features of the new product to promote via their social media accounts. The more engagement people's posts generated, the further ahead they would move in the virtual line.

The campaign resulted in 51,728 Facebook stories and the total number of people reached through organic sharing on social media was 15,345,413.

When tasked with selling the new burger, the advertising agency realized that the biggest problem would be to convince people to order the new burger despite its challenging name.

To spark conversations and awareness about the new burger online, the agency decided to butcher the pronunciation of the bun in their own advertisements. As expected, the ads received thousands of comments from people eager to criticize the advertisers for their mistake.

The magazine Femina India created the first fully crowd-sourced magazine issue by giving Indian women the chance to run the magazine themselves.

All of the action was captured using GoPro cameras and relayed to the Facebook audience via live stream. By engaging with the Playland site and content, fans were given more control over the teens and fans could also play trivia games to win prizes.

When McDonald's discontinued their angus burger, their customers took to social media to voice their discontent. Carl's Jr. & Hardee's saw this as an opportunity to go after some of the McDonald's customer base.

Hornbach announced on its Facebook page that it had purchased a tank, but did not reveal what the tank was actually for. Through Facebook posts highlighting the transformation, Hornbach slowly revealed that the tank was being transformed into a new product, the Hornbach Hammer.

There were only 7,000 Hornbach Hammers created and the first sales were limited to Hornbach Facebook fans. The awareness created on Facebook caused the hammer to sell out just two hours after it officially went on sale in stores and online.

5) The Longest Bench In The World 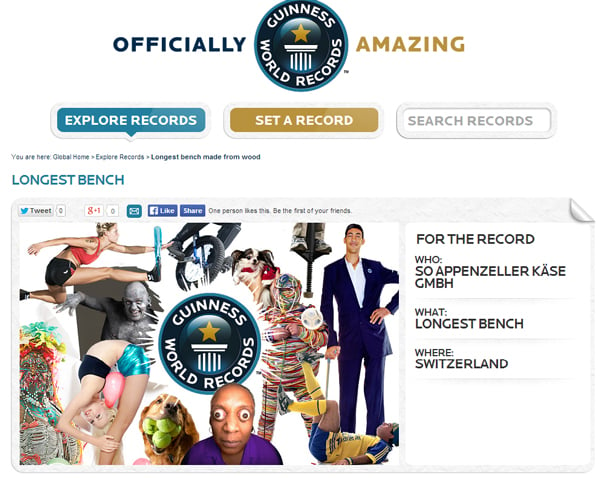 Appenzeller cheese advertises their famous Swiss cheeses with three herdsmen on a bench in Appenzellerland Switzerland. The company used their Facebook page to invite their fans to participate in the attempt to break the world record for the world's largest wooden bench.

Through Facebook, Appenzeller fans could reserve their own personal seat on the bench and view step by step images of the construction. Within just a few days, 660 meters of seating on the virtual bench had already been reserved by fans.

Throughout the course of the campaign, Appenzeller attracted more than 6,000 new fans, a 150% increase, as well as half a million people from 66 countries around the world that became aware of Appenzeller cheese as a result.

Which of these campaigns is your favorite?