One of the big themes for me in 2017 was what it means for marketers to do the right thing. Outbound marketing that relies on spamming, irrelevant advertising, and other tactics that are almost as bad for the business as they are for the customer is obviously not the right thing. Better analytics has brought a lot of focus and measurability to marketing, but creates the tendency to do what’s best for the business versus what’s best for the customer. 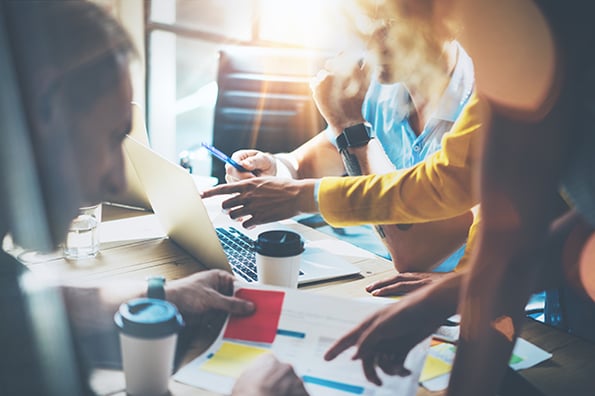 And even well-intentioned inbound marketers who are trying to pull versus push ... well ... sometimes we just pull a little too hard.

It’s hard for goal-oriented, data-driven marketers to stop doing things that hit the numbers ... even if we know these tactics fail to create the best experience for our prospects or scorch the earth for future efforts.

One of our goals as a marketing team in 2017 was to push ourselves to do the right thing, even if that meant more difficulty for us or even missing our goals. It was a tough year and yes, we missed some numbers, but wow ... we also learned a ton, and I wanted to share some of our biggest lessons here. I think they have big implications for marketers in 2018.

1. We can break our email addiction and still hit our goals.

Marketers have been touting the death of email for years, and while I wouldn’t say the channel is dead, you’ll be hard pressed to find a marketer who will argue that engagement on email is what it was five years ago. At the start of 2017, HubSpot’s CMO asked our team to see if we could break our addiction to email.

Could we shift conversations to emerging platforms like Facebook Messenger, and cut our reliance on email? The answer was a resounding yes.

In 2017, our team cut email volume in North America by 50% while increasing engagement by 28%. That’s wild.

One tactic our team used to achieve this was moving from two weekly email sends per week to one and then focusing on making that one send count: better segmentation, lots of testing, and creating more interactive content (like the webinar promotion email that includes a countdown shown below).

2. Offsite messaging has earned its place in inbound marketing.

Another one of the reasons we have been successful at reducing our reliance on email is that we got serious about testing emerging channels. Here’s an offer email we sent earlier this year that gives people the option to access content via Facebook Messenger or a form: 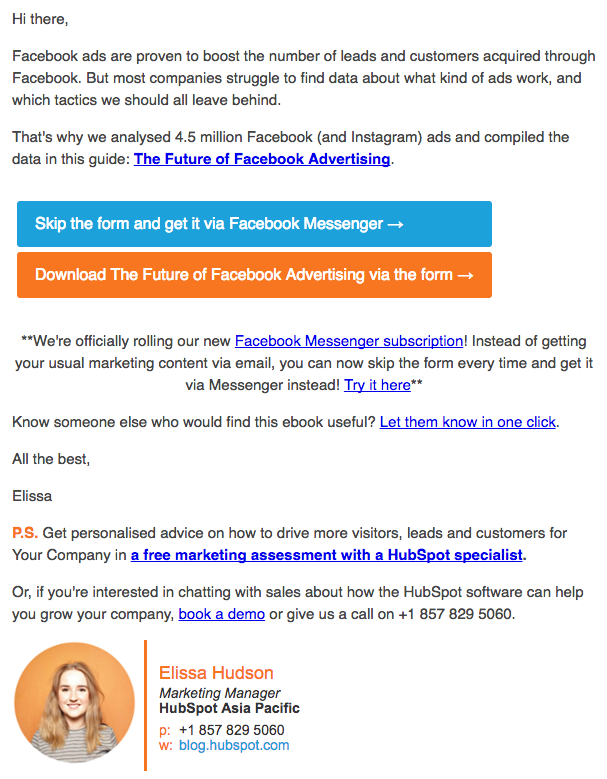 For the past decade, lead forms have been the go-to way for prospects to express interest in working with your company. But just because something has worked, doesn’t mean it will keep working.

This year HubSpot’s marketing team got very serious about testing alternatives to lead forms. We rolled out onsite messaging across our entire website. 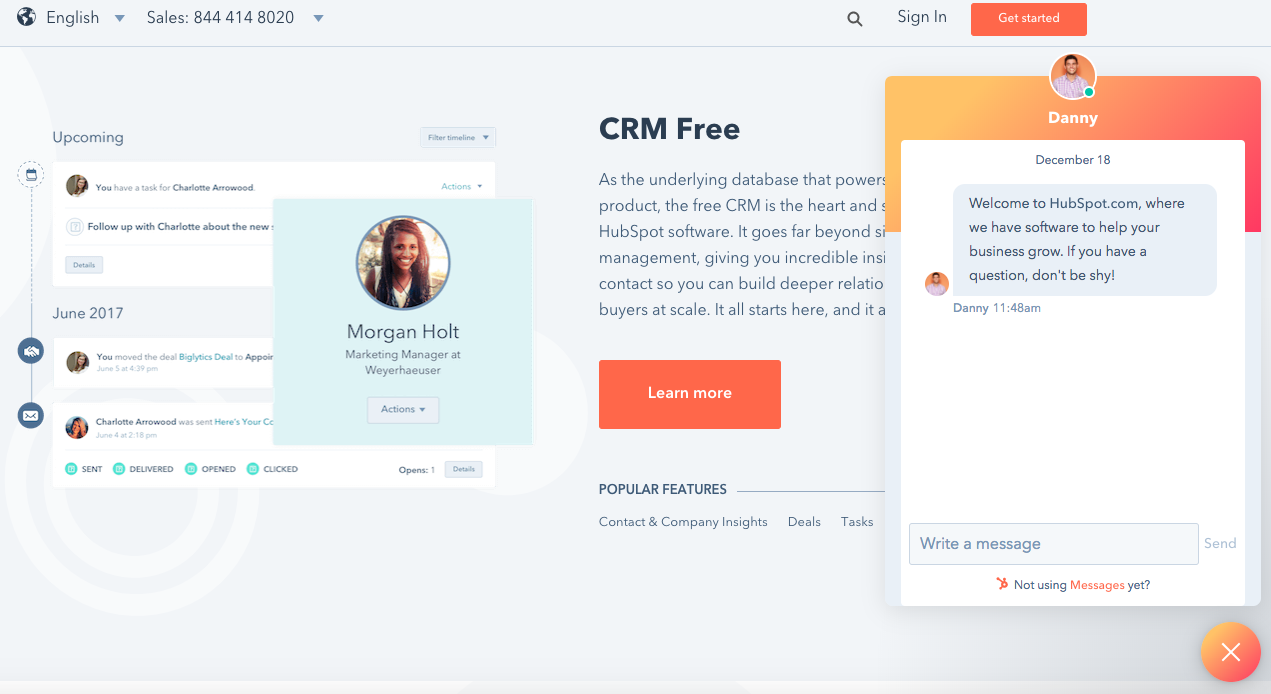 Yes, this meant hiring more salespeople to respond to the influx of one-to-one communications.

Yes, this meant responding to a lot of irrelevant inquiries with a personal, human response.

Yes, it was expensive and took some internal training and systems finagling.

Customers today expect to get answers to their questions right.now. For serious buyers, a lead-form is just too long of a delay. And all of the short-term costs will decrease as we get more serious about chatbots. Onsite messaging is now an integral part of our inbound sales playbook and we’re looking to start even more conversations in 2018.

But there’s a high probability he stole this aphorism from T.S. Elliot.

Regardless of credit, what’s true for artists is true for marketers: Copying is one of the fastest ways to get good at something really quickly.

The problem is that you very quickly end up in a world where every marketer is doing the same thing. So sometimes, doing the right thing as a marketer means intentionally separating from the herd.

We started The Growth Show back in 2013, and “boring” is probably an unfair descriptor. Actually the show has built an engaged core audience, but it never turned into the kind of massive audience builder that consumer podcasts can be. We gave ourselves a pass, it’s a B2B podcast, right?

But in 2017, our growing podcast team pushed us to get a little weird, launching a podcast called Weird Work where we interview professional mermaids, ASMR content creators, and writers of dinosaur erotica. The reception to this little series has been so cool:

It’s tough to measure the business impact of such a “brand” play, but one way to think about content like this is in terms of ad spend. You can pay to advertise on someone else’s podcast or you can create your own audience and advertise there. We calculate that the value of the Weird Work audience is equivalent to $12,000 in ad spend every month.

Sometimes not following the herd pays off in a big way.

5. The future of SEO is topic clusters.

Google has been moving toward rewarding creators who create topic clusters for some time. This means that instead of Google looking at every individual post as its own SEO opportunity, it now looks at the scope of content being created by a given URL and sends more traffic to people who appear to be experts on a given topic.

We’ve been shifting to this strategy for new content creation for a while. But 2017 was the first year where we began to tackle 10+ years of legacy content, and re-working our architecture to fit the topic cluster model.

Why did it take us so long? Because this work is hard! We actually started a topic cluster project addressing the resource site architecture back in January of 2016 and it was so complicated we had to table it. In May of this year, we finally pushed it live and the results were astounding.

In the months following launch, traffic to our resource pages increased by 107%.

HubSpot’s blog team has also begun to rework older posts around select topic clusters. Here’s the impact of one of the first clusters we did; check out that average rank going up and to the right:

The days of throwing content at the wall to see what sticks are officially over. Doing the right thing today means creating content only when it meets a demonstrated user need. (BTW, HubSpot also released a tool earlier this year that makes it easier than ever to find and create your own Topic Clusters).

Every marketer has felt the pressure to churn out offer after offer and our team has not been exempt from that pressure. It’s hard to place bigger bets on a smaller number of activities.

Our co-marketing team feels this pressure every single week. In a given quarter, this team typically executes 15-20 campaigns. But we finally stopped and said, what if we could do less and take bigger swings? So we rolled the effort of four to five campaigns into one big campaign -- 4 Days of Facebook.

This was hands down my favorite campaign from the entire year and all because our co-marketing team committed to doing fewer things better.

I’m excited about these results. But most of all, I hope the results we’ve seen in 2017 encourage you to be a little bolder in your strategy, to push a little harder for the right things (even if you’re unsure about the results), and to occasionally miss some quantitative goals in order to learn some big things.

Good luck out there!