This is How Blockchain Could Change Digital Marketing Forever

Some execs think it’s the future universal currency, while others consider it a “disgusting...noxious poison.” 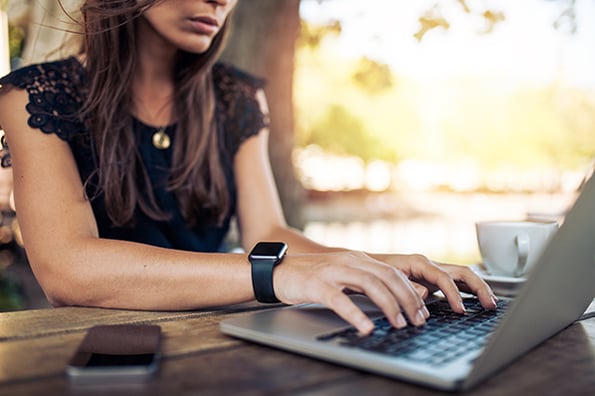 What could elicit such extreme feelings in complete opposite directions?

The price of the popular cryptocurrency has been up and down, shedding about 50% of its value in the first three months of 2018 before a slight recovery in the last two months. It’s a volatile investment, to say the least.

But the real story of Bitcoin and other forms of digital money isn’t their investment potential -- it’s the technology behind them. Blockchain, as explained in a helpful post from Mimi An earlier this year, is a method of digital record-keeping that creates a ledger of transactions that is transparent and impossible to tamper with.

Even some experts who are skeptical of Bitcoin itself believe that blockchain technology is here to stay. And that’s because despite its current volatile early stages, blockchain could fundamentally change the way that several massive industries operate – including digital marketing.

How could blockchain influence digital marketing?

Many facets of business and communication could be affected by blockchain, but much of the discussion to date has been about its impact on banking and financial transactions. While those two areas alone are significant, blockchain’s impact could go beyond currency and finance to affect marketers of all products and services:

Anyone can access the internet, but they have to go through traditional gatekeepers: ISPs and web browsers. These companies can learn almost everything we do online, from the things we buy to the articles we read to the people we talk to.

It’s great to think that these gatekeepers will always provide fair access to the web and do the right thing by consumers, but um, have you seen the headlines recently? Mark Zuckerberg has become the fall guy for a problem that extends far beyond Facebook: our personal data can easily be bought and sold to advertisers.

Blockchain could be a solution to this. A good case study for the data privacy problem is Blockstack, a network built on blockchain that touts itself as “a new internet for decentralized apps.” Because Blockstack’s network is built on blockchain-verified signatures, your personal data remains with you instead of existing on servers owned by your application. Visiting a site or using an app is like inserting a key into a lock: You keep a personal copy with you at all times, and once you place it in the lock, you take it out when you are done. There’s no running log kept of who used the lock and when.

Blockstack is just one example -- there are several other projects in the crypto space aiming to achieve a similar goal, most notably Skycoin, touted by its creators as the fuel for a new decentralized internet. This P2P network that Skycoin miners power, known as Skywire, will be the foundation for messenger protocols, apps, and other common functions of the current internet, with one big exception: All user data will be encrypted and protected.

Consider how marketing would change if us marketers didn’t have access to all the user data we do currently - it could happen sooner than you think. Without a plethora of information about each individual browsing you or your clients’ websites, you’d have to rely on gathering data directly from prospects and customers to fill in the gaps.

You’d also need to customize your user experience on the specific things your audience is looking for (though the best marketers are already doing this). That’s because blockchain could soon allow users to voluntarily decide what type of content and ads they want to see.

While marketers are getting results from them, there are some serious flaws in online display ads. From the perspective of the advertiser, they can be expensive and complicated to understand and manage. Also, the inventory is almost completely controlled by two for-profit companies: Facebook and Google.

The issues with digital advertising from the user perspective are well-documented: Display ads are intrusive, annoying, and can drain your mobile device’s battery and waste bandwidth.

The Brave blockchain browser with its accompanying Basic Attention Token (BAT) is attempting to fix all of these issues by changing the way users interact with ads. Brave founder Brendan Eich has already earned his stripes in the tech world - he created JavaScript in the 90’s during his time working at Netscape, and is the co-founder of Mozilla.

Brave and BAT, which is powered by blockchain technology, are aiming to break up the current monopoly on digital ads by allowing users, publishers, and advertisers to trade on the value of online attention.

1. Advertisers buy ads using BAT. These are usually private tabs in the Brave browser, but they can also be push notifications and landing pages. Brave’s dev team is aiming for fewer, but higher quality ads in the ecosystem.

2. Users who opt in to viewing ads are compensated with BAT. You get to decide which kinds of ads you see. Not only does this provide more accurate consumer information to advertisers (anonymously), it helps users learn about the products and brands they actually want to hear from. Anyone who volunteers to get ads is paid a portion of the advertiser’s spend in BAT, for the value of their attention.

3. Publishers are compensated by both consumers and advertisers. Under BAT’s revenue sharing program, publishers receive a larger portion of ad spend than consumers. They can also charge BAT for access to premium content and subscriptions.

It’s a win for all parties: Marketers get better ad performance data and targeting, publishers get more revenue and control over ads they display, and users get fewer, better-quality ads related to their interests - without compromising their personal data, thanks to blockchain encryption.

Most importantly, the value of attention is given back to its owner. Imagine buying a subscription to Harvard Business Review or The New Yorker simply by opting in to receive ads related to your interests.

It’s still far from an everyday reality, but this kind of digital advertising utopia could make marketers think more closely about their target audience when creating ads. Companies trying to gain attention from prospects will be forced to provide a valuable, or at least entertaining ad experience, since users would no longer have to receive them.

3. Ownership and Security of Digital Assets

Everyone knows the story: The rise of the MP3 and digital music led to widespread piracy in the late 1990s and early 2000s. The music industry pushed back, and for a while both sides were at a standoff.

The modern solution to this situation is streaming services like Spotify, Tidal, and Apple Music. But it’s a very flawed model: Artists are compensated fractions of a penny per stream, and the complexity of licensing in the music business means streaming service payouts aren’t always made to the proper party.

Blockchain could be the next step in the evolution of the creative digital economy. Projects like Po.et, Tao, and Steem were designed with this intent. Imagine if musical artists, filmmakers, and photographers could offer their work to a massive audience without paying an intermediary like YouTube, Bandcamp, iTunes, or Shutterstock for exposure and security.

Tao, for example, envisions a world where artists create their own communities through what they call an Initial Artist Offering (IAO). Your band would create and sell a certain quantity of a crypto token, like the digital version of a baseball card or vinyl LP. Once you’ve sold a set amount to fans, you can then offer special releases, live experiences, even physical band memorabilia, in exchange for your token. The more popular you and your music get, the more value your token will have, and since blockchain also records transaction dates, length of token ownership could also be a consideration in offering content and access. Finally, your annoying friend who brags about liking a group before they got big can get rewarded for it!

In March, Young Dirty (Bar-Son James), the son of Wu-Tang rapper Ol’ Dirty Bastard, became one of the first artists to actually create this type of community. His new Dirty Coin will be used for both his music and content owned by his father’s estate.

This blockchain-based entertainment economy could allow artists to market themselves directly to their audiences without ceding control of their work or a share of their revenue to a platform like Facebook or SoundCloud. It would allow artists and groups to get recognized based on the value of their work, not because they paid extra money to have their songs listed first on a music platform. This model would shift entertainment marketing even more towards P2P communities, since fans could conduct transactions themselves and earn special privileges for being holders of artist tokens.

It’s important to remember that these scenarios are ideal cases, based on technology and projects still under development. No one knows whether the vision of a blockchain-based world will become reality, especially since cryptocurrency is still in its highly-unregulated infancy.

But if even one or two of the commercial blockchain uses come to fruition, it could dramatically alter the way that marketers go about attracting buyer attention. One thing is for sure: With some of the brightest minds at the biggest companies working feverishly on cryptocurrency projects, there is sure to be lots of movement in the space over the coming months and years.