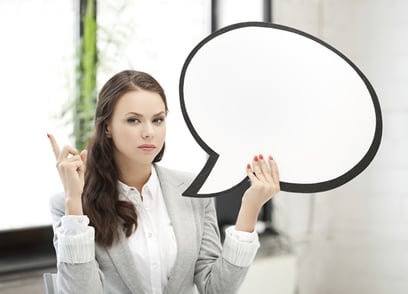 A couple years ago, my colleague Shannon and I were so tired of hearing those kinds of business babble words that we created an informal game of Business Babble Bingo. It was a subtle plea to end the ridiculous business babble that infects corporate-speak in meetings, presentations, and worst of all, on our websites.

Even now, we still see business babble infecting corporate communications. So, I thought it'd be fun to take some of the business babble I've stumbled across and translate it into human speak. Everyone loves a little before and after, plus, demonstration is a great educational tool. Take a look.

Awful Corporate Business Babble -- And What to Say Instead

A recognized authority in a certain subject matter is often called a "thought leader." However, you could also call them an "expert," "authority," or just ... their name.

An incredibly creepy way of saying someone shared information, "opened the kimono" might be better replaced with such simple phrases as "told," "shared," "revealed," or even the plain 'ol boring "said."

Technically, this is expertise that offers a competitive advantage, though it's often just used to indicate expertise. You could call this, well, "expertise" -- or perhaps a "unique skill" or "differentiator" if you're going for the original definition.

As you know, unicorns are his core competency. >> He knows a lot about unicorns.

4) Coming Down the Pike

Another way of saying something's going to happen in the future, you might find it easier to just tell someone something is going to happen. "Expect X" or "You'll hear about Y soon" are also perfectly acceptable, boring as they may be.

The implication here is that you'll start an ongoing discussion that's a two-way street, instead of offering a directive with no opportunity for discussion. However, there are simple phrases like "ask," "talk to," and "meet" that work just as well.

My team should start a dialogue with your team. >> Our teams should talk.

The word every editor changes to "use." Just say "use."

If you're in finance or work with heavy objects for a living, you get a pass on this. People in business, however, tend to use this to mean they're making use of a good resource, even though "make use of," "use," "help," and "rely on" do the trick quite nicely.

If anyone ever says "let's whiteboard it," they're about to hold the meeting hostage with a dry erase board and a marker. If, however, they ask people to "brainstorm," "think through," "lay out," or "talk out," an idea, things should be alright.

Someone once asked me my biggest regret. My answer was using the word "ideate" in a blog post. Just say "think of," or "come up with ideas."

Our teams need to meet for an ideation session. >> Our teams should meet to come up with some ideas.

A generic phrase used when we aren't sure what the "next level" actually is. Sometimes, we're not even sure what "it" is. Instead, say "improve X by 10%" or "make Y better by changing the copy" -- being specific about what you want changed, and what exactly constitutes an improvement.

I think learnings are the things you learn after you learn something. You could just say "I learned," or "the takeaways were."

Let's put our learnings together after the meeting and share with Andrea. >> Let's tell Andrea what we learned.

A phrase that simply means you want to be the best has turned business into the Westminster Dog Show. Consider alternates like "standout," "top," or, simply, "best."

She wants to remain a best-in-breed company. >> She wants our company to remain the best in the industry.

Calling something a paradigm shift is not babbly in and of itself. The problem is that it's usually used to describe things that aren't actually paradigm shifts. So the phrase has lost all meaning. Unless something is actually changing the most basic assumptions off of which we base our decisions, maybe just call it a "big change."

Our industry is facing critical paradigm shifts. >> There are some big changes coming in our industry.

Just as adorable as ocean boiling, needle moving is all about showing more of those ROIs. Except it might be better to say you're trying to improve a specific, measurable amount.

The phrase I find most inane, "out of pocket" is a way of saying you'll be unreachable. Of course, my recommendation would be to say you are "unreachable." No need to bring your pockets into this.

Noodling something can be less creepily described by phrases such as "I'll think about it," or "Let me think of some more ideas." (Please don't use this as an opportunity to bring back "ideate.")

Ah, another office sports analogy. If you "punt" an idea, you might consider just "postponing," or "putting it off."

Want to meet about something again at a later date? Talk later? Reconnect? All better options than the babbly "circle back."

We should circle back on this once we've talked to John. >> We should meet about this again after we talk to John.

These may all sound like nit-picky things -- and on a one-off basis, maybe they are. But when you hear one piece of babble after another, it starts to sound a little like this ...

I just got back from coffee with a thought leader. He was kind enough to open the kimono a bit about his new book. As you know, unicorns are his core competency, and he seems to think there are some new things coming down the pike. I think my team should start a dialogue with your team about it. I want to make sure we can utilize both our strengths to address the changes since we both have a lot we can leverage. It might even be good to get in a room and whiteboard it all out so we both have a chance to ideate together. If we really want to take it to the next level, we could put our learnings together into a presentation for the CEO so we can stay a best-in-breed company amid our industry's shifting paradigms.

Anyway, don't want to boil the ocean here, just want to set us up to move the needle. I'm out of pocket the next two weeks, but feel free to noodle on it while I'm gone. We'll punt it until I get back and I'll just ping you then so we can circle back on all this.

I just got back from coffee with John, who was kind enough to give me a sneak peek of his new book. He wrote about an upcoming change in unicorns that I think our teams should be prepared for. Between the two of us, I think we have the resources we need to address it, but if not we could put together a presentation for Andrea on what we'll need -- I know she's concerned about staying ahead of unicorn trends.

I'm going on vacation for the next two weeks, so I'll set up a meeting with you for when I get back. If you think of anything while I'm gone, feel free to put it on the meeting agenda.