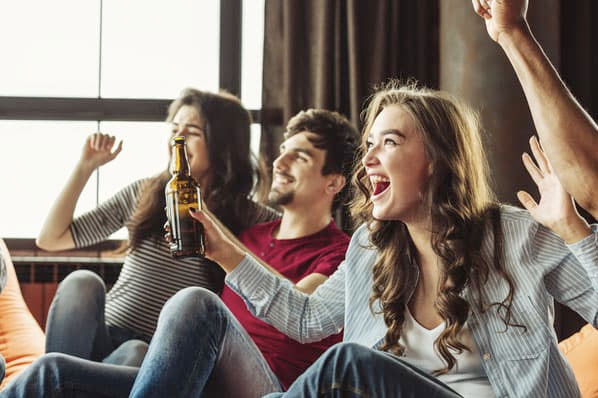 Each year, the Super Bowl teaches us a lot about healthy competition. But -- we don't always see it play out on the football field.

In fact, when the commentators send us to a commercial break, that's where some of the biggest game-day face-offs take place. While football teams compete for trophies, companies spend millions trying to get more views, leads, and revenue than other brands advertising in their industry on the same day.

Think about it. When haven't you seen 10 competing car ads during one big game?

And, despite the noise of dozens of ads with blockbuster budgets, viewers might only recall just a few commercial spots.

If you're a video marketer, even for a small brand, you can learn a lot from the top Super Bowl ads. Although they have budgets we couldn't imagine, they still leverage creativity and cleverness that have allowed them to grow mass awareness and stand out among their fiercest competition.

To help you zone in on key takeaways from the Super Bowl ads that resonated most with viewers, we asked more than U.S. 150 consumers to vote on their favorite big-game ads within three major product categories this year.

Below are three consumer favorites, plus takeaways that any marketer can leverage to fend off their biggest competition.

Everyone wants to keep up with the Joneses, aka the cool family, click, or group in the neighborhood that has all the best stuff. That's potentially why 24% of consumers we surveyed enjoyed Toyota's ad over other auto-company Super Bowl commercials.

Toyota plays up the relatable need to keep up with the people you idolize by showing some of the most famous Joneses, including Rashida Jones, Tommy Lee Jones, and Leslie Jones, racing in Toyota Tundras. Quite literally, everyone in this ad is trying to keep up with the Joneses. When the race ends, the Joneses are surprised to see popular musician Nick Jonas pull up and say, "It's keeping up with the Jonases now."

While this commercial was boosted by a lot of star power, it's easy-to-understand storyline offered a witty, yet effective message – "to keep up with the cool people, you'll want to buy a Toyota Tundra."

If you want to create a video marketing campaign that uses a similar strategy, consider telling stories of credible, notable, or somewhat popular people, micro-to-macro influencers, or thought leaders in your industry – and how your product has benefited them. This will boost trust and credibility towards your product or service, intrigue the fans of the people in your campaigns, and also let your audience know that people they strive to be like or learn from are using your offerings.

One of actor Jim Carrey's classically funny films was The Cable Guy. In the 1996 movie, Carrey's character becomes infatuated with a client he's fixing the cable for and keeps finding more fake reasons to fix the man's cable and bond with him in his apartment.

During the 2022 Super Bowl, Verizon creatively plays up the film's nostalgia by bringing back the somewhat-elusive Carrey for a mini-reboot where he comes to an apartment to set up a prospect's cable and finds that she's using Verizon 5G instead.

The cable prospect shows Carrey her internet setup and counters comments he offers, such as, "You must be locked into quite a contract." and "This might be illegal… I'm gonna need to know who installed this! Who set this up?" As Carey's character finally understands the value of Verizon 5G, he puts his hand up in the air and – kind of – admits defeat by saying, "Reception's good, but I'll be back tomorrow to check.

Although some viewers might not have seen the decades-old film, most people at least understand the ordeal cable customers face when trying to cut chords. As someone who's tried to cut cable out of my life, I've been put through almost the same line of questioning by a cable company's customer care team.

Ultimately, while Jim Carrey and the ad's storyline make the commercial nostalgic, attention-grabbing, and fun, its message is still valuable and relatable to anyone who has or has had cable – even in 2022.

While most food and beverage brands focused their ad slots on their product during the Super Bowl, Budweiser – famous for its Clydesdale mascot – chose a different route. And, with most of the consumers we polled (18%) picking this ad as their favorite food or drink company commercial, Budweiser likely made a good choice.

Budweiser's ad tells the story of a Clydesdale that hurts its leg in a jumping accident. The horse lies and moans sadly in a barn for days as farmers and a concerned dog look on. Just as the farmers, and Clydesdale's dog friend, begin to show lost hope, the horse finds the strength to get up, walk out of the barn gallantly, and run full speed through pastures again.

The commercial's end text reads "In the land of the brave, down is never out."

The ad from Budweiser, which didn't buy space during last year's Super Bowl, shares a story of hope and optimism which is also a metaphor for national resiliency and how America will eventually heal following years of difficult times and pandemic-related uncertainty.

Although Budweiser's ad doesn't highlight a product, it tells a memorable, relatable, and empowering story about the brand's well-recognized mascot and enables the brand to flash its logo with viewers feeling entertained and hopeful. This is a great example of how a narrative can create an interesting break from a saturated stream of food brands – and stand out among consumers.

While all the ads above featured celebrities, the stars didn't necessarily make these ads stand out among consumers in an already-crowded stream of celebrity-filled ads.

In fact, the three ads highlighted above shared the following themes.

Even without a million-dollar ad budget, you can keep these themes in mind, and create scaleable affordable video content that caters to them and really draws your audiences in.

Inspired by these ads, and want to revel in some of the best Super Bowl commercials of all time? Check out this post to learn more from the greats.