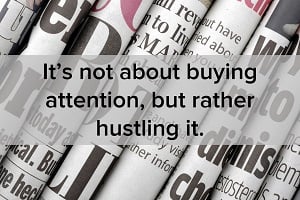 Digital and social media kicked up quite a bit of dust when they first joyrode through marketers’ once-tidy offices. Many previously held truths didn’t survive the frenzy -- and the few that did now walk with a limp. 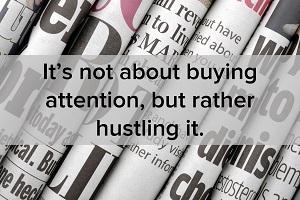 To make sense of marketing’s new reality, thoughtful observers returned to first principles and re-examined the nature of media itself.

Change-agents like David Armano and Sean Corcoran revisited the fundamental question, "What is media?" and concluded that the interactive era was comprised of three classes of media -- owned, paid, and earned -- and advised marketers to match engagement strategies to each type.

The thinking goes a little something like this: Owned media consists of your company’s website, landing pages and social media outposts. It tends to serve as the marketing team's "center of gravity," or the point where conversions first occur.

Paid media (everything from search and display ads to promoted content on social networks) requires monetary exchange for message distribution. These placements can be an effective way to procure new leads or re-connect with contacts that have disengaged.

Although all media classes are evolving, some changes are more accelerated than others.

Owned media, for example, has progressed incrementally over the past few years. Certainly, there have been enhancements to all of the channels on which brands maintain a presence, but the fundamentals of owned media have been relatively stable.

Earned media is different. Perhaps because of its reliance on highly disrupted industries like print and broadcast news, earned media is arguably the most fluid of the three classes.

Whereas a generation ago, there was one PR professional for every journalist, today that ratio is about four-to-one. There simply aren’t enough writers -- or publications -- to report regularly on every business’ news, limiting "earned" opportunities to a finite number of must-cover companies. (Perhaps this is why both public relations executives and reporters both rank among the top 10 most stressful professions.)

The Birth of Hacked Media

Necessity, however, is the mother of invention. Earned media constraints are giving rise to a new class of media: hacked media, or generating coverage by "rewiring" the way stories are published. Similar to earned media, hacked media requires no monetary transfer. It’s not about buying attention, but rather hustling it.

There’s no single way to "hack" media. It is, by definition, a bespoke process. But there are techniques that have proven effective.

For example, attaching your brand to a real-time news event, sometimes called newsjacking, is a reliable way to elbow your way into media coverage. Author David Meerman Scott’s book on the topic describes how companies of all sizes have injected their names into breaking news to enjoy media attention that their products were never able to generate.

Content-led communications is another hack. I previously ran marketing for a startup. When we moved our office from Cambridge to Boston, management expected the local media to cover the "news." Instead of pitching the sure-to-fail "company moves three miles" story, we instead created a map of all the hot startups in Boston and equipped all of the featured companies to embed the image on their blogs. They did. And the frenzy of social sharing attracted The Boston Globe, which featured their version of the map in that Sunday’s Business section.

Another reliable hack is incorporating the writer into the story. While this ego-driven approach is generally more effective with individual bloggers than it is with commercial news sites, premium content -- like a professionally designed infographic -- that visualizes the work of the publication can sometimes result in wide-reaching social shares, if not an actual article.

Finally, creating a groundswell of support among influencers is another way at the media.

I advise a company called Little Bird, and I use their product, essentially a search engine for influencers, to identify the people who are most trusted on a given topic. Then, when I have a product or content that relates to their sphere of influence, give them a preview of our story. The key here is to select influencers on niche topics because they are trusted by insiders, like journalists and analysts, but their profile remains "below the radar" of your competitors.

In the end, what does it all mean? It means earned media faces an oversupply problem. The standard PR playbook will produce diminishing returns because it’s like increasing inventory when there aren’t enough retailers to stock your product.

PR traditionalists may bristle at the notion of "hacking" the media, but the alternative -- a complete Apple, Facebook, Google, and Marissa Mayer media takeover -- is far more troubling.

What are your views on the growth of hacked media?