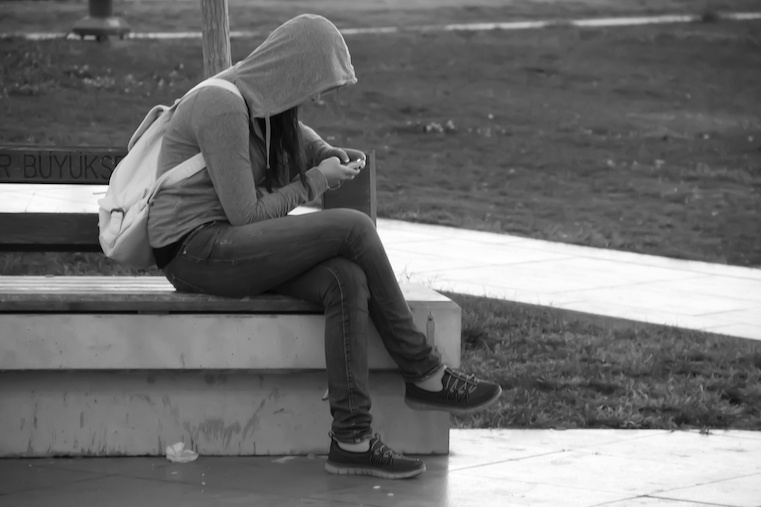 It’s fair to say that Facebook has experienced some turbulence in 2018.

As the year draws to a close, looking back at the bumps in the road for Facebook over the past 11 months makes it difficult to believe that, well, it's only been 11 months -- to the point where It's difficult to encapsulate the 2018 ups and downs experienced by Facebook in a single paragraph.

The year kicked off with a major News Feed algorithm change in January to prioritize posts from users' friends and family over those from Business Pages. By August, engagement with these Pages had dropped by up to 50%. In the spring, details emerged on the improper harvesting of private user data by a voter profiling firm -- leading Facebook's CEO Mark Zuckerberg to appear before Congress in two high-profile hearings. In November, the New York Times published a report that the company's leadership had not only actively worked to hide these issues (instead of fixing them), but also hired a PR firm to portray Facebook's critics in a negative light.

And that's only a selection of some of the bigger stories about Facebook from 2018.

Think you’re having a bad year? It’s probably not as bad as Facebook’shttps://t.co/unNh2GldHl

But with every new announcement and report, it seems that it isn't quite enough for people to part ways with the social network for good. After many of these events, we ran surveys to determine if it they were enough for users to delete or deactivate their accounts, and every time, there was a consensus: "No, I'll stay."

To find out why, we decided to go directly to users themselves and ask, "Look at the year this company has had. What's keeping you around?"

In our most recent survey to measure user sentiment toward Facebook, we provided a short summary of the company's alleged scandals over the past two years for 643 people across the U.S., UK, and Canada, followed by a key question. It read:

"Over the past two years, Facebook has been plagued by a number of scandals. These include foreign actors using the site to spread misinformation and influence major elections, voter profiling firms improperly obtaining private user data, and a major data breach. There have also been reports of company leaders actively trying to hide these issues instead of fixing them, as well as hiring a PR firm to help make critics of the company look bad. However, our research has shown that despite all these issues, very few people have deactivated or deleted their Facebook accounts. What are your reasons for continuing to use Facebook, despite these issues?"

In previous instances this year, we've speculated that, for most users, the cost of losing the connection to friends and family provided by Facebook is too high when compared to the cost of the company's issues.

That was confirmed by the responses we received to this survey.

The highest number of users -- about 45% -- indicated that they haven't left Facebook due to their personal lives being too intertwined with it.

When we ran one of our earlier sentiment surveys in October, Likeable Media CEO Carrie Kerpen pointed to Facebook growing as a source of connections to relatives, for instance, who may not have previously considered using social media at all.

"Your Grandma is likely not on Twitter, but she's on Facebook now," Kerpen said at the time. "It's easy to use Facebook, every one is on it, and it's widely adopted."

At the same time, some users say they have simply accepted that using social media comes with the cost of their privacy being protected. 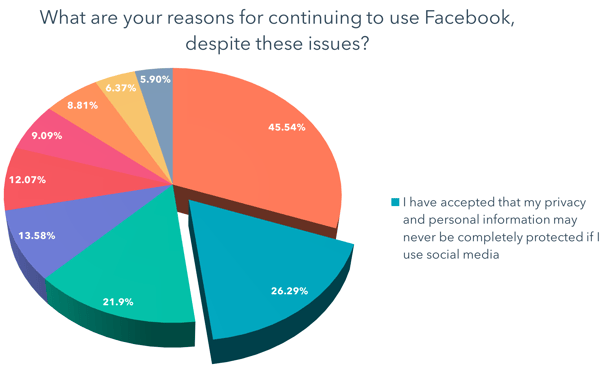 That was the second-highest response we received, with over a quarter of participants selecting the answer: "I have accepted that my privacy and personal information may never be completely protected if I use social media."

This response could indicate that many users have simply come to terms with a potential lack of privacy as a result of having a presence on any social apps. That was one thought that HubSpot VP of Marketing, Jon Dick, had about the seemingly lack of shock among respondents earlier this year when we surveyed them about a Facebook data breach.

"People just assume that their data is constantly breached," Dick told me a few days after news of the breach first broke. That's why it's possible that "the Facebook news didn't even alarm people."

Benefits Beyond Friends and Family

If that's true -- that social media users simply assume and acquiesce that their personal data will always be compromised as a result of using it -- that impression could lend itself to other reasons respondents indicated for maintaining a presence on Facebook.

For example, the third-highest number of responses we received were from users who said that the other benefits provided by Facebook -- such as getting news or discovering other new content -- outweighed any problems the company might have.

Just over a fifth of respondents answered, "The overall value Facebook provides me -- like being able to discover news stories, watch videos, or follow brands -- is greater than any concerns I have about the company itself."

That aligns with a point made by HubSpot VP of Marketing Meghan Keaney Anderson regarding user alliance to Facebook, when we discovered that many still didn't plan to delete their accounts upon learning of the aforementioned data breach.

And as per Kerpen's point, Facebook in particular serves as "a primary connection point to family members, to news, to society at large," Keaney Anderson said at the time. "And for now, there is no viable replacement to that."

But Facebook's seemingly irreplaceable nature wasn't one of the more popular responses we received, with only 9% of people answering, "I don't think there are suitable alternatives to Facebook that could do a better job at protecting my privacy and personal information." 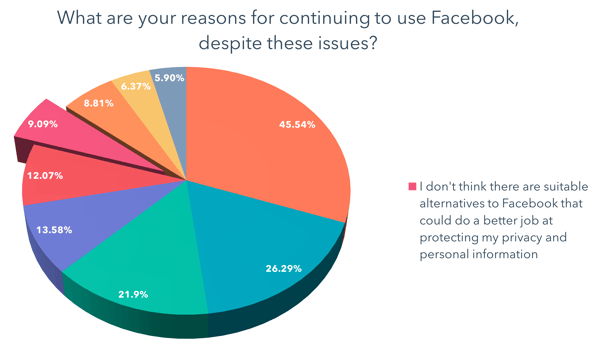 As 2018 draws to a close and the roller-coaster it's provided for the tech industry at large (Facebook hasn't been isolated in its controversy), we find ourselves looking ahead at its potential ripple effect.

Although users mostly say they're not leaving Facebook, the company's growth has all but come to a screeching halt in some regions -- namely, in the U.S. and Canada, which are its largest markets for (advertising) revenue.

With new users plateauing in its most lucrative markets, some speculate that Facebook is on something of a warpath to find new revenue streams, such as introducing ads to WhatsApp: the encrypted messaging app it acquired in 2014. Instagram, too -- which Facebook acquired in 2012 -- is viewed by many as a social plethora of ads, and has been identified by some as something the company will heavily rely on for revenue in the near future.

So, what does all of this mean for marketers and small-to-midsize businesses?

While active user growth in certain regions may have slowed, the fact that most of Facebook's core users have yet to leave the network likely means that it's still one of the best places for marketers to reach audiences.

That hasn't stopped other companies from building out tools and resources for businesses that are similar to those provided by Facebook. For example, Google recently introduced new features to its Google My Business app that emulates some of those provided on Facebook Business Pages, such as the ability communicate with customers via in-app messaging. 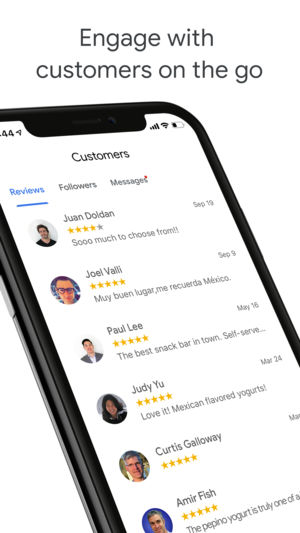 But when all is said and done, Kerpen says, it could be quite some time -- if ever -- that business tools provided by other platforms begin to rival Facebook's.

And as we look ahead to 2019, it seems that Facebook continues to serve as a resource valued by users and businesses alike -- one that, despite its issues, upholds a high barrier to being replicated or replaced.