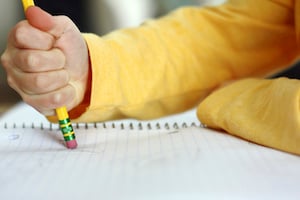 Although none of us are perfect, spelling and grammar matter in marketing. (And sales, too.) Consistently correct grammar makes your content more credible and could impact its performance, too. Just look at what happened to NBC.

But there's a lot of conflicting advice out there about what things are (and aren't) grammatically correct. To help us all get on the same page, we'll debunk seven common grammar myths in the post below.

Myth #1: You shouldn't end a sentence with a preposition.

"Which building is he in?" "Bob has a lot to be happy about."

In casual texts, social media posts, and emails, I've always been totally cool with stranding prepositions at the end of sentences. But in more formal publications, the thought of ending a sentence with a preposition used to give me the chills — simply because my teachers had hammered that rule into my head throughout elementary school.

But you know what sounds worse than "Bob has a lot to be happy about"? This: "Bob has a lot about which to be happy." Ugh. Although the revised version is technically correct, it sounds stiff, unnatural, and frankly, a bit excessive.

Ending a sentence with a preposition is not a grammatical error, so go with whichever sounds better.

This is another one that's been drilled into my brain since the early years in school. An infinitive is a verb in its most basic form: "to walk," "to see," "to eat," etc. To break an infinitive means to put a word or several words in between "to" and the verb itself — as in, "to automatically update an account." I have good news for you, folks: There's actually nothing grammatically incorrect about splitting infinitives. The only reason you wouldn't want to do this is if the resulting sentence didn't sound right.

If you struggle with remembering which is which, you're not alone. I have to look it up every time. Here's what's up: "i.e." means "that is" or "in other words," and "e.g." means "example given" or "for example."

This is a good one to know, especially if you're like me and use one or the other in your writing all the time. Both "–" and "—" are versions of the dash: "–" is the en dash, and "—" or "--" are both versions of the em dash. You can use either the en dash or the em dash to signify a break in a sentence or set off parenthetical statements.

Yes, it is a word. And it means "regardless." And someone even managed to write an entire article about it in the Huffington Post.

But even though it technically is a word, you may not want to use it. Some people still frown upon it -- and may frown upon you for including it in your content.

Here's what R.W. Burchfield has to say about starting sentences with a conjunction: "There is a persistent belief that it is improper to begin a sentence with And, but this prohibition has been cheerfully ignored by standard authors from Anglo-Saxon times onwards. An initial And is a useful aid to writers as the narrative continues."

Often, the choice is stylistic. If the sentence reads better starting with a conjunction, keep it. If it would function just as well without the conjunction, or if you can connect it to the previous sentence without compromising readability, then rethink it.

Which other grammar myths can you debunk? Share with us in the comments below!