The Greatest Marketing Growth Hack of All Time (Hint: Cupcakes)

A few years ago my team at RJMetrics was launching a short survey over the holidays. It’s a tough time of the year to get attention, especially when you’re a B2B SaaS company. At some point, someone suggested a cupcake giveaway. 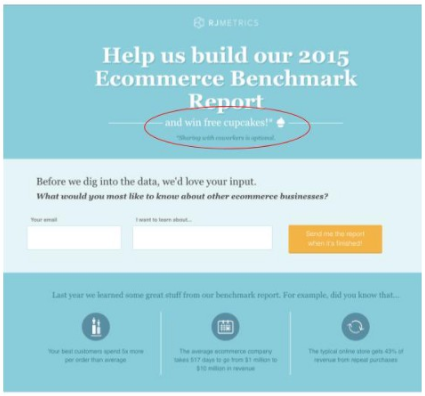 Ten participants were randomly chosen to receive a dozen cupcakes, and people LOVED it.

The response to the cupcake campaign was completely out of proportion to the $50 cost to us.

So we decided to make cupcakes a bigger part of some other marketing initiatives. Prior to this first cupcake encounter, we would use iPads as an incentive to promote our webinars. You know, that post-registration page that says “Tell your friends you’re joining us for a chance to win!” We decided to scrap the iPad in lieu of cupcakes…and our conversion rate skyrocketed.

People would rather receive a dozen cupcakes than an iPad.

And inevitably we would ship the cupcakes and see a cupcake photo plus a tweet like: “RJMetrics has the best webinars, and you might win cupcakes!”

So there it is, the greatest marketing growth hack of all time. The next time you’re trying to motivate people to do something for you, offer the chance to win some cupcakes.

The Psychology of Cupcakes

Now, let’s talk a little bit about what’s happening here. There are a few good theories. I first shared a version of this post over on ThinkGrowth.org and the responses there aligned pretty closely to what I hear whenever I share this story.

In the case of the survey, the odds of winning cupcakes were actually better than the odds of winning an iPad -- we were choosing 10 winners instead of 1. But for webinars, the odds were exactly the same -- only 1 winner. Still, there’s something about a dozen cupcakes that just seems more possible.

One commenter summed it up perfectly:

As in Lake Wobegon of Prairie Home Companion. This theory was presented by HubSpot’s co-founder and CTO, Dharmesh Shah and is a variation on cupcakes seeming more achievable, but with a little more detail on the psychology of why they feel more achievable: 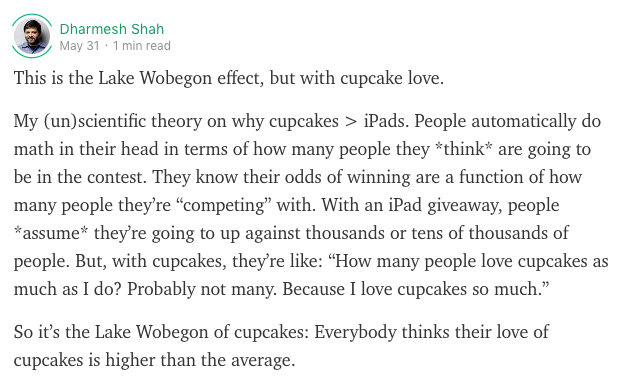 But winning cupcakes? That’s a community experience. You can gather your co-workers around to share in your success, eat cupcakes together, take a picture. And maybe on some sub-conscious level we all just want that feeling of community more than we want an iPad.

My hunch is that if you ask someone outright, they will always tell you they would prefer to win an iPad, but actual behavior reveals we might want something a little more meaningful.

The Element of Surprise

This is a less popular theory, but personally, I think it carries a lot of weight. In marketing, all strategies erode over time. Andrew Chen calls this “The Law of Shitty Click-Throughs.” He uses the example of the internet’s first banner ad:

And we see this play out again and again in marketing. As more businesses adopt a tactic, the better people become at tuning it out, and the effectiveness of that tactic wears off:

We’re just not used to seeing cupcakes show up in marketing. It surprises us, forces us to pause and pay attention. And attention, after all, is what marketers are always chasing.

If the surprise theory is true, this holds implications beyond cupcakes. It means there’s an enormous edge given to marketers who can navigate the balance of being familiar enough that people feel comfortable, but surprising enough that people actually pay attention.

I’ve recently fallen in love with CBInsights newsletter. The author of the newsletter and founder of the company, Anand Sanwal, has an amazing sense of humor and I’ve found myself hooked on his storylines. Here’s one of this latest newsletters: 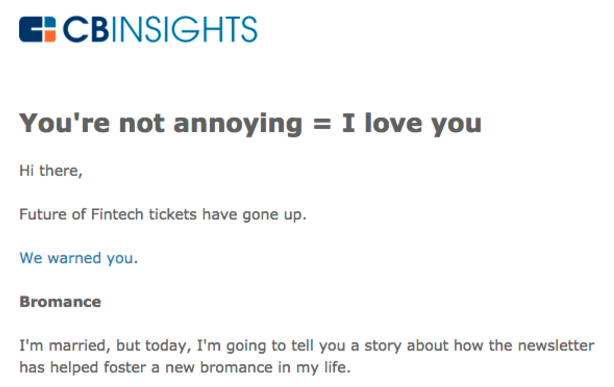 How many business communications lead with “I love you”? Or talk about bromances in a way that makes you want to keep reading?

And you actually want to read the copy because Anand is constantly dropping little remarks like “a not very useful graph” that are so refreshingly honest about the things marketers are often trying to hype. I mean this graph is interesting, but he’s right, it’s not very useful 😂 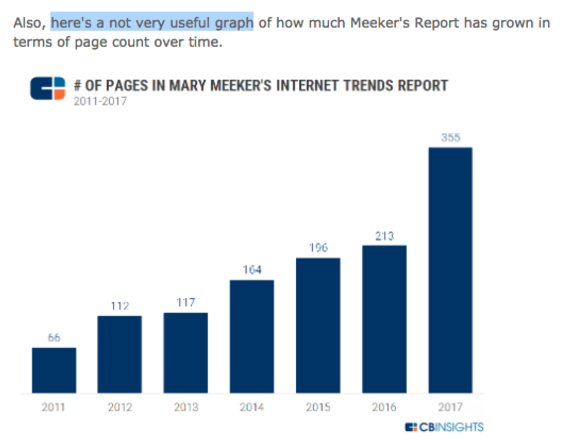 And of course, this is all held together by a core of content that is top-notch commentary on the tech industry.

Why do I love this newsletter so much? Yes, it’s providing incredibly useful information, but I’m constantly surprised and delighted by what Anand is writing. I read what he’s writing because it’s different from how everyone talks about similar things.

He’s not giving away cupcakes, but there’s still power in the art of surprise.

After I published this post on ThinkGrowth.org I heard from two marketers who were already implementing the cupcake test. So, the time to try this strategy is now. It won’t be crazy effective for too long!

But seriously, cupcakes or no cupcakes, keep your eye out for opportunities to share a little joy with your audience. We’re all busy and distracted and overloaded with information. Ask yourself how you can add just a little more humanity to your marketing, how you can create moments for your audience to connect with other humans, how you can make them pause and maybe ... just maybe ... how you can even make them smile.

Editor's Note: This post was adapted for the Marketing Blog from ThinkGrowth.org, HubSpot's Medium publication. You can check out the original version here.