The 50/50 Experiment: A New Approach to Growth Hacking 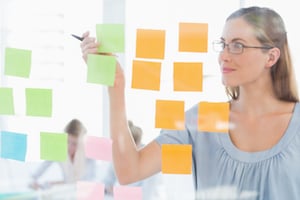 "What’s the next big idea?"

This phrase is all you hear inside the halls of every advertising and marketing agency. Every brand expects this sort of revelatory thinking of their agencies; and in turn, every agency urges their creative teams to “think outside the box” and come up with that over-the-top, albeit strategic, game-changing idea.

And yet, in our search for these cutting-edge concepts, we somehow manage to toss out the bulk of the ideas we come up with simply because they’re too small, too modest, or too unrefined. And we fail to recognize that those small, modest, and unrefined ideas might lead to the bigger ones.

Why Thinking Small Is Okay

Think about it: Nothing truly momentous was ever constructed in a single pass. The best of the big were built from hundreds of thoughts and seeds of random, smaller ideas that underwent countless cracks at the bat.

In advertising, those big ideas your team comes up with often never get buy-in from the client. If they somehow do, these ideas fail to deliver on objectives and substantive messaging. That’s problem number one.

The second problem, and arguably the most challenging one, is finding the time to come up with these revolutionary concepts. With all the emails, meetings, and distractions filling our headspace each day, I’ve personally found it to be nearly impossible at times to actually stop and think.

So one day I stopped. And I thought. Only then did I arrive at the following realization: Mountains can be moved if you stop trying to always think big, and instead, start thinking small. This may sound counterintuitive, but think about it: We can all make time for small.

A few months back, when faced with the challenge of devising ways to sell a tech-connected product for golfers, I conducted an experiment. The experiment was a dynamic method of ideation that requires a person to allot 50 uninterrupted minutes toward generating 50 different ideas.

Instead of focusing on the quality or strategic foundation of the ideas, I strived for quantity. I squeezed my creative sponge as tight as possible to wring out as many ideas on paper as possible. There are no rules and no regulations -- just ideas. And lots of them.

The goal? To end up with a list where at least one out of 50 ideas could be tweaked to drive the goals. Once you eliminate logistical factors like budget and business constraints, you’ll find that inspiration seems to flow far more freely. That was certainly the case for me.

Following my 50-minute blitz, I spent another ten minutes selecting what I thought were the ten best ideas. Two bubbled up to the top as solid, actionable, and within budget. They read something like this:

That same day, my team and I pitched the ideas, demonstrated how they’d move the needle, put them in place, and started selling more products within 24 hours.

Here’s what I learned in this experiment.

Nothing gets the creative mind working faster than a dose of pressure, and 50 ideas in 50 minutes is pressure. And since pressure induces adrenaline, cortisol, and norepinephrine -- the trifecta of fight or flight -- it definitely jumpstarts your every thought.

Remember: When the creative juices aren’t flowing, it’s okay to give the proverbial sponge a squeeze. Setting parameters or hard-line limits around your ideation processes can actually facilitate inventive thought.

Through this rapid ideation process, it’s important to take all your ideas to your extended team to further build on them and cut out the ones you can’t validate with empirical data or past learnings to keep them moving. It’s quick, turnkey, and inspired by the many core tenants of growth hacking. Think, fail fast, and iterate; track, test, and measure.

When you commit to coming up with ideas quickly in a tight timeframe, with 100% focus and no creative handcuffing, you end up with a vast pool of ideas you can build upon. This method also eliminates the roadblocks you often hit when brainstorming with a large group of people. (This is when the “vocal few” rule kicks in, allowing half the room to sit silently while a limited scope of opinions take over.)

Following my success with the 50/50 experiment, I set out to build a playbook of assorted games designed to codify ideation processes both individually and as a team. One of my favorite resources I often refer back to is a book called Gamestorming. Self-described to as a playbook for innovators, it has a series of modifiable activities it refers to as “games” for problem-solving, stakeholder identification, and ideation.

In this super-sized world we live in, sometimes bite-sized isn’t bad. Allowing yourself brief bursts of inspiration can make all the difference between run-of-the-mill concepts and the next great idea.

What methods help you clear the clutter and generate new ideas?