When I'm walking around the city and I have to cross the street, I do this thing where I start looking both ways before I've reached the intersection. If there are no cars coming at that moment, I like to run across the street immediately instead of waiting to reach the intersection -- otherwise a bunch of cars will probably be there by the time I get to the crossing signal.

Some people call that jaywalking. Law enforcement, for instance.

I call it efficiency.

The same can be said for a method of blogging my team has adopted: the crowdsourced Google Docs post. It's an efficient way to curate the contents of a list post, drawing on the knowledge of many to fill in the knowledge gaps of the one.

Check out how it works -- it's quite simple -- and try it with your team. You'll shave off a significant portion of research time that goes into curation (more time than my jaywalking frees up), and make the process of writing list posts far more efficient.

Step 1: Figure out what you want to write about.

First, figure out the post you want to write -- something that's conducive to a group brainstorm. Usually these are list posts with an angle everyone can contribute to from their own experience.

For example, "X Shows You Should Be Watching on Netflix" would be a good post to brainstorm with my coworkers because I know a lot of them like to binge-watch Netflix shows, and they could contribute good ideas to the Doc that I wouldn't have thought of. What's not a great post for that group is "X Ways to Wean Yourself Off a Netflix Addiction" because, well, I don't think any of us could profess experience to that.

Step 2: Set up your Google Doc.

Next, set up your Google Doc so it's ready for people to brainstorm and plop down ideas. Keep it simple -- providing just a couple informal columns to fill out will yield a wider breadth of results than several columns with very specific requests. The latter setup tends to seem daunting, and an incredible level of specificity makes ideas that fit the bill harder to conjure. 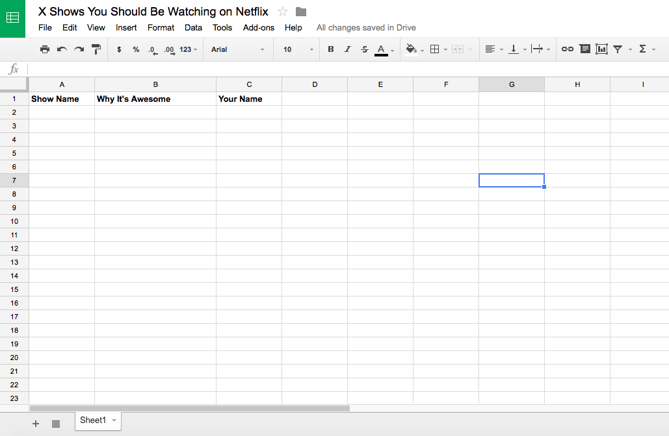 Step 3: Invite a bunch of people to it.

Once your document is set up, get the invites out. The more people you invite, the better -- more points of view will make your curated list cover more manner of sin. Just go to the blue "Share" button in the top-right corner of your Google Doc, and put in the email addresses of people you want to include in your brainstorm. It's also useful to include some context in the message box so people know why they're receiving an invite and what they need to do. 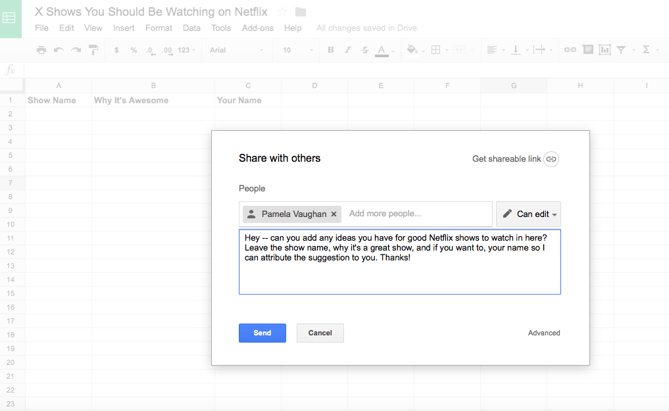 Step 4: Get the ball rolling.

Now, get started. Some people will jump in with ideas immediately, others may ponder for a bit. It helps to get the ball rolling by adding ideas in yourself -- the more items you add to the brainstorm Doc, the more it'll spur new ideas for other people.

While you're brainstorming, don't worry about crafting your sentences perfectly, making spelling and grammar errors, or even adding duplicate ideas. Whoever writes the piece will edit for all these things later. Just think of this time as a brain dump.

Step 5: Curate the best ideas from the Google Doc.

After everyone seems to have exhausted their ideas and people start to leave the Google Doc, you should be left with a big collection of ides. Now it's time to edit down your list. Delete the duplicate ideas, combine ideas that are dancing around the same themes, and come up with a list of the best stuff for your blog post.

And voila, you've found a way to crowdsource curation and minimize your overall blog-writing time.