How to Make the Most Money in Your Marketing Career

To Make Money in Marketing, focus on:

If I were to ask you to define a successful career, there’s a 46% chance you’d cite “money” as the measuring stick. Yet despite the emphasis placed on income, marketers are going about maximizing earnings in a flawed manner.

I’ve managed marketers for the past decade, and most see career growth as “incrementally hierarchal” -- progress unfolds linearly as the person climbs from one level of seniority to the next. 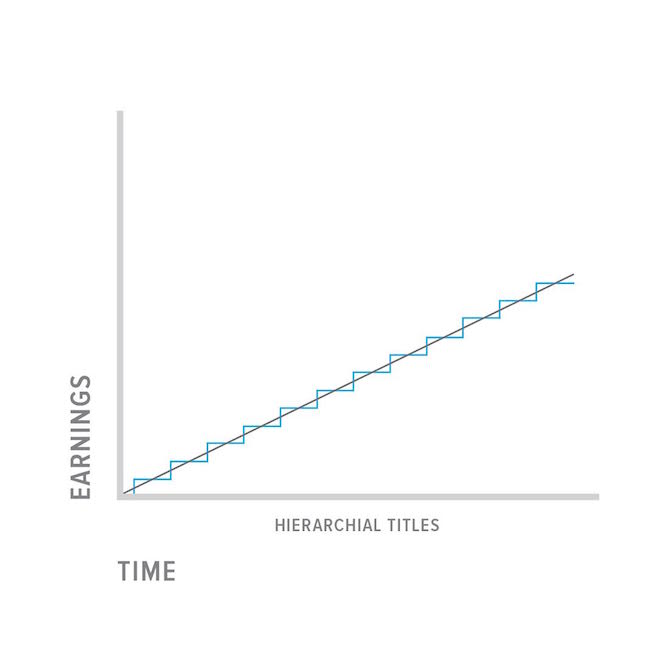 This approach would be optimal if income growth was linear and levels were limitless. But they’re not. Executive compensation, because it’s often laced with equity, triggers, incentives, and safeguards, tends to be exponentially greater than staff compensation.

So rather than aiming to maximize the size of the “riser” between each step, financially motivated marketers should instead optimize for crossing the executive threshold as early in their careers as possible (represented by the green arrow in the graphic below). 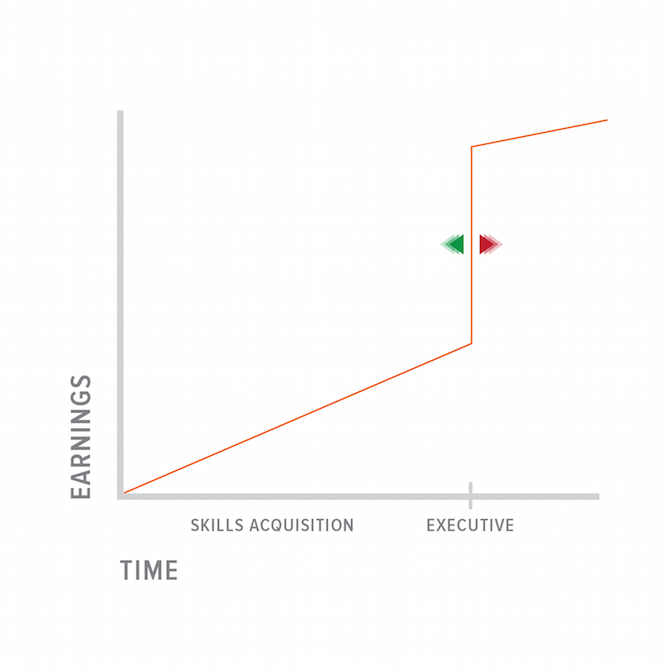 Here's how these two growth models can pan out in reality.

Let’s model two hypothetical career paths --- the “Hierarchal” (linear) marketer or the “Skills-Based” (non-linear) marketer -- to which one generates more lifetime income. For each scenario, we’ll assume a 40-year career in which the marketer earns $30,000 in year one.

Because those who take a Hierarchal approach optimize for annual title and salary adjustments, let’s imagine they grow considerably faster than the average worker. We’ll aggressively assume their compensation increases by 5% annually (about 60% higher than the 2.9% average). This marketer would earn a little over $200,000 in the final year of his career (30000*1.05^39), and amass a total of $3.6 million in income over that time. While both totals are impressive, given how the model works, the marketer’s income skews heavily toward the end of his career (25% of the total is earned in the final five years). And as we all know, it's very difficult to plan 40 years out.

Now let’s consider the Skills-Based career. Because these marketers optimize for time-to-executive achievement, lateral movement marks the front-end of their careers. In other words, they focus less on graduating from one level to the next (e.g., junior designer to designer to senior designer to creative director) and more on moving laterally throughout the department (e.g., designer, interactive designer, content strategist, customer acquisition manager) to acquire the skills required to eventually take the reigns of the full line of business.

Given this dynamic, we’ll imagine the first half of the Skills-Based career is spent with a slower growing compensation -- say at the average rate of 2.9%. Given that they’ve acquired diverse skills, we will also assume they become an executive at the mid-point of their career. After 20 years, the Skills-Based marketer would be earning about $52,000 (30000*1.029^19), a figure we’ll use as the average marketer's salary.

While it’s been well documented that CEOs earn 350 times more than the average worker, we’re only discussing marketing, so let’s conservatively estimate a CMO's total earning power to be 5x the average staffer or, in this case, $260,000. Figuring the executive’s compensation grows at least at the rate of the person in our first scenario, the marketer who optimized for executive status would earn $657,000 (260,000*1.05^19) in the final year of her career, bringing her aggregate earnings to a whopping $9.4 million -- 260% more than the worker in the Hierarchal example.

Obviously these aren't perfect scenarios. There are plenty of additional ways a marketer can increase income -- education (an MBA from a top program can change the timeline considerably), industry (technology startups may present a more collapsed timeframe), and job-hopping (changing companies is often a way to boost income) are three obvious ones. And the hypotheticals contain some major assumptions, like assuming the company always performs well (since executive salary is steeped in performance-based bonuses, a mediocre organization isn’t likely to produce consistently high income potential), and the unrealistic one-year leap from average salary to executive compensation in the Skills-Based example.

So don’t take the actual dollars as law. Rather, consider the relative impact that crossing the executive threshold relatively early in your career can have on your total earnings potential.

Of course, the larger question isn’t whether or not becoming an executive earlier in your career helps maximize income potential, but rather how to go about putting oneself on an executive track. The most direct path is to join a company that offers a "rotational program," or an operationalized system in which new hires are exposed to multiple parts of the business for finite periods of time, thereby creating a solid foundation for future leadership.

Yet if you are deeper into your career, or you work for a company that doesn't offer a rotational program, the key is to remain steadfast in the mission. As the graphic below illustrates, there may be a period during which you “fall behind” your peers who are “climbing the ladder," and it might seem like it's a good idea to abandon your track. But remember that you are running a different playbook with a delayed payoff. 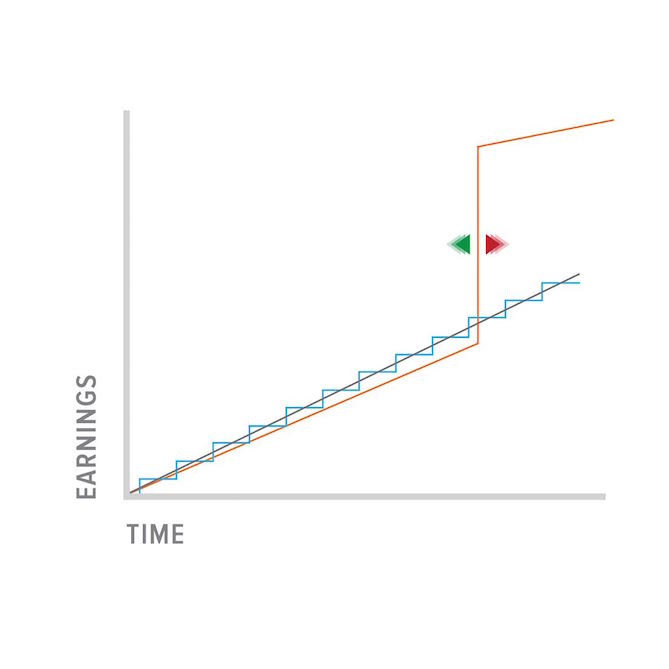 Beyond that, the next steps all center on your personal goals, positioning, and priorities. The following are a few important ways those will differ when you're taking the Skills-Based track compared to the Hierarchal track:

This contrast is self-evident, but the Hierarchical marketers endeavors to increase the frequency of promotions and the raise associated with each. That’s the very definition of hierarchy.

Skills-Based marketers aim to move the executive horizon line closer to the present, considering today’s work to be preparation for tomorrow’s leadership.

In the conventional Hierarchical model, employees measure progress by “qualitative adjectives” in their title. Shedding a “junior” is good; adding a “senior” is better. That the noun doesn’t change -- either term could modify “marketing manager” -- is immaterial. What matters is that the modifier connotes seniority.

Skills-Based marketers, on the other hand, place a high value on “classifying adjectives” in their title -- that is, descriptive terms that don’t necessarily suggest superlative qualities (“Social media” marketer vs. “Inbound” marketer, for example).

Hierarchal marketers emphasize personal performance, which is understandable given that it’s the individual’s achievement that allows management to make comparative decisions regarding seniority. The more achievements the marketer unlocks, the higher the title.

Yet if you are building a foundation for executive leadership, the way you would characterize your impact naturally shifts from highlighting individual skill mastery to emphasizing your impact on the business’ performance. Executives aren’t measured on what they do, per se, but the results they generate -- and aspiring executives should follow suit.

Perhaps the biggest difference between the two schools of thought is the nature of each marketer’s expertise. Climbing up one path of the corporate ladder works best when the person excels at a narrowly defined function. A public relations manager deepens relationships with an increasing number of journalists, thereby progressing from PR coordinator to PR manager to PR director to VP of communications. But none of these levels, not even the coveted VP of communications title, is an executive role. It’s simply another rung on the same ladder.

On the other hand, a marketer who rotates through the department may work in public relations long enough to develop a reasonable understanding of the role -- before moving on to experience an adjacent function. If the first marketer is “narrow and deep,” then the executive-track marketer’s expertise could be characterized as “broad and diverse.”

None of this is to suggest that either model is “better” than the other. One is focused on climbing steadily through the subject matter expertise, whereas the other maintains a much wider perspective. This isn’t even to say that money is the best measure of success. There are many valid definitions of success, ranging from contributing to the betterment of the world, to fulfilling a passion, to the most popular measure -- achieving that elusive work-life balance.

This post simply suggests that for those who correlate money with success, then the best way to achieve the goal is grab a seat at the executive table as early in your career as possible. And developing the most varied set of marketing skills is the most reliable way to occupy that plush seat.