How to Write Absolutely Addictive Articles 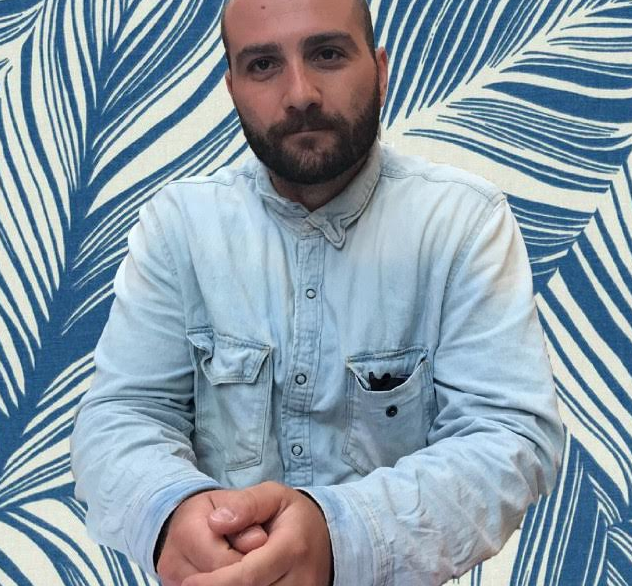 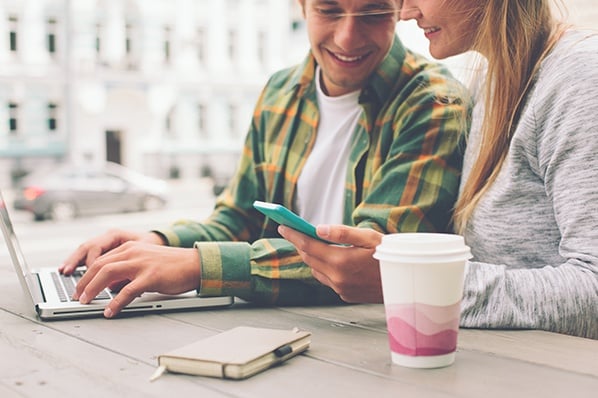 This is a longer article.

If you’re feeling noncommittal at the moment, don’t read it. Save it. Bookmark this page for later, when you have more time.

You’ll be glad you did, especially if your goal is to write articles of your own. Articles that lure readers in slowly, carefully, inching them down the page, sentence by sentence, until the words run out. Articles people can’t stop reading.

Joe Sugarman wrote articles like this. In fact, he was behind some of the most addictive and profitable articles ever created. Except he called them “print ads.”

In 1986, Joe Sugarman, a direct response copywriter, wrote a print ad for BluBlocker Sunglasses. The ad helped an iconic brand take root. It also made him rich: 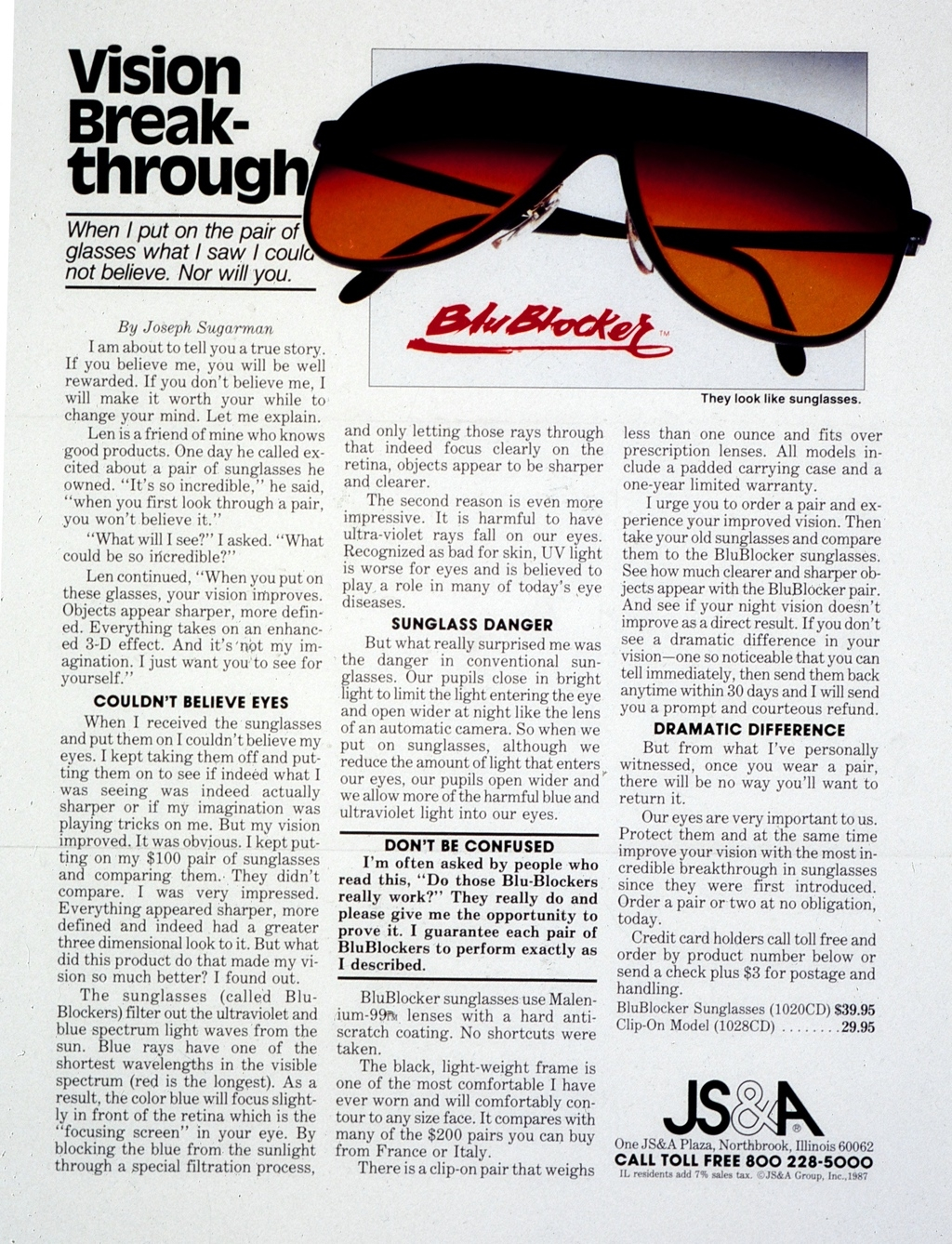 He distributed his ad the old-fashioned way, in the mail, asking readers to call in with their credit cards. The response was enormous. The glasses sold out in a day. And he did this again and again with an assortment of products: calculators and speakers, smoke detectors and thermostats, even jets and mansions.

His success stemmed from his ability to keep people reading.

Sugarman knew that prospects who finished an ad were far more likely to buy the product than those who only read the beginning. So he used every engagement tactic he knew to keep people glued to the page, addicted.

How to Write Addictive Articles

Towards the end of his career, Sugarman started divulging his copywriting secrets in expensive seminars. To communicate his vast knowledge, he organized it into axioms.

Some of his axioms are philosophical truths, intended to help business owners arrive at a unique selling angle:

Others are more practical tips, intended to help copywriters keep readers engaged throughout the entire ad. I've transcribed these engagement tips below, along with some context that’ll help you apply Sugarman’s proven wisdom to your next article.

1) “The sole purpose of the first sentence in an advertisement is to get you to read the second sentence.”

The Law of Inertia also applies to copy. Conventional wisdom says that the more time you spend reading something, anything, the more likely you are to finish it. An engaged reader is like a train, hard to stop.

But trains are also slow to start, meaning the copy has to create a big upfront push.

Your first sentence is your article’s most important. If it fails to engage the reader, then you’ve lost everything that matters.

How to Craft Your First Sentence

Your article’s first sentence doesn’t need to have anything to do with the topic. It only needs to capture attention, like a gunshot. To do so, make your opening sentence:

2) “Every communication should be a personal one, from the writer to the recipient, regardless of the medium used.”

Why should something written for the masses read like a personal message? Because people crave connection. It’s a basic human need, even in writing. Readers want to feel like they know the person behind the words.

Personal copy tears down barriers, giving an individual reader the impression that the article was written solely for her consumption, her benefit, which is engaging on its face.

TAKEAWAY: Addictive articles sound conversational, like an email from a friend.

How to Write Conversationally

Also, when writing an article, don’t visualize your audience as a nondescript crowd of people. Instead, when you write, imagine a single person in that crowd, your Ideal Reader. Give her a name, an age, and an occupation. Give her eyes, a nose, and hair. Maybe she looks like someone you know and care about? Imagine her face as she reads your work.

Now write to her. She is the crowd.

As the saying goes, Never write for anyone, always write for someone.

3) “Get the reader to say yes and harmonize with your accurate and truthful statements while reading your copy.”

As a teenager, I sold magazine subscriptions door-to-door. At first it was hard and I was unsuccessful. Then I picked up a trick. I started getting the prospect to agree with me:

“Have one in the house?”

“Did you, by chance, buy it off the shelf, individually?”

“I did, actually,” said the prospect.

“I bet it cost about six bucks, right?”

“Well I can sell you TWELVE issues of the same magazine for less than twenty bucks,” I said. “If you sign right now, I’ll throw in a free tote bag so you can bring all your magazines to the beach.” Then I’d smile.

Sure, lots of people still declined: “No thanks, kid.”

But lots of people also smiled back and took my pen: “Hell, why not? If I don’t I’ll end up spending full price on the next issue!”

How to Keep Readers Harmonized with Your Message

People nod at statements they perceive to be:

That said, the better you understand your Ideal Reader, the easier it is to harmonize her with honest, interesting, or informative copy. So do your research. Know your audience like you know yourself.

4) “Keep the copy interesting and the reader interested through the power of curiosity.”

Most copy goes through ebbs and flows of engagement. Some parts you can’t read fast enough while others slow you down to a crawl. This is normal. Even so, it’s why so many people abandon what they’re reading. The thrill dissipates and they get bored.

Boredom kills copy. But that's OK because there's an antidote: curiosity. The trick is knowing how to plant it …

How to Plant These Seeds

“One way to increase readership is by applying a theory I call ‘seeds of curiosity,’” writes Sugarman. “It goes like this. At the end of a paragraph, I will often put a very short sentence that offers some reason for the reader to read the next paragraph.”

These phrases nudge the reader forward, subconsciously, through the sludge. It’s a neat trick, but nothing drives engagement like this next concept …

5) “The ideas presented in your copy should flow in a logical fashion, anticipating your prospect’s questions and answering them as if the questions were asked face-to-face.”

While direct response copywriters can sell many people at once, they can’t always be there to answer questions. When you’re face-to-face or on the phone, you can field questions as they come up. That’s an advantage salespeople have over copywriters.

TAKEAWAY: Addictive articles stay a step ahead of the audience.

How to Anticipate What Your Readers are Thinking

This process breaks down into two steps:

Let’s use this article as an example:

Sound familiar? This process will help you develop your article’s outline, too.

6) “In the editing process, you refine your copy to express exactly what you want to express with the fewest words.”

I spent a long time editing this piece. In fact, you wouldn’t believe how much time I invested in its post-production. But I did, in part because I like the work. I like tinkering with the words, cutting and shifting them, experimenting until the language clicks. I get lost in it, but I digress.

The real value of editing is evident in the final product: a clear, concise, and hopefully, addictive article for the reader.

“This axiom holds one of the most valuable secrets to effective and persuasive copy,” writes Sugarman, “for it is in the editing process that you turn that raw emotional outpouring of thoughts and ideas into a polished, harmonious, resonant tuning fork that will vibrate perfectly with your prospect.”

How to Trim the Fat

Here’s a quick blurb about the benefits of shorter copy:

The truth is that in copywriting, less is more. Why? Think of it this way: copy with fewer words will get read more because the length is less intimidating to readers. It also enables readers to finish the copy much faster.

In copywriting, less is more. Not only is shorter copy less intimidating, but readers will finish it faster, too.

Same message, half the words. Here’s how I did it:

Now imagine if you halved the word count of an entire article: same message, delivered twice as fast. Now that’s valuable to both the reader and the author.

“Your reader should be so compelled to read your copy,” writes Sugarman, “that they cannot stop reading until they read all of it as if sliding down a slippery slide.”

If you read this article, you already know how to achieve this.

7 Scientifically Proven Ways to Get More Clicks on Your Content

How to Write Copy People Notice, Read, and Trust: Lessons from "The World’s Best Copywriter"