How to Use Humor to Sell More [Free Email Templates]

Sales can be a stressful job. Some months are good; others are tough.

When things aren't going your way, you're constantly feeling the weight of quota pressure. Accounts that once looked like a sure thing are getting close to the “gone dark” or “unresponsive” label, in which case they might be passed to a new rep. The same old boring follow up isn’t working. What can you do?

Here's an idea -- how about mixing some humor into your sales process? Sometimes a smile can be enough to elicit a response -- and keep you sane.

However, before you start throwing humor and GIFs into everything you do, you might want to do some research on the individual you’re dealing with. Some people just don't like a comedic approach.

To get a heat check on your prospect, go on their social channels and see what sort of content they’re responding to and how they’re responding to it. You might see they recently checked into a bar to watch the Super Bowl or posted some photos/videos on Twitter that suggest they can handle the funny. I like to use Twitter and LinkedIn to understand what tone I should use to approach someone.

But don't be overly cautious. For the most part, if a prospect is just not answering you no matter what you do, sending a funny message is a great last-ditch effort.

I’m a big fan of adding funny GIFs, videos, or images to follow-up emails. One time when securing sponsorships for a charity event, I received a “no” from a company I thought was a perfect fit. I knew my recipient fairly well since we had spoken in the past, so I went for it. Since I were raising money for Muttville, I sent over the following email: 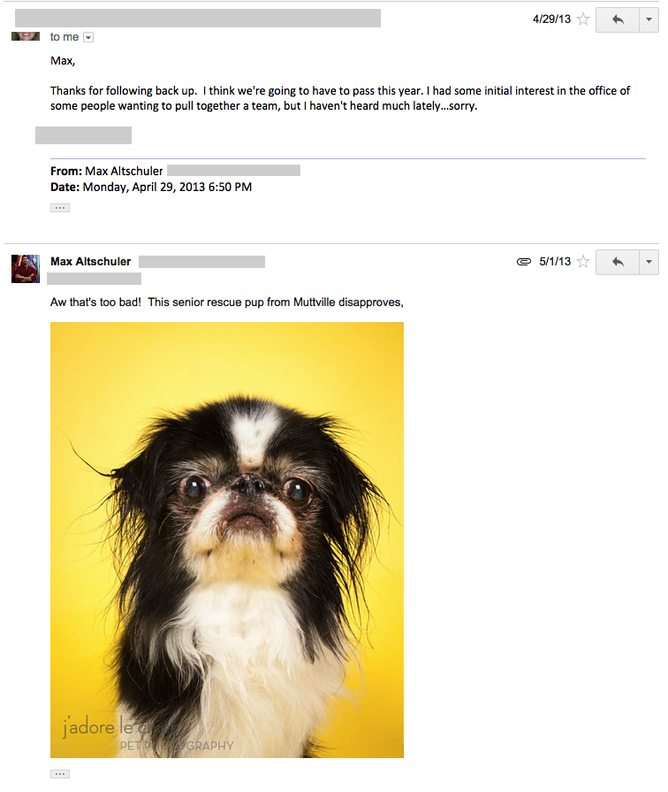 It was exactly what was needed to get the company to give it more serious thought. The recipient liked it so much that she even showed the email to her four-year-old daughter. Although we didn’t get a sponsorship from them until the following year, the interaction strengthened our relationship and made my organization stand out.

At the time, I thought this approach was a reach. Now I’m not afraid to flex it.

Recently, a lot of sales reps have been using the “chased by a hippo” or “frozen alligator” email as their last follow-up or breakup email. These emails say something along the lines of:

I tried to contact you regarding [value proposition] and haven’t heard back. Let me know if:

Don't worry -- I haven't heard of anyone having to call Animal Control (yet).

Another thing that works well if you can pull it off well is a custom video, like this one from FunnyBizz:

These sorts of videos are really easy to put together now that most phones, tablets, and laptops have embedded cameras. It just takes a little extra time and energy.

Bear in mind that many of these plays also work in the onboarding process. It there’s a customer support error or something that slipped through the cracks, you can lighten the mood with a funny image or line in your response.

I’m not an easily offended person, but you never know what can set someone off. A sales executive at a large tech company recently told me that she went off on a sales rep because he made a joke about her alma mater’s football team. Now that’s a bit extreme, but it proves the point that you need to do your homework first. You’ll also need to make sure you aren’t saying anything that can be misconstrued as racist, sexist, ageist, etc. If humor crosses the line into insensitivity, it could backfire in a big way.

Lastly, try not to overuse humor in the sales process. Like anything, it becomes annoying or off-putting at a certain point.

The Benefits of Humor

More humor in business is sorely needed. Everyone would like to smile more at work, and smiling for just a few seconds is proven to enhance one’s mood. And wouldn't you rather deal with someone in a good mood?

Plus, using humor in sales gets results. A joke is a great way to get a prospect to lower their guard, and in a sea of blah emails, yours is sure to stand out. It also provides you a way to showcase your creativity and demonstrate to the prospect that you're making extra effort.

Sales might be a stressful job, but that doesn't mean you can't have fun with it. Bring the funny to your prospects, and they'll show you the money.

You can discover more hacks, tips, and tactics on the entire sales process in my new book Hacking Sales: The Playbook for Building a High Velocity Sales Machine. Check it out on Amazon.