According to DMR Stats, SlideShare users add more than 400,000 new presentations per month. The site receives 159 million page views per month, and has more than 70 million users.

And it’s one of the most underutilized lead generation tools we marketers have in our quiver.

Sure, it has a paid lead capture form, but even without it, organic calls-to-action (CTA) work beautifully. Plus, with the embed feature, you presentations are highly portable and easily placed in blog posts, bylines, and on social media.

Out of the 30-plus decks I’ve posted, four of them have been featured on the SlideShare homepage. That helps drive a considerable amount of visibility and referral traffic. While I can’t tell you exactly how to get featured there, I do have a few ideas.

The icing on the cake, perhaps, is that incoming traffic from a CTA slide can convert at incredible rates -- much higher than any other social media platform. Here are some analytics from a new deck after just a few days live:

Here are the lessons learned in more detail:

Always end with a top to mid-funnel CTA slide.

As content marketers it is our duty to provide our content consumers with what to do next. If someone is going to take the time to read, watch or listen to our content we owe them the next step. As a result, it is absolutely prudent to include a top to mid-funnel CTA at the end of the presentation.

There’s a reason to put it at the end, too, but more on that shortly.

Also know that the lower the CTA is in the funnel, the less conversions you’re going to get. Having a CTA to sign up for a free demo will get far less action than offering up an ebook.

Examples of SlideShare CTAs that Actually Convert from Chad Pollitt

Above are examples of what CTA slides can look like. All but the last CTA are just JPGs so the buttons don’t work. You’ll want to make sure your buttons do. If you want more examples feel free to check out my SlideShare account. I’ve retired some of the really old stuff, but there are plenty of goodies still in there.

SlideShare referral traffic has more inherent trust in you.

How would I know this? Easy, look at the conversion rates below. These are Relevance.com conversion rates since November of 2012 for social media channels. Meaning – if someone clicked on any link to our website on social media this was the percentage of people that converted on a landing page.

Here’s the thing -- If someone is going to trudge through 30, 50, 100 slides and get to the end, they clearly liked the content and found it helpful. Otherwise, they would jump ship before the end, never see the CTA, and never become referral traffic. 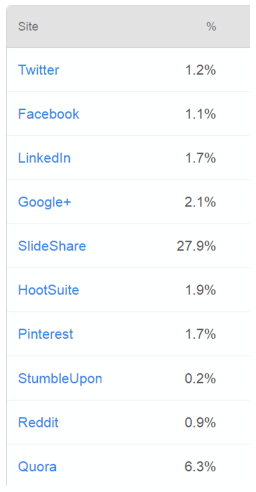 I’ve experimented with placing CTA slides in the middle of decks and they don’t perform nearly as well as the ones at the end. Besides, you want to give the content consumer a chance to get through the deck before they click away. They might not trust you enough to click through to your landing page yet, let alone fill out your form.

Slide embeds on bylines and guest posts on popular sites get a ton of views.

Below is a chart of all of the traffic sources to my presentations. Sometimes these presentations are from speaking appearances, but sometimes I’ll create one just for a post. There’s a reason why almost 75% of the traffic comes from embeds and referral sources. Anytime I get the chance to write for HuffPo, Guardian, Moz, Social Media Today, etc. I try to include an embed of a presentation. 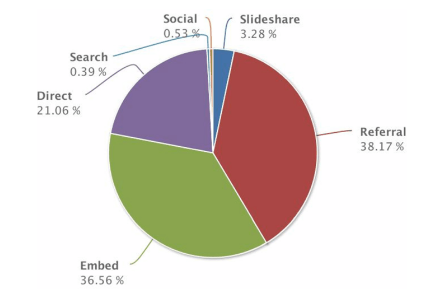 This serves three purposes -- more visibility, a baked-in CTA (many of the sites I write for don’t like overtly written CTAs, but have no issues with one in a deck), and the slide view count is a way to monitor how many people are reading the article.

With the embedded deck I can go back to SlideShare and get a rough estimate as to how many people read the article I wrote on Moz without having to ask them how many views it got. While Moz does indeed show 30 days of analytics via a link below the comments section, SlideShare gives a lifetime view count.

SlideShare will feature your deck on its homepage if it’s good. 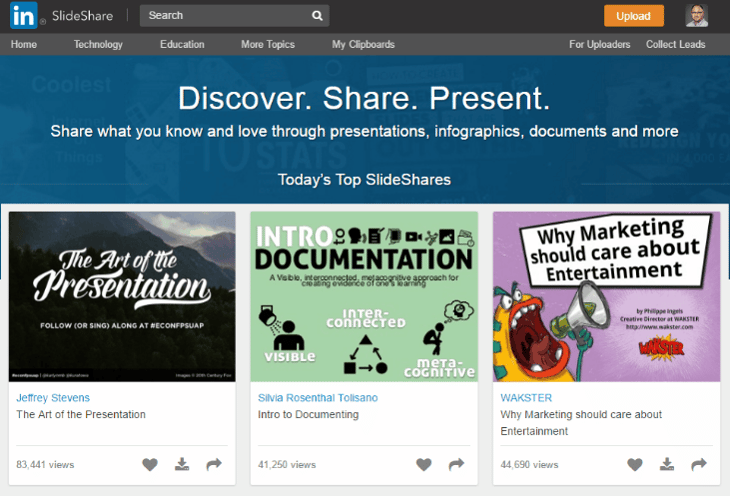 If you can get your deck embedded on a highly traveled website within 24 or 48 hours of uploading someone at SlideShare takes notice of its popularity. I believe it’s at this point they determine whether or not to feature it in a category or the homepage. This has held true with all of my decks that have been featured.

If SlideShare isn’t a channel you use to drive leads, I highly recommend you make it one. The numbers don’t lie -- it’s arguably the most efficient social media lead generation tool on the Internet. Making a presentation can be a lot of work, but if you repurpose it well and get it out there it can sure be worth the effort.

Now let’s see what I can learn in the next quarter million views ...

Editor's Note: a version of this post first appeared on Inbound.org, HubSpot's community for inbound marketers.

A starter guide to converting website visitors into leads for your business.