Everything You Need to Know to Successfully Live-Tweet Your Event

Live-tweeting is kind of like note-taking, only it's online, collective, and interactive. When you hear a great quote from a speaker, or "tweetable takeaway" (as in, a key takeaway that can be abbreviated to less than 140 characters), all you have to do is type it up in a tweet and ship it out to the world. Your followers will see the tweet, and so will everyone following the event hashtag -- and people can retweet, favorite, or reply to you. 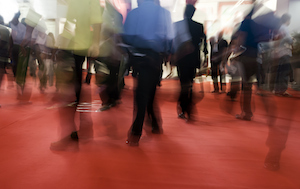 For attendees and organizers alike, live-tweeting has become a fixture at most conferences, events, webinars, and lectures. And to capitalize on it, many event organizers have figured out they need to assign a person or even a team of people to run social media at their events so it runs smoothly.

Are you thinking about live-tweeting and running social media for your company's event? Whether you've done it before or this is your very first time, these tips, tricks, and best practices will help you live-tweet like a pro.

1. Choose a hashtag and promote it.

Make your hashtag short and sweet so people have plenty of characters left to tweet takeaways and quotes -- think #USMNT instead of #USMensSoccer. It should also be intuitive and easy to remember -- think #SocialFresh instead of #SocFreshOrlando14. Make sure no one else is already using your hashtag, and be careful not to make any of the hashtag mistakes these big brands made. (To learn more about creating a hashtag for your event, check out this article.)

Your hashtag should be ready from the moment you begin promoting your event. Include it in every tweet, banner, image, email, and webpage about the event. You can even use it in your brand's Twitter and Facebook cover photos, or put it into your email signature.

Subscribe to #RoadToDF14 for a chance to win a FREE #df14 pass. Watch the premier on 7/8 at 11am PDT to see who wins:http://t.co/xOwWxaiRjz

2. Assign one person to be in charge of social media for the event.

Once your event finally gets going, a ton will be happening at once, and everybody on your team will be running around plugging holes. Expecting several people to straddle their main jobs with social media monitoring and publishing is not a strategic approach -- and it will lead to a heck of a lot of confusion. Instead, assign one person to be in charge of social media for the entire event.

Schedule tweets leading up to the event that include the official hashtag. These tweets can announce event speakers, remind people to register or buy a ticket (include a shortened link), and count down until the event begins. This will save you time and effort, and ensures you remember to keep tweeting regularly about the event as it nears. (For more tips, check out our article on how to bulk schedule tweets without sacrificing authenticity.)

Register before 6/27 for your chance to meet @GuyKawasaki at the #INBOUND14 Welcome Reception! http://t.co/Plf8F6W5Qk pic.twitter.com/wWALIreNO2

4. Create templates ahead of time.

If the event has speakers, make images of these speakers ahead of time. Optimize them for tweets (876 x 438 pixels) and leave some whitespace so you can add text later. In the example below, our social media manager Brittany Leaning created a countdown template for our INBOUND13 event and changed the numbers as we counted down.

During the event, when you're in the sessions, you can listen for sound bites, write up a quote in the image quickly, and tweet it. Aren't templates beautiful?

5. Write and schedule tweets that will go out during the event.

You can schedule tweets ahead of time that make it look like you're live-tweeting them during the event. For example, if you know exactly when a speaker's session starts, you could tweet something like, "[Speaker Handle] is going on in 5 minutes! Grab your seats! [event hashtag]."

If you don't know exactly what time some things are happening, you can still write tweets ahead of time and put them into a Google Doc. That way, you can grab it at a moment's notice. If you choose to do this, make sure you shorten any links and check the character count so you can literally copy, paste, and send.

The more you prepare tweets like this ahead of time, the less likely you'll be running around the event like a chicken with your head cut off -- just make sure you change your scheduled tweets in case your agenda changes at the last-minute.

6. Expect technical difficulties and have a back-up plan.

If your phone dies mid-tweet, what are you going to do? Make sure you're fully charged, carry your phone charger around with you, and keep a laptop handy as backup. If you're concerned about battery life and your ability to charge on the go, invest in a Mophie battery case.

7. Use the event's hashtag in every single live tweet.

8. Make yourself aware of unofficial hashtags.

Sometimes, people tweet using hashtags that make the most sense to them instead of bothering to look up the official hashtag -- even if your hashtag promotions are spot-on. For example, Salesforce.com made the official hashtag for their Dreamforce conference #DF13, but some people still tweeted using the hashtags #Dreamforce and #Dreamforce13 instead. Keep an eye on these rogue hashtag feeds so you can interact with those tweeters, too. Speaking of which ...

Keep track of the official hashtag as well as unofficial hashtags that may have popped up. You won't be able to see every single tweet, but look out for questions you can answer, positive comments you can respond to (or favorite, or retweet), and negative feedback you can address. (Click here for tips on responding to negative tweets.)

Monitoring all these tweets can get overwhelming, which is why it's not just about monitoring -- it's about monitoring the right conversations. You'll want to differentiate between the tweeters who are random people, and those who are your Twitter followers, event attendees, leads, and customers. If you're a HubSpot customer, you can do this easily in Social Inbox because each tweet is color-coded with the status of the person tweeting (whether they're a follower, lead, customer, or stranger). You can also set up feeds for registered attendees so you can give them special shoutouts.

I also recommend asking your Twitter audience questions to boost engagement and give you insight for your next conference -- things like "What's been your favorite session so far?" Try to keep the questions positive, but don't avoid addressing negative feedback if it comes your way.

Let your speakers know you're tweeting about them by including their Twitter handle when you promote their sessions or quote them.

"One of the reasons why Google has been so successful is b/c they view their products as works in progress." - @fivethirtyeight #INBOUND13

11. Get a good seat at speaker sessions.

If you're live-tweeting photos, make sure the photos are taken from a unique -- and a really good -- angle. This means you should arrive early at the sessions you want to tweet about. You want everyone to retweet YOUR photo, not someone else's.

12. Listen for sound bites to add to those template images.

Remember those template images of event speakers you created before the event? It's time to put those to good use. Have these templates on hand as you listen to the speakers. When you hear a tweetable takeaway from a speaker, type it up in the picture template, write a quick tweet to accompany it (including the speaker's Twitter handle and your event's official hashtag), check quickly for spelling errors, and ship that tweet as quickly as you can.

The first tweet that comes out with any given quote is often the most retweeted, so it's really important that you do this fast. Everyone else will be live-tweeting at the same time, and you want your tweets to come first.

Don't do this too much or you'll annoy your followers, but if you see anything that's particularly tweetworthy, get ready to snap a picture and upload it to Twitter. Try to get these photos in front of your brand's logo when it's natural and get the Twitter handles of the stars of your photos.

14. Compile the best tweets from the session.

When you're finally done live tweeting, you're going to feel a high. Use that adrenaline to write a follow-up blog post with all the best tweets from the session. Make sure the tweets feature a healthy mixture of your own and your attendees' tweets -- it's not great to hog the spotlight. Plus, included attendees might just tweet out the blog post since they're featured in it.

For step-by-step instructions for how to embed tweets into your blog posts, check out our guide to embedding social media posts on your website.

Chances are, people will still be tweeting about your event when it's over. They might have questions about where to find session recordings, or they might tweet feedback for how they think it went. Respond to these tweets, both positive and negative.

16. Assess engagement on each of your tweets.

Which of your tweets got the most favorites and retweets? Which links were clicked on the most? Were tweets with images more popular than tweets without images? Analyze which tweets performed best so you can make your next live-tweeting session even better.

What other live-tweeting tips do you have? Share in the comments below!