You might not know it by looking at me, but I am a bloodthirsty and ruthless killer.

That's right, dear reader. That grinning exterior belies the horror of a murderer, born between the years of 1980 and 2000 and hell-bent on destruction.

Millennials -- the enigmatic demographic marketers are desperately trying to decode and squeeze more money out of -- are wreaking havoc on the industry ecosystem. With our smartphones, our laziness, and our avocado toast, we cruelly dash the hopes of anything surviving our wrath.

Bar soap, beer, and the movies -- all dead at the hands of entitled recent college grads.

Have you ever enjoyed a glass of sparkling rosé on a rooftop patio, then saved the rest of the bottle for later by closing it with a wine cork? Tough cookies -- we're coming for wine corks faster than you can say, "Snapchat."

Nobody should really be surprised at the wrath of millennials. We're staring down the barrel of skyrocketing costs of living, crippling student loan debt, and the rising probability the world will go up in flames during our tenure as "grown-ups." All that stress has bubbled over and made us vengeful, killing machines -- and we're unstoppable.

In light of these dark and difficult conditions, I want to personally apologize for my generation -- and lighten the collective internet's mood with these 12 hilarious tweets about the various industries, foods, activities, and ideas my people have killed over the last couple of years.

Millennials are waiting longer to get married than their parents, and they've been accused of killing the sacred act. But some of us argue that we're not anti-marriage -- we're just waiting until we have our lives a little more together before settling down.

We're not gross -- millennials just aren't buying as many napkins because we're buying paper towels instead. Another one bites the dust.

I see articles about Millennials preferring paper towels over napkins, but no reports about me repping Gen X by wiping my hands on my pants.

Millennials aren't hitting the links as often as other demographic groups. Maybe they just don't like the great outdoors -- or maybe the cost to play is too high for our tight budgets. Nobody Tiger Woods.

Sure, millennials are killing off real estate, diamonds, golf, and napkins, but at least we've kept #slime alive! https://t.co/SToGRMKeHA

I haven't sampled the menu at Applebee's enough to say what it's most famous for. But evidently, it's not enough to impress the most discerning of millennials -- because they're steering clear of Applebee's and other fast-casual dining spots.

Me, a broke millennial: “LET’S GO GET DRUNK AT APPLEBEES”

When an Australian real estate tycoon suggested millennials could invest in real estate if they were stricter with their discretionary spending -- citing avocado toast as the main culprit -- we revolted on Twitter.

While it is true that fewer millennials are buying homes compared to renting them, avocado toast probably isn't the only reason why ...

Alright, I did the math. If I stopped eating avocado toast every day, I would be able to afford a bad house in Los Angeles in 642 years. pic.twitter.com/nqhiqnQ07E

"A diamond is forever" -- unless you're a millennial.

Any way you slice it, we're not buying, and people are confused as to why ...

I work at a grocery store

Millennials aren't shopping at department stores like Macy's and Sears as much as their forebearers -- instead electing to shop online or not shop at all.

love 2 be a millennial sitting on my giant hoard of cash, willfully refusing to buy:
- diamonds
- houses
- department store things

Everyone's cutting the cable cord these days -- led by millennials, who are opting to subscribe to streaming services like Netflix and Hulu in lieu of paying for traditional cable packages.

It comes as a surprise to some of us who remember being lectured about watching too much TV when we were younger ...

1997: Son there are better things to do than watch TV all day and cable is expensive
2017: How #millennials are killing the cable industry

Yogurt -- specifically light yogurt -- is next on the millennial chopping block. Instead, we're opting for Greek yogurt.

I don't identify with millennials but I'll dance on light yogurt's grave with them, that's for damn sure

Millennials aren't buying fabric softener -- and as it turns out, it's partly because we don't know exactly what it does.

me, sipping from a tall glass of fabric softener as I watch golf on the TV at Applebees: millennials really need to get their priorities straight

Millennials are choosing other banking and lending solutions other than the traditional brick-and-mortar institutions -- and some people aren't at all surprised. 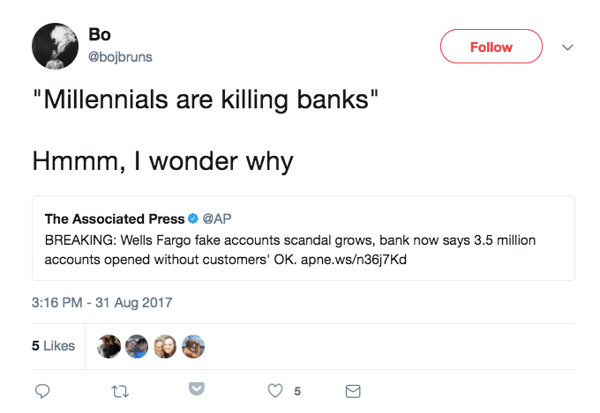 That's right -- millennials aren't cooking at home as much, so they're bypassing the grocery store in favor of meal kit delivery services and dining out.

need it to live. next question pic.twitter.com/PrkFHlhZ6U