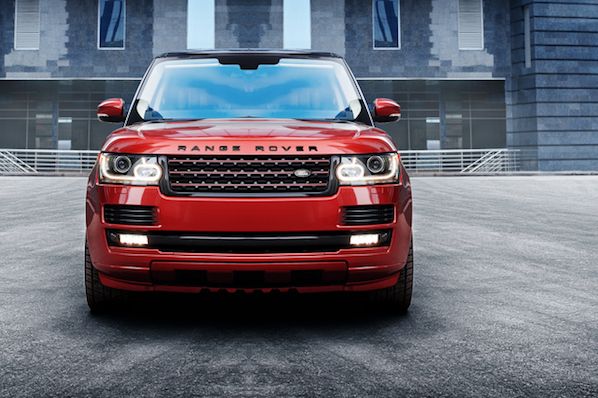 In 2012, the concept of native advertising broke onto the scene. Back then, who would have predicted the deep impact of native on the world of online advertising?

Native ads have since overtaken display ads as the most popular form of digital advertising. For marketers everywhere, native ads -- used on social, search, and content recommendation platforms -- have become a staple item on the online advertising menu.

There are so many amazing examples to choose from, so we've narrowed it down to nine exciting, advanced, and current native ads that we think do a great job:

1. Altran Engineering in the Financial Times

This native advertisement combines some of the best elements of digital advertising: video, a human interest story, and classy hi-tech with an Elon Musk connection.

Produced by the Altran engineering company, and published in the Industrial Tech section of the Financial Times, the above video, "Hyperloop: designing the future of transport?" tells the story of a group of students from the Technical University in Valencia, Spain who are competing in the 2018 Hyperloop Pod Competition run by Musk's SpaceX company.

This native video ad has a palpable human component -- the students and the Altran staff who are supporting them in the tough competition. This brings in its futuristic aspect -- the best and the brightest working to design the fastest transport pod that will transform the future of transportation. And it's presented as a news story, not as a promotion or ad for Altran or the SpaceX competition (although it's actually promoting both).

Together with high production value and a compelling narrative, it's a great example of a native video ad.

Land Rover uses diverse outstanding content marketing campaigns to promote its vehicles. These native content strategies are in full form in Land Rover's Dragon Challenge video, shown above. It's eye-catching, slick, and suspenseful. It's everything a native campaign can and should be.

This nail-biting ad shows the world's first attempt to scale the stairs leading to the Heaven's Gate landmark in China -- by vehicle. In February 2018, a specially fitted Range Rover SUV successfully drove up the 999 steps to Heaven's Gate, at a frightening angle of 45 degrees.

The native campaign perfectly captures the brand essence of Land Rover -- daring, excellence, adventure, and ultimately, success. Promoted via social Land Rover's networks, it's much more than an ad. It's a record-breaking event and a story of its own. 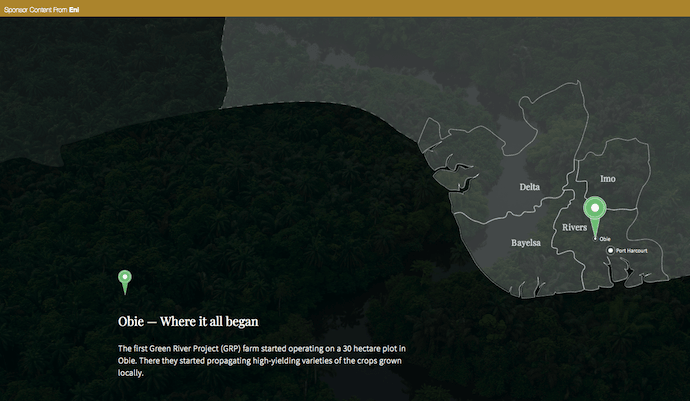 Here's an example of graphic, luscious storytelling, ripe with green landscapes, promoted by oil and energy conglomerate Eni. It focuses on the Green River Project in the Niger Delta, an Eni development program for farming and livestock to improve the livelihoods of local communities. The campaign is promoted with native ads on CNN.com, linking back to the Green River Project. It's a truly impressive example of native content.

The site is designed as a story, divided into three sections: Past, Present and Future. The content is a mix of just about everything -- text, imagery, audio, video, personal stories, animations, and illustrations. The complete look and feel is reflective of an environmental agency, rather than an oil company.

In this native campaign, Eni succeeds in distancing itself from the criticisms faced by energy conglomerates, and creates a brand image as a 21st-century social and environmental force for good, and a beacon of corporate responsibility.

This native campaign by Mercedes is an example of smooth, clean content designed to pique interest and engage the user. The campaign is called "The rise of the superhuman," and it focuses on various technologies that are turning people into "superhumans," such as robotic exoskeleton suits, virtual reality in medical settings, and the Mercedes Benz E-class series that integrates the new Intelligent Drive system.

The native content above is highly interactive, featuring quiz questions and hot spots the user can click to get more information. But one of the best things about this campaign is how it effortlessly creates a connection between Mercedes and the "superhuman." It's reminiscent of one of the oldest native examples, the "Penalty of Leadership" ad by Cadillac, which enhanced the Cadillac image as a prestigious leader. That simple print ad, published in 1915, is credited with reviving the Cadillac brand and boosting flagging sales that plagued the company at the time.

Today's native interactive Mercedes ad relies on the same principle -- creating a powerful connection between the car and the concept of cutting-edge excellence. 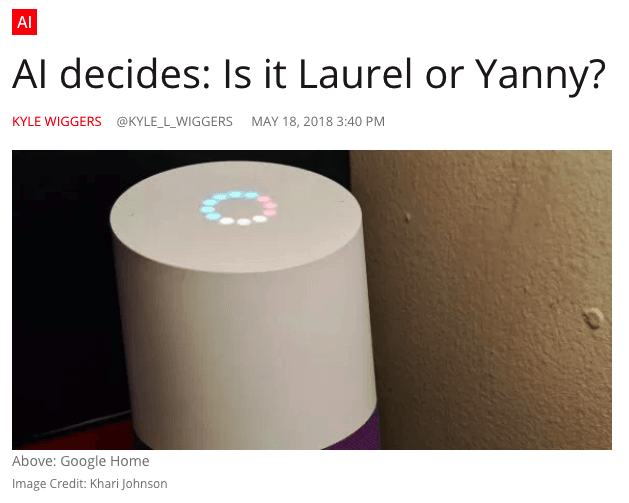 Nothing beats a viral meme in terms of sheer stickiness, and it's a great way to promote brand awareness. Recently, during the famous "Laurel or Yanny?" dispute, we saw VentureBeat take advantage of the meme in native content to promote the upcoming Transform conference on artificial intelligence and analytics. How? By using an artificial intelligence (AI) device to settle the dilemma of Laurel versus Yanny, once and for all.

VentureBeat promoted an article that briefly describes how AI was used to determine whether the stated name was Laurel or Yanny. The native article discusses some of the problems that arose, and how the engineers had to adjust the algorithms to get an accurate result.

It also opened up the issue of the limits of algorithms -- which will presumably be explored at the Transform conference run by VentureBeat and scheduled to take place in August. Of course, the article opened with a clear CTA to register for the conference, including a tempting 30% discount offer. A great example of not letting a viral meme go to waste in a native campaign. 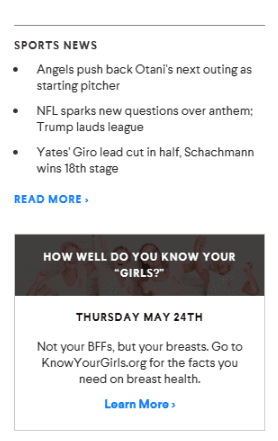 Here's a great example of native advertising used to advance a great cause. The "Know Your Girls" campaign is designed to promote breast health and breast cancer awareness among African American women in the US. Promoted natively on AOL.com, the "Know Your Girls" ad title is catchy, intriguing, a little naughty, and clearly speaks the language of the target audience.

A click leads you to an informative and well designed website that provides health resources, personal stories, and important information about risk factors, screening, and much more. The campaign is a partnership between the Susan G Komen breast cancer foundation and the Ad Council, which unites this important cause with the latest and best advertising practices. Clearly, that includes native ads. 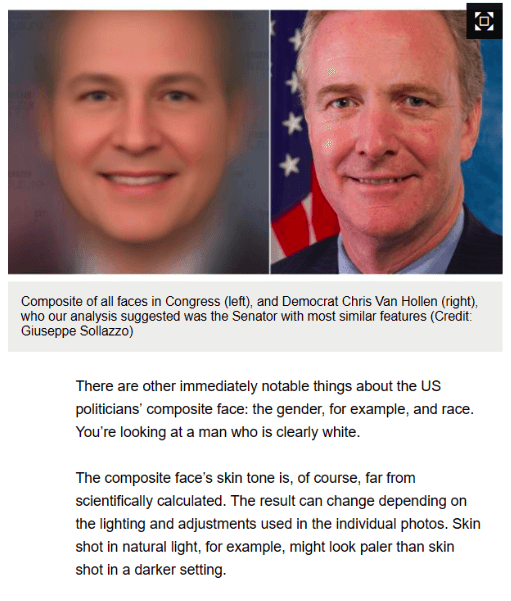 BBC Future is one of the BBC's "storytelling" channels, which connects brands to audiences via sponsored stories. An interesting example is this 2017 article, which purports to show the face of the "average American politician."

In fact, this is achieved by using technology to perform "face averaging," creating composite images of all American politicians to derive the average face.

This technology can lead to all kinds of research and suppositions about what the average politician represents, including gender, race, republican, and democrat -- all hot topics in a highly politicized time period.

The article ends with a call-to-action (CTA) to learn more about face averaging with an online tutorial on OpenCV, an open-source computer vision software. The link leads to a website, owned not by a large corporation or software giant, but to an individual entrepreneur, programmer, and blogger -- Satya Mallik. In this example, we love how native advertising is accessible to small businesses and influencers, affording powerful promotion opportunities on premium websites like the BBC. 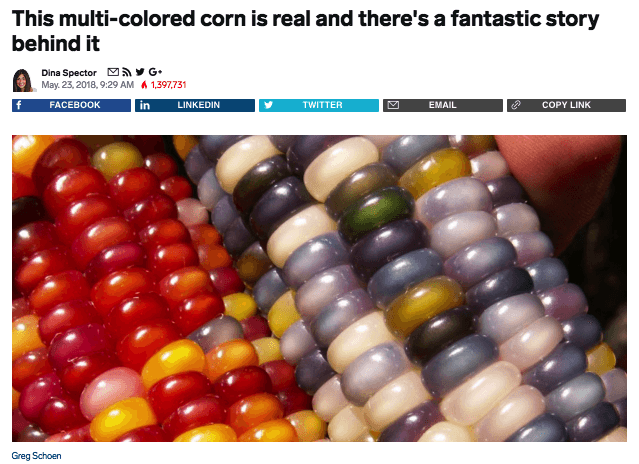 One of the best native tactics is creating a story. And if the story is visual and colorful, well, that's a huge help. Take this example of native content promoted on Business Insider.

The example above looks and feels just like a regular Business Insider article. It's about Glass Gem Corn, a multi-colored corn variety that became a public sensation in 2012. It's the story of one man and his search for his Native American roots that led him to develop the colored corn. And in true Business Insider fashion, the story of the rainbow corn is retold in amazing, bold, eye-catching visuals.

The article contains links to buy the seeds online from Native/SEARCH, a not-for-profit conservation company that now owns the product. So what's in effect a product sales page is presented as a remarkable, colorful news story.

What's most interesting about this article is the disclaimer published by Business Insider: "This article was originally published in 2013 and has been updated because the story is timeless." It just goes to show: Evergreen content promoted natively can truly be a long-term success story.

Forbes' BrandVoice is a platform for native advertising and sponsored content. Many brands have their own BrandVoice channel, such as Mitsubishi Heavy Industries, SAP, Deloitte, and even the government of Japan.

KPMG has taken its own native content on Forbes to the next level, with a campaign called "The Great Rewrite."

Big and bold (just like native advertising should be), The Great Rewrite focuses on different industries and how they are being "rewritten" in a post-innovation age. The campaign look and feel is grand and ultra modern, yet easy to navigate.

It makes its point, connecting KPMG with the future of innovation, while continually adding new "chapters" about various sectors. Each chapter is packed with content, including video, featured articles, and content recommendations. This is a great example of a native campaign that, just likes its title, is rewriting the rules of native in an ongoing, ever- growing, content-rich user experience.

These days, many native ads that we see online are truly spectacular. Some are eye-catching, others are original, and yet others offer inspiration for new ways to promote compelling content and capture mindshare.

The nine examples above are by no means an exhaustive list. However, they do give a taste as to how native advertising is constantly advancing, pushing the boundaries of content and design to create new, unexpected online brand experiences.

Facebook Text Overlay: How to Use the 20% Rule to Improve Your Ads

How to Run LinkedIn Ad Campaigns: A Beginner's Guide