8 Historic Duos to Inspire Your Sales and Marketing Alignment

Mac and cheese. Taco Tuesdays. Tango and Cash. Our world is overflowing with amazing twosomes. But not all couples are functioning like a belt and suspenders.

1) The Case of Inbound Marketing Togetherness

Easily one of the most famous and enduring duos is Sherlock Holmes and Dr. Watson. The cold, deductive reasoning of Holmes and the humanness of the gentleman Watson continue to capture audiences 128 years after they first appeared in print. Aside from the differences that make these two pair like fish and chips, it’s their extreme closeness that binds. You don’t get much closer than living together. In the original stories, the two shared a flat at 221B Baker St.

If Holmes has only one friend in the world it’s Watson. And where would Watson be without the master logician throwing him into another seemingly unsolvable case. And so it is with inbound marketing. We need each other. And the closer we are, the more successful we will be.

Sales and Marketing should be collaborating on a monthly basis about content creation topics for blog posts, white papers, e-books, webinars, and even what conferences to attend.

Marketing can’t always just refer to the data for what will resonate with audiences. They need to ask the field, listen to their stories, and hear the truth, painful as it may be sometimes.

If you’re in sales, are you writing content? If not, start now, even if it’s just a blog post every other month. You’re marketing team will love you and shower you with digital affection. And you’ll get to talk about topics that matter in your frontline battles.

The 49ers QB-receiver duo of Joe Montana and Jerry Rice were oozing with talent. But talent on a team does not always translate to playing well when it counts most. The record books are full of all-star teams who choked when it mattered. Montana said this about his star receiver: “He has two of the greatest abilities I think there is. His ability to get by a defender. And his ability after the catch to make people miss and turn a small play into a big gain.”

Rice on Montana: “Once you broke inside, Joe would put the ball there. Then it’s up to you just to become a football player.”

They had expectations with each relying on the other to perform at the right time. If Montana was your marketer firing qualified leads your way,

Similarly, if you are Rice, do you have confidence in your marketing team to?

The beauty of Jerry Seinfeld and George Costanza was the banter between the self-described “short, stocky, slow-witted bald man,” and the cereal-loving comedian. George teed up shot after shot for Jerry to whack. George: She’s got a little Marissa Tomei thing goin’ on.

Jerry: Ah, too bad you’ve got a little George Costanza thing goin’ on.

Conversations and content can be humorous and playful and when done right, can amplify your message, whether you’re in marketing or sales (preferably you’re not taking yourselves too serious, anyway). If you don’t feel comfortable with humor, you can always be self-deprecating or just playful.

Here’s a playful sales email sent to our marketing manager:

I found your Twitter profile in the "Who to follow" section and have been loving your running "broknot" references. I had been calling them "manbuns", but now that I've heard your term I'm totally gonna adopt it (the term, not the hairstyle!) I also noticed you're doing fantastic stuff in my industry with SPROUT Content.

4) The Sometimes Elusive Truth is Out There: Sharing Metrics

Paranormal phenomena aside, Dana Scully’s skepticism to Fox Mulder’s “I Want to Believe” dogmatism is what made The X-Files compelling TV every week. Scully’s job was to debunk Mulder’s theories using science… or sometimes just observation. Scully: You believe it all, don't you?

Mulder: Why wouldn't I?

Scully: Mulder, did you see their eyes? If I were that stoned -

Mulder: Oooh... if you were that stoned, what?

Scully: Mulder, you could have shown that kid a picture of a flying hamburger and he would have told you that's exactly what he saw.

In inbound marketing, science (i.e. metrics) can often reveal the truth in a neat little package. Sometimes, though, it’s not that easy. Last year, our agency’s traffic went off the cliff like Thelma and Louise. As a result, so did our inbound leads.

We looked for all the usual suspects. Nothing.

Then what was found digging deeper into our metrics was surprising: thousands of spammy backlinks pointing to one page on our site. To us, this was an X-File—as far down the explanations list as any weird light in the sky being attributable to aliens.

The spamming didn’t appear to be intentional. In fact, the offender was just one company who mistakenly published the same article 3,000 times too many. They quickly fixed the glitch.

Sales and marketing should be aligned on metrics but often aren’t. In a study of 420 B2B marketers and sales training teams, only 31% said they were metrics-coordinated.

If your sales team doesn’t have access to your metrics, share them regularly and often. Better yet, give them access. Explain them. Go deep. You might be surprised at the observations and questions you get from sales that will enhance what you’re doing.

Sales, share your metrics with marketing: number of deals in the pipeline, closing rates, revenue per sale, sales by product/service, sales cycles, etc. Explaining these will make sales seem less magical. And marketing will gain other insights such as potential new personas, which content is effective, and how many steps are involved in the process.

5) Out of Touch but Not out of Time: Share Those Needs

Whenever you hear a Hall and Oates song one thing is certain: you’ve heard these guys before. Their songs just seem to always be there. Since the Philly “rock and soul” duo first met in 1967, they’ve cranked out 28 Top 40 hits and sold 13 million albums. They’ve outlasted most S&P 500 businesses, and are still touring, sharing the stage with rockers like My Morning Jacket and even earning respect from hipsters. Though Daryl Hall is the voice, the multi-instrumentalist and formerly mustachioed John Oates, plays an equally important role with his back-up singing and songwriting.

In an interview on their success, Oates said that they fulfill a need in each other’s personalities, where Daryl has a “certain aggressiveness and a certain drive.” He describes himself as more grounded and practical.

You may not be filling personality needs, but you are filling job-related needs because sales and marketing are so intertwined. When was the last time you talked about your needs?

The purpose is not to become needy, only to find out what’s working and what’s not. Talking about needs should open the door to deeper conversations with a lot of questioning. Are we pricier overall or just in some areas? How much higher are we? How often is price a deal breaker?

6) Feedin’ Off Each Other

The first year Magic Johnson and Kareem Abdul-Jabbar played together, they won the NBA championship. They went on to win four more, plus nine MVPs, 19 all-star teams and racking up 56,094 points between them. 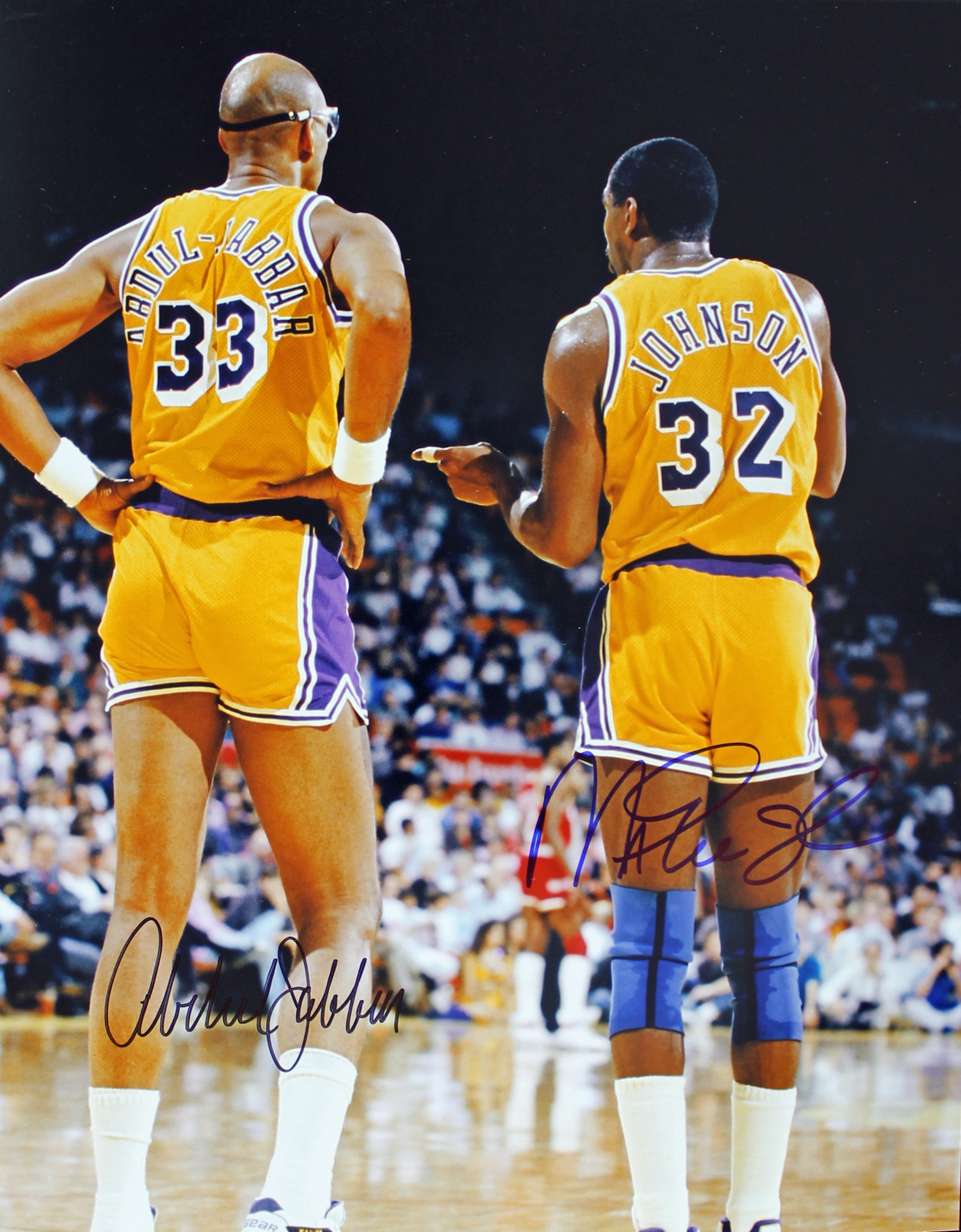 These two stars had completely different personalities: Magic, the likeable, flashy point guard and Kareem the aloof, introverted center. Though they formed an instant bond on the court, it took them five years to form a relationship off the court.

Aside from being immensely talented, they shared something else: they were able to feed off each other on the court. This intangible whether from their competitiveness or their dichotomous personalities created success.

A sales and marketing duo can also benefit from periodic grazing.

At our agency, we have a “News” section in our Teamwork app where we post successes, insights, stories and whatever else will help nourish us. Here are a few examples:

Shared by marketing: Someone downloaded one of his [client] eBooks a few weeks ago and he followed up and now how his first contract thanks to inbound marketing! This is a success story that I will use when talking with prospects.

Shared by sales: “I was drawn to your company by your tagline, frankly. I need ‘conversations’ with leads generated.” This reinforced our marketing team’s decision to keep our tagline (The Business of Conversation), which they happened to be discussing at the time.

Shared from an employee: “I’m inbound certified!” A little kick in the pants for everyone to get re-certified.

7) Got to Get You Into My Life

The genius of the Beatles is that their genius couldn’t be attributed to just one exceptionally creative member. With apologies to Ringo and George, John Lennon and Paul McCartney made the Beatles. The Lennon-McCartney duo composed and sang most of the band’s songs. And like all great duos, each brought different qualities to the table. Where John’s song writing could be sad and bluesy, Paul’s songs were usually optimistic and sunny. In their early years, most of their songs were written with input from one another. It was a true partnership.

Want to strengthen your partnership? Get them into your life.

Here’s how you both can benefit with one meeting.

Marketers, offer to jump on a call or go on a visit whenever a salesperson has a particularly tough or important opportunity. Your product/service expertise will help strengthen the company’s value to the prospect.

And you’ll benefit by seeing first-hand what questions sellers get peppered with, the objections, and how prospects perceive your solution. It’s also just nice to have a teammate to support. Do this and you’ll fortify your relationship instantly.

8) The Street Brawler and the Artist: Now More than Ever

Russell Wilson (“the artist”) and Marshawn Lynch (“the street brawler”) "probably wouldn’t be very good without the other one,” said the Seattle Seahawks offensive line coach, Tom Cable, describing his Super Bowl winning duo. “Neither one of them is bigger or greater than the other.” Back in the day, a salesperson pounding the phones all day could make a pretty good case that he was primarily responsible for his own destiny. Inbound marketing has changed that. Now sales and marketing need each other more than ever.

If you get one message from any of these duos it’s that with inbound marketing, neither sales nor marketing is bigger or greater than the other. Each has a role to play and often those roles merge and tangle and blur. But as long as they pair like milk and cookies, everything will be just fine.

For more information on improving by measuring what your sales and marketing teams are doing, download SPROUT Content's free ebook What Gets Measured, Gets Improved.