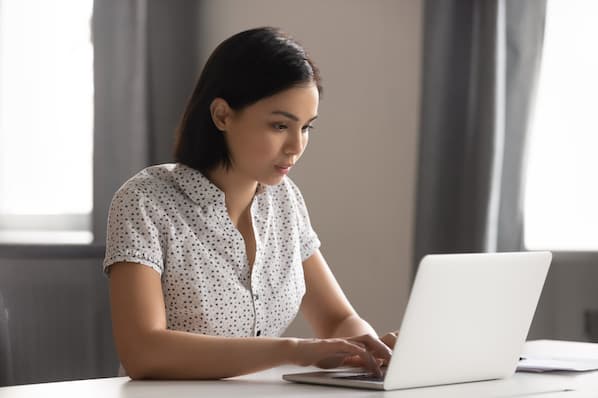 "You're sitting in the creaky, mesh-backed, black ergonomic desk chair you bought at a discount off Amazon — hunched over, eyes reluctantly wide open, staring intently at a dimly lit laptop screen bearing a blank document.

It's 4:45 PM. For most of the day, you've heard hardly anything except for the occasional click-clack of keys to commit some fruitless inspiration to your blog post and the intermittent spells of grating silence that came after deleting everything you jotted down.

The lasting taste of the coffee you drank about two hours earlier has gone sour but still coats your tongue and the roof of your mouth. And you can feel the effects of the caffeine slowly waning. Subtle muscle fatigue is setting in. Your eyelids are heavy and it's a struggle in and of itself to keep them from covering your aching, weary eyes.

Your mind has gone stagnant — trapped in the clutches of what's most commonly known as writer's block."

Now, I like to think that passage was vivid and immersive, and that's mostly a credit to the kind of language I used and the personal sensations I played on — specifically how it described the sensory experiences of the subject matter.

That language is most commonly known as sensory language, and it's a powerful resource for any writer to understand and apply. Here, we'll cover what sensory language is, review some of the data surrounding it, and go over how you can use it in your blog posts.

What is sensory language?

Sensory language is exactly what it sounds like — descriptive language that plays on the five senses. It's tailored to invoke mental images in readers. While it's often used in literature, sensory language can also have a place in copywriting and marketing in general.

Sensory language is used to describe the five primary senses — touch, sight, sound, smell, and taste. They're most commonly used to convey the specific details of scenes or add a more imaginative element to concept descriptions.

Sensory language is most commonly associated with literature. It's a central component of most fiction and poetry, but that doesn't mean this kind of vocabulary is exclusively artistic in its application. Marketers stand to gain a lot from understanding how to leverage it as well.

Let's take a look at some of the data on sensory language to get a better picture of why it's effective and how to apply it.

What Data Says About Sensory Language

Our day-to-day experiences are multisensory, but that's hard to capture linguistically.

A 2012 study from Charles Spence, published in Science Direct, established that "most of our everyday experiences are multisensory." Very rarely — if ever at all — are our senses siloed when we perceive the world around us.

That said, the English language is limited in its ability to capture that phenomenon and general sensory overlap. In his book Sensory Linguistics: Language, Perception, and Metaphor, linguist Bodo Winter, explains those limitations by describing the experience of eating Kimchi.

He says, "The experience involves the salty and spicy mélange of pepper and garlic notes that excite the taste buds, on top of the fermented smell, the tingly mouthfeel, and the crunchy chewing sound."

Though his description is vivid and engaging, he notes that "conveying this experience forces the use of decoupled sensory adjectives such as salty and crunchy. The compression inherent in these words, each one singling out one aspect of the experience, means that the simultaneity of the multisensory taste experience cannot be conveyed."

This passage helps illustrate what might be the main challenge that comes with using sensory language. Ultimately, the goal is to capture a seamless multisensory experience, but the language you have at your disposal is mostly categorized by individual senses.

Taste and smell are the most difficult senses to describe.

The five senses are essentially tiered when it comes to expressing them linguistically. Certain senses are more ineffable — or difficult to put into words — than others.

A 2014 study from Stephen Levinson and Asifa Majid, published in the journal Mind and Language, found that “in English, at least, it seems generally easier to linguistically code colors than (non-musical) sounds, sounds than tastes, tastes than smells."

Everyone's sensory perceptions are different, but how we individually experience taste and smell — also known as "the chemical senses" — is particularly unique.

A landmark 1990 study in the journal Physiology and Behavior found that the number of taste buds humans have on their tongues can vary radically from person to person. It's also been found taste and smell vary as a function of factors like age, gender, and culture.

In short, it's tough to capture the essence of senses so personal and, in turn, ineffable. And the English language's limited vocabulary for the senses doesn't exactly make things easier.

As Winter puts it, "Detailed descriptive characteristics of smells are not encoded in the English lexicon." Instead, smell is often described in terms of perceived pleasantness through words like aromatic and pungent.

It might seem like taste and smell have less practical application in marketing — especially when it comes to elements like blog copy — but don't count them out. You can get a lot of mileage out of those senses if you can convey them articulately and compellingly.

The perception of taste and smell is more emotional than other senses.

Though these senses are harder to capture, it's in your best interest to try when appropriate. Sensory language is used to invoke meaningful images and feelings. And research indicates that language describing taste and smell bear more emotional weight than other kinds of sensory language.

This point can mean a lot in the context of certain schools of marketing. If you can believe it, emotionally charged and compelling language can be an asset to a company's emotional marketing efforts.

And if you're interested in using sensory language in your copy in the interest of that cause, it's worth having a pulse on which aspects of the concept are the most emotionally evocative.

As I mentioned, our perception of the world around us is always multisensory, so it's intuitive to assume that we're naturally more receptive to marketing that reflects those kinds of experiences. And the data on the subject is consistent with that notion.

A 2009 study published in The Journal of Consumer Research focused on how multisensory advertising impacted subjects' perceptions of taste. It found that multisensory ads result in higher taste perception than ads focusing on taste alone.

And while the study focused primarily on multisensory advertising's impact on a single sense, other researchers have extrapolated upon its findings and assumed it applies to the other senses as well.

What does this tell us? Well, this means that multisensory marketing — supported by tactful use of sensory language — is more engaging and enriching than marketing that focuses solely on conventionally touched-on senses like sight or sound. It shows that there's tremendous value to using a robust sensory vocabulary in your copy.

How to Use Sensory Language in Your Blog Posts

Understand when it's appropriate to use.

First and foremost, you need to understand that sensory language can seem awkward and jarring when you force it in certain contexts that don't necessarily warrant it.

For instance, if you're writing a matter-of-fact, professional post about a business concept, you probably wouldn't want to use sensory language while defining it.

Take this definition from a HubSpot blog about strategy consulting:

"Strategy consulting is when businesspeople — generally executives, boards, or management — bring in a third party to offer an outside, expert perspective on their business challenges. Strategy consultants usually have considerable industry knowledge and are expected to assess high-level business issues objectively. They take a holistic look at specific problems companies are dealing with and give advice on how they should approach them."

It's more appropriate to keep that aspect of the article more straightforward and professional. Overloading it with sensory language might undermine your ability to clearly establish what the concept is. That said, there are ways you could incorporate sensory language to bring that dry concept to life and make it engaging.

Even though sensory language might not be the best way to convey the more rigid, objective aspects of your post, you can still use it to qualify and illustrate certain concepts. One of the best ways to do that is by giving your piece some narrative flair.

This method gives you some space to use sensory language and make concepts more engaging and entertaining. Here's an example of how you could do that when covering the concept of strategy consulting I just described above:

"Picture this: A CEO sits, poised in a high-backed pleather chair at the head of an engineered wood conference table, eyes shut tight with a cast of stuffy, sharply suited board members flanking the table's sides. They look on intently — expressions caught somewhere between frustration and desperation.

The smell of stale coffee and the special kind of silence that only comes after an hour or so of beratement hang in the air. Day has turned to night out the floor to ceiling windows without any resolution about how to amend the company's recent marketing campaign — the one that's been trending on social media for all the wrong reasons.

The CEO finally opens their eyes, and in a tone that's equal parts stern and exhausted, they say it: 'We need to bring someone in.'

With that kind of description, I was able to set the stage, capture reader attention, and pave the way for a more thorough description of what a strategy consultant does.

Use metaphors or similes.

This point ties into the one above — to a certain extent. Sometimes the subject matter you're writing about is too dry to pull a narrative from without coming across as desperate to force sensory language on a concept that it doesn't naturally gel with.

In those cases, it can help to use metaphors or similes — rife with sensory language and vivid description — to simultaneously engage and inform the reader. For instance, let's imagine you're writing a piece about quote graphics. You might want to incorporate something like this:

"Think of your quote as the entree to a Michelin star meal — an immaculate cut of filet mignon that tastes like heaven and cuts like butter.

It's the centerpiece of the dish, and it's delicious in its own right, but some side dishes and 'eye-eats-first' presentation would take it to another level. By filling out the plate with crispy, golden-roast potatoes and perfectly charred, still-sizzling Brussel sprouts, you can take the dish from 'intriguingly a la carte' to 'bonafide five-star.'

That's the fundamental principle behind quote graphics. The engaging backdrop, distinctive font, and other engrossing visual elements you use can elevate your content and make it compellingly complete."

Though it might not always be obvious, you can often find ways to incorporate sensory language into your blog content. And when done tastefully and effectively, it can pay off in spades. So if you're interested in finding ways to add some oomph to your blog copy, consider taking some time to better understand sensory language.

How to Make the Most of AI Writing Tools, According to Bloggers

Is Blogging Too Saturated? Here’s How To Avoid Failure