When I was just starting out management didn't seem like a career choice; it seemed like an inevitable. Something that would just sort of happen once I got old enough -- like wrinkles, or gray hair, or distinctly unfashionable pants. I figured: You work long enough, you'll manage someone.

I liked the idea of managing because it felt like progress. I wanted that nebulous trophy of achievement. I wanted it bad. But then something important happened ...

I started actually achieving. I was progressing in concrete and measurable ways that had nothing to do with management. And I saw my peers do the same. They were climbing into new and more challenging roles -- some involved management, but others advanced them as highly skilled and sought-after individual contributors.

Seeing the diversity of paths that careers can take, I stopped thinking about management as some sort of suit-sporting end-goal. And then I became a manager, and discovered that that realization was only the beginning of what I had to learn.

For starters, the skill set is totally different. In fact, the skills you mastered to become a top performer on your team might challenge you most as a manager. It's like spending your whole life developing skills as a tuba player, then being handed a baton. You could be a brilliant conductor eventually, but in the beginning you'll pretty much look like you're shooing flies longing for the days when you played music more directly.

Management is tricky like that. Unlike some roles, which can be studied in advance, most management skills are best learned on the job. You're going to make mistakes. Embrace them and learn from them. And if you need a little guidance, check out some of the lessons I learned below.

1) Don't aim to be liked. Aim to be transformational.

The first inclination of many managers is to make sure their team likes them. It makes sense -- you catch more bees with honey than vinegar, and you must be doing something right if people like you. But managers who focus too much on being liked miss the bigger picture. You do more for your team and for your company if you focus on being instrumental -- even when doing so requires an unpopular decision or a bit of radical candor.

I learned this directly from HubSpot's CEO Brian Halligan. Brian is widely regarded as likable guy, but he'll trade in that popularity in a second if it stands in the way of a decision he thinks is critical for the company and its customers. He explained this thinking recently in a personal post:

"I think the leadership hierarchy of needs is that managers need to solve for enterprise value first, then solve for their team, and then themselves. Oftentimes when managers on my team have stumbled, it’s because they got that equation wrong. Ironically, in almost all cases where this happened, the manager solved for his team, not for himself first. Inexperienced managers tend to coddle their teams, overspend on their teams, and put their team’s interest over the company’s interest if not properly guided. This coddling works for a while, but ultimately always breaks."

2) Don't worry if your team doesn't always need you.

I wrote this in a similar post a few years ago, but it bears repeating: The scariest realization I had when I started managing was that my team would be perfectly fine without me.

Do you have any idea how terrifying that is?

I remember thinking, "My one job is to manage these people, but they're managing just fine." And I felt useless. As it turns out, I was an idiot for feeling useless.

I should have felt elated. I had a strong team. If you’re hiring right, you should be bringing on people who are fully capable at managing themselves. You should, in fact, be bringing on people who are smarter than you. It turns out management has very little to do with managing and almost everything to do with developing. Developing people. Developing opportunities. And developing new uses for raw talent.

Left alone, your team will manage just fine. But here again, just managing shouldn't be the end goal. The end goal should be excelling.

Managers who are too worried about being needed will spend all their time and energy on the wrong things. They will micromanage. They will put up hoops. They will inadvertently limit the potential of their team just to justify their own role in it. And the honest-to-God truth is: If you have to tell people you’re the authority, you’re likely not.

I'm nice. I can't shake it. As a teen, I listened to Rancid and Social Distortion in an effort to toughen up. I learned to curse like a sailor to add edge to my sentences. But the truth is, I'm just nice. It's never going to leave me. That made this lesson a particularly hard one to master.

Good coaches don't hold back hard feedback. They don't couch it to soften the blow or sandwich it between two compliments. They just tell it like it is. Couching tends to confuse the people receiving it rather than help them. You're not doing them any favors. You're only making yourself feel less mean. 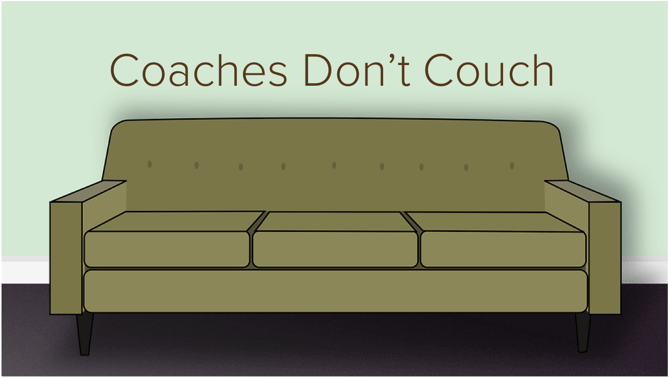 There are two ways people fail at this:

You can tell your direct report anything if they trust that you are doing so because you respect them.

Kim Scott, an author who's previously worked with companies like Twitter, Apple, Google, and Dropbox credits much of her development to having mentors who understood the critical intersection between these two things. In an interview with The Growth Show she recounted the time her mentor Sheryl Sandberg told her that the "ums" Scott had been interjecting while speaking made her sound unintelligent -- well, actually not unintelligent, "stupid."

“It was actually the kindest thing that Sheryl could have done for me. But part of the reason why she was able to do it for me was that she had shown me in a thousand ways -- and everybody that worked for her -- that she really did care personally about our growth and our development.”

Had Sandberg softened her feedback it may not have resonated so strongly. Had Scott not trusted that Sandberg wanted the best for her, she would never have put her defenses down to truly hear it. The combination of the two made this an important and formative moment for Scott.

When was the last time you left a meeting and thought, "That was exceptional."?

It's been awhile, right? For many, it's been a professional lifetime. While most productivity articles focus on finding ways to shorten meetings and optimize work-time, a better question might be: What would it take to make meetings actually worthwhile? It's a responsibility that sits largely in the hands of managers.

It may seem like a silly little thing, but the clearest way you can show your team you respect them is to prepare for team meetings. Don't just show up. Don't adhere to the same agenda month after month. Make every second of your meeting productive, educational, or interesting. You will inevitably bobble this. You will have some bad meetings, but it's a skill worth honing.

Treat your meetings like college professors treat their seminars. Set aside time before each major meeting to prepare for it. If a meeting takes your team away from their work for an hour, then you better be sure you put in the prep time to make that hour as productive as possible.

Make your meetings interactive. Research suggests people lose focus in a lecture somewhere between 10 and 18 minutes. At that point both you and your team need a break from hearing the sound of your voice. It's okay. Build that in. Tap members of your team to present or shift into a brainstorm when you hit that point. Again, make sure everyone presenting does the prep work and respects the time that their teammates have given up to be there.

5) You can't approach everyone the same way.

The one thing that has helped me the most as a manager, on both good days and bad, has been understanding the people on my team. It sounds obvious, but taking the time to get to know what motivates each team member and what discourages them is a strategic advantage. Having this understanding means that you can play to the strengths of individual team members when assigning projects and adapt feedback to the way each person learns.

There are a number of trainings and personality tests that can help you know your team better. Here at HubSpot, we use something called a DiSC assessment to help classify work styles so new managers have a basic roadmap. The real understanding however comes over time, through conversation, and by paying close attention. It doesn't hurt to ask directly how each person likes to be recognized for a job well done and what makes them happiest in their role. Use one on one meetings to discover how you can best coach the members of your team and what they're looking to do next in their roles and their careers.

There is no grand conclusion here. Everything you've just read comprises a starting point, a few stumbling blocks of what could be many in the path to managing well. That I suppose is the bonus lesson: Managers are almost never fully cooked. There are always more mistakes to be made and greater lessons to learn. But if you get a few essentials right, including those in this post, you'll have a good navigational compass for learning the rest.

What do you wish you knew before you became a manager? Share your thoughts in the comments section below.