The 4 Reasons You Chose a Bad Company Name ... Now What?

Picture the scene from the film The Social Network where a fast-talking Sean Parker (played by Justin Timberlake) glides into a lunch meeting with Mark Zuckerberg, Christy Lee, and Eduardo Saverin. 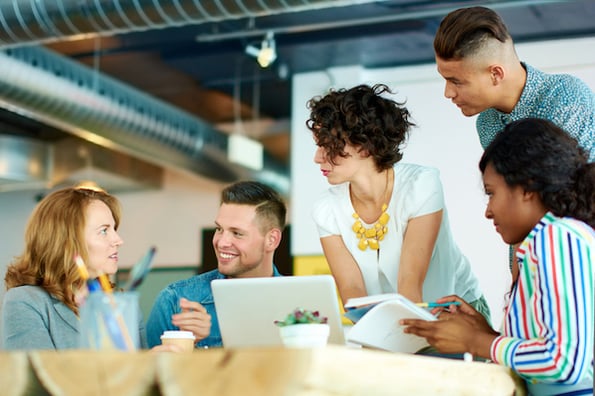 Sean confidently expresses how he envisions the company's thrilling growth, impressing two out of the three start-up enthusiasts.

And then, right before his sudden departure, Sean offers a piece of advice to the crew, a recommendation that Eduardo passive-aggressively states was Sean's biggest contribution to the company: "Drop the The. Just Facebook. It's cleaner."

Would The Facebook have been as successful as Facebook? Many will argue no. Sean's influence led Mark to update the company's name and further pivot the platform toward the minimalistic look we know today.

Of course, there's no one-size-fits-all approach to naming a company. The naming patterns that work for a social network may not necessarily work for your company. However, regardless of industry, selecting your company's name can make all the difference to its eventual success.

Here, let's explore the components of a "bad" name, so you can ensure you avoid these mishaps if you're currently in the naming stage with your own company (or the re-branding stage).

Mark's decision proves that a change as little as 'The' can have a huge impact on branding and strategy. However, Facebook isn't the only company that made tweaks to its name. In fact, many companies we embrace today underwent complete name changes or rebrands.

Google, the most popular search engine in the world, had a very different early name. The search engine's first name was BackRub, referring to the way the search engine analyzed backlinks. The name was short-lived and Google was trademarked on September 15, 1997.

On July 6, 2006, 'Google' became a newfound verb in the English dictionary. Merriam-Webster announced it added Google as a transitive verb, meaning "to use the Google search engine to obtain information about (someone or something) on the World Wide Web."

Let's consider another example — would you take a sip of Brad's Drink? Probably not. But most of us have tried a Pepsi. You guessed it, they're the same soda. In 1893, Caleb Bradham developed a drink recipe after formulating a unique concoction of cola nuts and spices. Proud of inventing a unique beverage he believed to be a healthy cola alternative, Caleb named the recipe Brad's Drink, after himself.

Five years later, Brad's Drink was renamed Pepsi-Cola after the pepsin enzyme that supports digestion. The brand later shortened its name to Pepsi in 1961 — which sounds much more refreshing, in my opinion.

And finally, Dunkin' Donuts decided to rebrand after 68 years with the same name. Originally named Open Kettle, founder William Rosenberg served donuts and premium cups of coffee. After a brainstorming session with executives, William renamed his restaurant to Dunkin' Donuts in 1950.

In 2018, the company announced it would shorten its name to Dunkin'. The name change was one of many steps to transform itself into the premier beverage-led, on-the-go brand. "Dunkin' is a shorter, simpler, more modern version of who we've always been," explained Dunkin' U.S. CMO Tony Weisman. By shedding Donuts, the brand redirected focus on beverages, where profit margins are much higher than donuts.

These accomplished brands found their former names limiting and sought to thrive with a brand refresh.

Names go beyond vanity — studies suggest that a name has a significant impact on a company's bottom line. In fact, a report on behalf of the Society of Personal and Social Psychology, Inc. discovered stocks with easier-to-pronounce names performed up to 33% better those with names more difficult to pronounce.

What makes a name bad?

Names, like all words, vary in connotation and audience reception.

When brainstorming, it often feels that the "good" names have already been claimed. After all, over 627,000 new businesses open each year. This can make naming a business feel like a competitive, and almost impossible, process.

But this is the phase in the process where you can evoke your creativity and innovation. As you create, you must remain cautious of what will lead you toward selecting a name that you may later regret.

Here are the top four reasons you might end up with a "bad" name.

1. Not establishing your tone. Before diving into your brainstorm, it's imperative that you select a tone that's right for your brand and industry. The five tones that names typically fall under include modern, classic, playful, pragmatic, and emotional. Even Google learned quickly that their first choice, albeit playful, was not the right tone for the tech world at that time.

However, you can push your industry's boundaries and select a tone that might stand out in your vertical. Apple, for example, selected an organic object as their name when the rest of the industry at the time was using tech-focused jargon and acronyms. If you do decide to go against the grain, be sure that the rest of your branding and marketing strategy strongly supports this direction.

2. Believing the shorter, the better. There's a common misconception that a successful brand name should be short. This is not necessarily the case. In fact, locking down a short name may be costly, especially when securing domain names and social media handles.

For example, Uber's first website was UberTaxi.com. In 2010, Uber purchased Uber.com from the owner, Universal Music Group. Still a new company, the rideshare start-up used equity to purchase the domain. Universal Music Group sold their stock back to Uber for a mere $1 million. Four years later, Uber's worth was reported to be $17 billion.

Additionally, if you find that a similar business is already using the name or a similar name, you risk confusing your customers or possibly running into trademark conflict. Before deciding on a shorter name, be sure to conduct thorough research.

3. It's complicated, literally. In the naming business, we encourage creatives to think outside of the box. In fact, story-driven business names allow for brands to connect with audiences and evoke connection. However, a name that is too complex can become problematic. A strong name is often easy to spell, hear, and pronounce. Complicated names will make it hard for customers to find you online, remember your brand, and share it with others.

In a report conducted by Prezi, 80% of consumers forget branded content after only three days. Consumers cited that there was simply too much content to retain. Make it easy on customers by brainstorming names that are easy to remember.

4. Loving a name too soon. Love is blind. And so is falling in love with a name early on in the process. Many times, we have a preference based on our assumptions, personal connection, or unconscious bias.

For instance, in the Summer of 2019, Kim Kardashian West renamed her Kimono shapewear brand to Skims after being accused of cultural appropriation. These are the real-world consequences of untested or misinformed name choices.

After brainstorming, it's highly important to audience test. Audience testing will offer valuable insight into the names that will appeal to your target market. Your business may choose to run surveys through relevant forums, Facebook groups, and audience testing services to obtain relevant opinions on your business name ideas. As the results come in, you may discover that the name you initially loved does not have a positive connotation or resonates with key stakeholders.

The name you select is truly the cornerstone of your brand. It is your brand's identity channeled in one or two words. A brand name is the foundation of your brand's personality, therefore you must uncover one that reflects your company.

Now that you know what makes a "bad" name, you can move forward in selecting a strong business name — sans The.