A Guide to the Trait Theory of Leadership 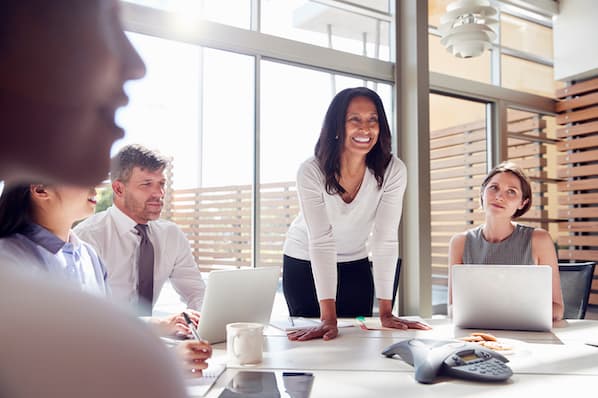 Ask "What makes a great leader?" and you’ll get a different answer every time.

That meaning continues to evolve over time.

One concept that has long been debated is whether leadership is innate or learned.

Some see leadership as a black and white concept: Either you’ve got it or you don’t. But is that really true?

In this article, we’ll explore the trait theory of leadership and what critics say about it.

What is the trait theory of leadership?

The trait theory of leadership is based on the concept that leaders are born, not made. It asserts that certain leadership traits, like intelligence, creativity, decisiveness, are innate and thus separate leaders from followers.

This idea, first introduced in the mid-1800s, looks at certain traits as inherited, such as:

For a long time, this was the agreed-upon idea in society. You either had what it took to be a leader, or you didn’t.

The trait theory and approach have served as a benchmark for how we look at our leaders. It puts the emphasis on the person, rather than the followers or environment – which can be helpful in understanding why people gravitate toward particular leaders.

Then, about a century later in the 1940s, the narrative expanded.

Researcher Ralph Stogdill discovered that some people were leaders in some situations, and not in others. This contradicted the trait theory idea and introduced leadership as something that was influenced by the environment.

Think back to your group projects in college or high school.

Where did you fall in the roles? Were you the leader, the supportive but quiet contributor, the I’ll-do-everything-myself, the absent last-minute helper?

You might have been all four depending on the situation. Perhaps you only feel comfortable stepping up as a leader if no one else wants to.

With this in mind, there are several additional leadership theories:

Now that we know which theories are out there, let’s talk about what critics say about the trait theory.

Criticisms of the Trait Theory of Leadership

Many leaders today strongly disagree with the trait theory of leadership.

They believe that anyone can learn and build the skills needed to succeed as a leader. A small survey sample of U.S. consumers echoed this sentiment.

And there is some research to support this.

A 2008 study on heritability and human development found that 70% of leadership capacity is not inherited genetically, but rather learned through experience.

Additional research studies suggest that few traits differentiate leaders from followers. When comparing leaders with their followers, there are little differences in the traits they possess or have the potential to possess.

Another criticism of the trait theory is that it overlooks socio-economic inequities.

How do you determine who has the potential for leadership if your population doesn’t begin at the same starting line?

For instance, marginalized groups who grow up in underfunded and undersupported communities may not have the same opportunities to showcase their leadership abilities. Their abilities to develop this potential may also be limited.

With this in mind, some view the idea that leadership is inherited as flawed, as it does not factor in all variables.

These two concepts fall on opposite sides.

The former argues leadership is innate, while the latter maintains that it builds over time as a result of the interactions between the leader and follower(s).

As a process leader, you are responsible for nurturing relationships with others and offering support. Through time, the theory states, you will gain the role of a leader and create an environment in which your followers can succeed.

Leadership is nuanced, and as such, can operate within various models and environments.

For the trait side, everyone is born with personality traits, talents, and gifts, which make us more likely to succeed in particular environments and roles.

For instance, an extrovert can exhibit the qualities of a leader. They have little trouble in social settings and they communicate with confidence. With this in mind, they likely won’t have to work as hard as an introvert to engage with their peers, colleagues, and leaders.

However, an introvert can build those same skills through exposure and experience. On that same note, an introvert may rise to the occasion in more intimate settings.

What’s more, leadership is a constantly evolving concept. While the trait theory was initially the most popular way of viewing leadership, more theories have evolved that expand our understanding of it.

For instance, conversations surrounding psychological safety have only recently gained traction in the workplace. Leaders are now trained on creating an environment in which employees feel safe to share ideas, concerns, and mistakes.

As our understanding of what works best to motivate teams, leadership styles also evolve. As such, there will always be an educational component to being a leader.

There isn’t a right or wrong theory when it comes to leadership. All theories provide some insight into what it takes to be successful as a leader.

While the trait theory offers a rubric for the qualities of a leader, the process theory focuses on how to nurture relationships. The situational leadership model views leadership as a flexible concept that is heavily based on the environment.

If you’re working toward a leadership role, consider these models and use them as building blocks to find your own style.

The Ultimate Guide to Succession Planning

Want to Be a Better Manager? Work on These 7 Management Skills

What is Expert Power and How Can You Develop It?