Why Twitter Says Losing Millions of Users Will Benefit Advertisers 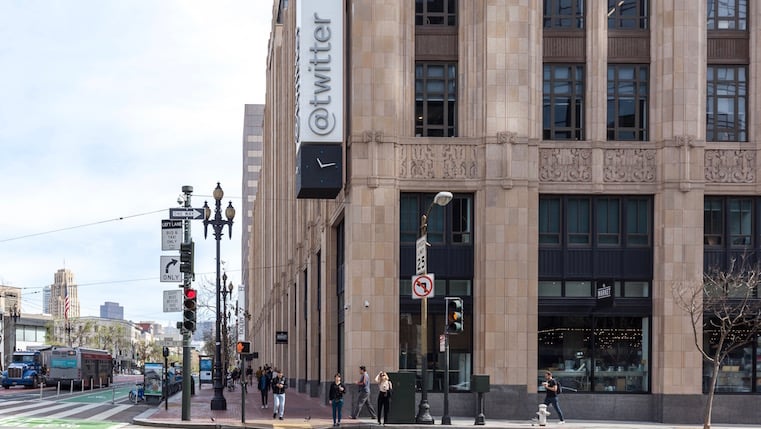 Twitter reported a loss of one million monthly active users (MAUs) in Q2 2018 -- and says that it expects to lose millions more in Q3.

At the same time, its total revenue is up by nearly 7% -- which the company says could, perhaps, be the result of this decreased user base.

While that second cause-and-effect claim may not make sense on the surface, there's an explanation. And that drop in MAUs? Well, after months of the company confirming sweeping account removals, it doesn't exactly come as a surprise.

But questions still remain. Here's a look at some of the numbers -- and what they mean.

Why Twitter Says Losing Millions of Users Is Good for Advertisers

Let's have a look at some key figures. 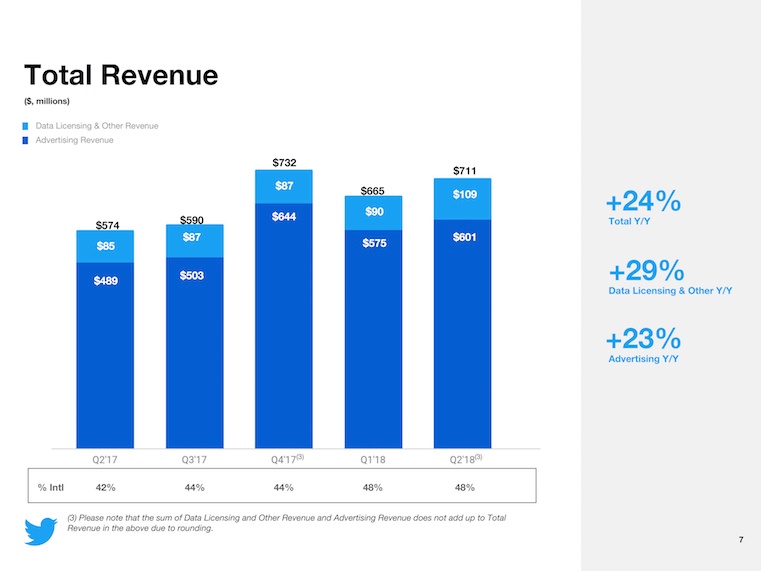 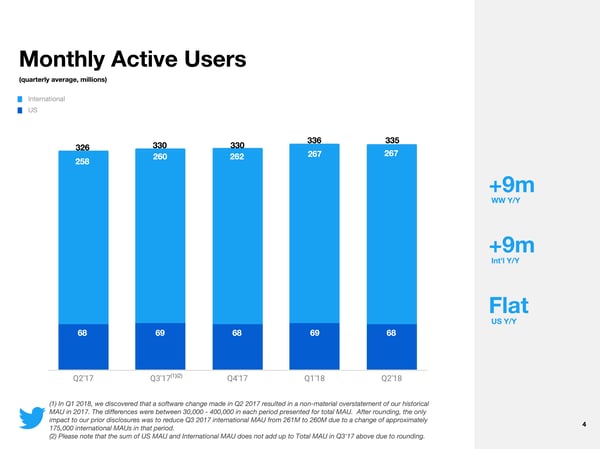 Twitter did not provide raw numbers for daily active users (DAUs), but says that the number has grown by 11% year-over-year. 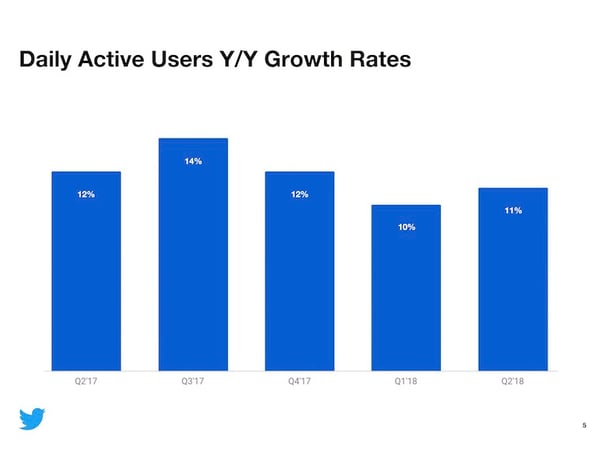 The Potential Benefit to Advertisers

At one point in the call, an analyst asked Twitter executives if a further drop in MAUs -- like one in the "mid-single-digit millions," which the company has forecasted for Q3 -- would ultimately impact revenue.

First, let's put those figures into context. I broke it down earlier on Twitter:

But, the numbers are going to continue to fall. Using 6M MAU as a *hypothetical* example of "mid-single-digit millions of MAU" -- that would be a drop of ~1.79%. But it depends on where the users are based. If it were 6M in the U.S. alone, that'd be a drop of ~8.8% domestic MAU pic.twitter.com/TQ3OYMO1t7

But over the past several months, Twitter has emphasized over and over again that it is prioritizing the health of its network, going as far as launching a pubic request for proposals to measure it.

These efforts have often included the removal of user accounts -- often in the millions -- and the implementation of machine-learning-driven signals to proactively remove abusive accounts, or stop them before they get to the point of becoming fully created. One of Twitter CEO Jack Dorsey's key opening points was the company's acquisition of Smyte, which "specializes in spam prevention, safety, and security."

Naturally, moves like these are going to lead to a drop in active users. The company pointed that out in its earnings report, where it noted that "our efforts to improve the health of Twitter impact our disclosed metrics [and] our work sometimes includes the removal of accounts, some of which are included in our metrics."

Now, let's go back to the analyst's question: Does a drop in active users have an impact on revenue?

The company's answer, in short, was "yes" -- perhaps a "constructive" one. Even though the total MAU count was lower by one million (and will continue to drop), it leads to reaching a more engaged, authentic audience for advertisers -- and, therefore, a higher return on investment (ROI).

In fact, according to the earnings report, "total ad engagements increased 81%" -- which Twitter says is the partially result of "increased demand."

As for the prioritization of network health, HubSpot CMO Kipp Bodnar says Twitter is moving in the right direction.

"The other core opportunity at play is that unlike Facebook," he says, "Twitter is an open network that generates value not only from its users, but also for non-users consuming content on its platform."

At the same time, adds Bodnar, "I think Twitter is making right decision, but the time horizon for improvements in its user base is unclear, and that is likely concerning to investors."

That could explain why Twitter's stock price saw a drop in the pre-market hours leading up to the earnings call -- as well as those following the New York Stock Exchange opening bell. 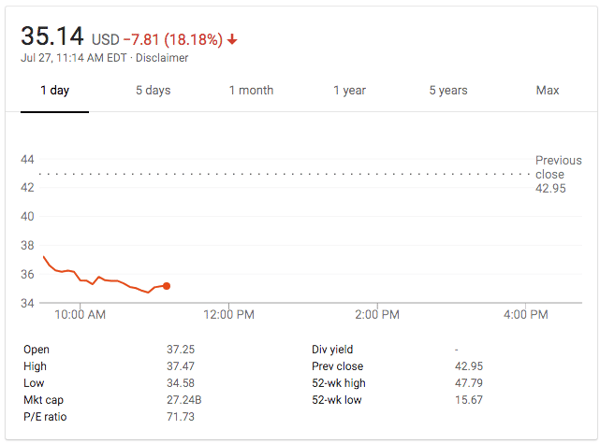 And while Twitter says that this narrowed user base is ultimately beneficial to advertisers, Bodnar says it could give pause to some.

"Twitter has the opportunity to deliver on revenue growth, despite slowing user growth," he says. "However, mass-market advertisers looking for scale to deliver their messages will be less interested in Twitter if the platform's user growth continues to decline."

But current audience engagement might not be the key issue -- and hasn't been historically.

"Twitter has never had a problem with its core users staying engaged. It's struggled to get new users engaged," says HubSpot VP of Marketing Jon Dick. "I'd view the decrease in MAUs as a sign that it's not growing its audience effectively."

Based on our internal research, that may be the case. When we asked 596 internet users across the U.S., UK, and Canada if they've jumped ship from the Twitter network over the past three months, less than a quarter said that they have -- but a higher percentage (28.6%) said that they've never used Twitter in the first place. 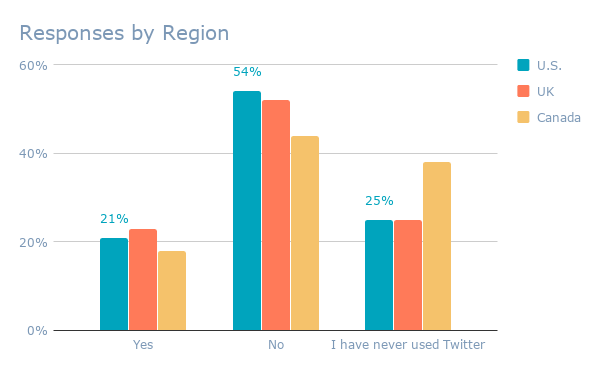 While not quite as high-profile as the instances on Facebook, the network was weaponized to influence the 2016 U.S. presidential election, leading to multiple testimonies from its executives before lawmakers. This September, Dorsey is slated to join Facebook COO Sheryl Sandberg, as well as a yet-to-be-determined representative from Google, in testifying before the Senate Select Committee on Intelligence on election interference.

It's largely this weaponization that has caused Twitter to purge so many accounts. And such sweeping removals, says Dick, have the ability to impact other metrics long-term -- perhaps calling for a complete reset and new approach to measuring them.

It could be, he says, that Twitter "just needs to start fresh."