If you're a marketer of any kind, this phrase is probably lurking somewhere in the back of your mind when you start a new project:

"How do we make this brand really stand out?"

The constant battle to differentiate a brand in a crowded playing field is challenging, and it's pushing some marketers to the extreme.

We've rounded up 14 creative campaigns and promotions that rely on unconventional mediums to spread brand messaging to consumers. Check them out below for some unique inspiration for your next big campaign.

This marketing stunt from Nivea made for some interesting headlines when it debuted at Cannes in 2016: Seagull drone poops sunscreen...uh, thanks (CNET), Nivea's Drone Bird Poops Sunscreen on Your Kids (Dronelife), How Bad Was This Nivea Bird Poop Sunscreen Project, Really? (AgencySpy). The list goes on.

The folks at German agency Jung von Matt/Elbe designed this seagull drone to squirt Nivea Kids Sunscreen onto unsuspecting children on the beach. In the case study video below, they explain how the drone can be used to make sure all kids are protected from the sun, even when they refuse to apply sunscreen themselves. It may seem like a parody at first, but make no mistake: This drone is 100% real.

Say what you will about the taste level of the pooping seagull concept -- it definitely generated a lot of attention for Nivea and left an undeniably memorable impression. Cannes Lion jury president Sir John Hegarty told a group of journalists, "It’s the most stupid thing I think I’ve seen in my whole life. I actually thought the Monty Python team had gotten together and entered it into [Cannes], to see if we would vote for it."

Spoiler alert: They didn't vote for it. Nivea's well-intentioned pooping seagull flapped away from Cannes without any awards.

When Swiss chocolate company Milka launched in France, they turned to Paris-based agency Buzzman to devise a unique way to introduce their product to the French people. The chocolatiers ended up removing a small square from 13 million of their classic milk chocolate bars, and giving consumers a choice: Do you want the "last square" sent back to you, or do you want to send it to a loved one?

Consumers who received a Milka bar with a missing square were given a code they could enter online, where they could either send a small piece of chocolate -- along with a personalized message -- to a friend or family member, or enter their own address to have the missing piece returned to them.

Who says the physical press release is completely dead? To promote industrial brand Cub Cadet's newest riding lawnmower, agency Colle+McVoy came up with a steel alternative to the classic 8.5-by-11 inch paper document.

The press release -- which weighed in at a hefty 14 pounds, 13 ounces -- was made entirely of Cub Cadet's signature Triple 7-gauge steel, the same material used in their rugged lawnmowers. Outfitted with bolts and shipped to media outlets in a custom crate, the press release also came with a free crowbar (because why not?). 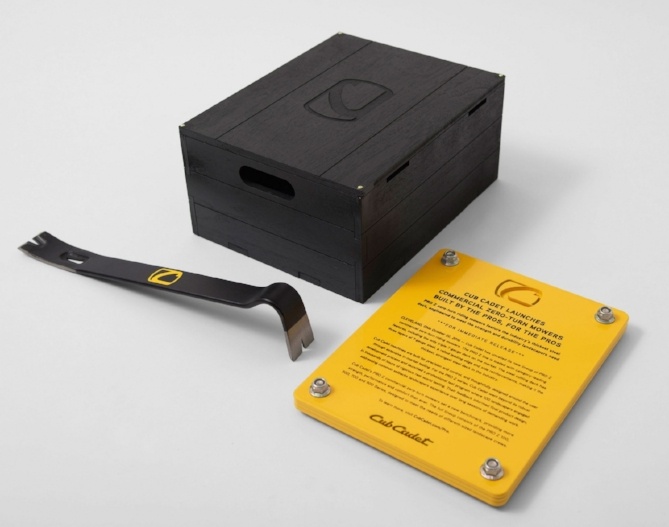 4) The Art Institute of Chicago and Airbnb

Have you even dreamed of walking into one of your favorite paintings? How about staying the night? In this creative campaign to generate publicity for the Art Institute of Chicago's Van Gogh exhibit in 2016, agency Leo Burnett partnered with Airbnb to create a unique, immersive experience for art lovers.

The agency worked with designers and museum curators to meticulously transform a simple studio apartment in Chicago into one of the Dutch artist's most recognizable paintings, Bedroom in Arles.

As part of the campaign, posters advertising a room to rent and resembling vintage newspaper classified ads were plastered around Chicago, inviting passersby to text "Van Gogh" -- aka, Leo Burnett's clever social media team, who fielded all messages in character. A few lucky early respondents were able to rent the room via Airbnb for only $10 a night.

The campaign was a massive success for the Art Institute, leading to the museum's largest daily exhibition attendance in 15 years, and earning them national media attention. 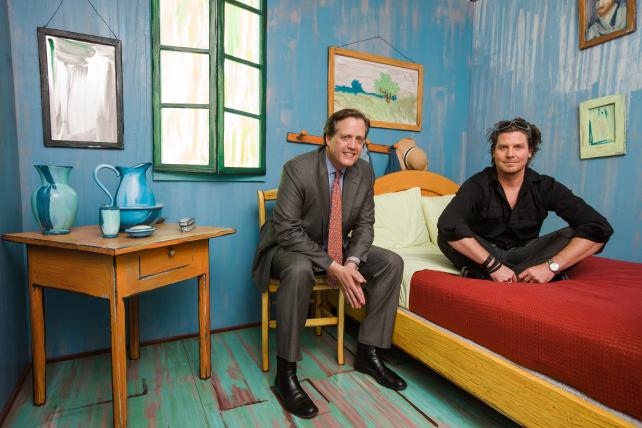 Tiger Beer -- an American-owned company that operates out of Singapore -- wanted to find a way to turn air pollution into something useful and positive. Enter the talented team at Graviky Labs, who devised a scientific process to capture pollution and transform it into Air-Ink -- a fluid black paint. The brand then worked with Australian agency Marcel Sydney to put the ink in the hands of influential street artists and film the results.

It turns out just 40-50 minutes of diesel car pollution can produce a rich shade of black ink, and artists were more than willing to incorporate the paint into their work for the project.

If you're a marketer, you've experienced the pain of sorting through seemingly endless pages of bad stock photos in search of one that just isn't too awful. To promote their new stock photo service Adobe Stock, Adobe partnered with Swedish agency Abby Priest to develop a tongue-in-cheek fashion line that features outdated, overused stock photos.

"Some stock images have earned their place in the history books," said Abby Priest’s Creative Director, Oskar Hellqvist, in a Q&A on Adobe's blog. "Classic motifs that have been overused and established as hilarious clichés, known, loved and/or hated by all ... Turning them into a limited edition clothing line is our way to salute them and an attempt to create something disruptive and unconventional in the genre."

You can see the full Adobe Stock Apparel lookbook here. 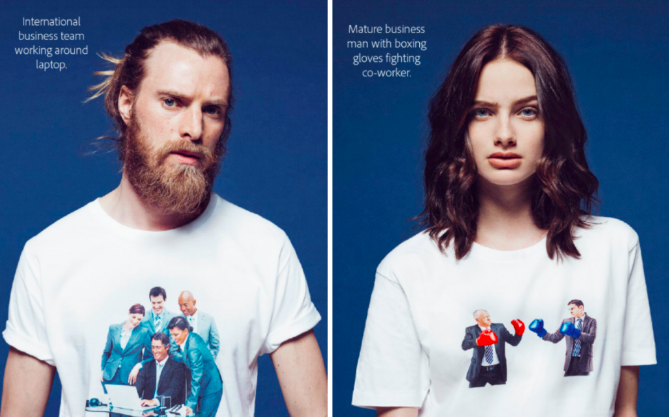 As part of a major advertising push in Latin America, Uber's in-house marketing team launched a guerrilla campaign in Mexico City, sending out a small army of drones equipped with cheeky signs promoting UberPOOL. Drivers were confronted with the small aircrafts and their mini-billboards while waiting in stagnant rush hour traffic.

Although they don't plan to replicate the stunt in other markets (since doing something similar in the U.S. or Europe would require some major bureaucratic hoop-jumping), the stunt gained significant earned media attention for the car service app. 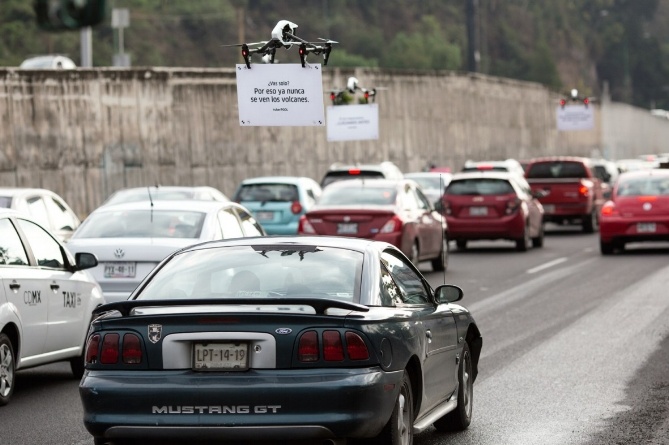 How do you get millennials interested in a classical radio station? This Twitter-powered metronome is a good start. Developed by agency Archer Malmo for Austin's classical music station KMFA-FM, this metronome ticks at a tempo determined by the number of Tweets sent in the Texan city.

"We want people to give KMFA a try -- it's not a stereotypical, stodgy classical music station," Archer Malmo executive creative director Matt Rand told AdWeek. "That audience happens to be younger and use Twitter more, so basing our 'heartbeat of the city' off Twitter volume is a fitting way to connect with them."

Most ads run for 30 seconds. This spot from Laphroaig Whiskey clocks in at three and a half hours -- and it was all filmed in a single take.

U.K. agency Multiply was behind the video, which features comedian Andy Daly reading real reviews of Laphroaig in a filibuster-style speech. Ranging from glowing to downright disgusted, the strongly worded and ultimately mixed reviews are intended to highlight the polarizing nature of Laphroaig -- you either love it, or you hate it. But the brand wants to hear about it.

To encourage consumers to make healthier choices while shopping for groceries, Lipton Green Tea partnered with agency Wunderman MENA to create a shopping cart that tracks your steps, calories burned, and time spent moving at the grocery store.

Aimed at people too busy for regular exercise, the cart is intended to show consumers how many calories they can burn just by walking around at the grocery store. The hope is that they'll also think twice about what they put in their shopping cart if they can see the calories they're burning in real time.

Burger King and McDonald's have always had a rivalry, and on Halloween 2016, the home of the Whopper played a prank on the Golden Arches.

A Burger King location in Queens, NY dressed up the entire restaurant as "The Ghost of McDonald's", sweeping a massive white ghost costume over the building and adding a saucy message to their sign: ""Booooooo! Just kidding, we still flame grill our burgers. Happy Halloween."

Although only one location participated in the spooky prank, Adweek revealed that it was a stunt pulled off by ad agency David Miami.

To drum up some buzz for their gourmet tortilla chip brand, Paqui released a fiery chip spiced with Carolina Reaper peppers -- the world's hottest variety according to Guinness World Records. The Carolina Reaper Madness chips are so dangerously spicy, they're packaged individually and sold for $4.99 each.

So why would you ever want to eat this thing? It's part of a challenge, naturally. Following in the footsteps of other viral internet food-based challenges -- like the cinnamon challenge, which never, ever ended badly for anyone -- Paqui's marketing team launched the #OneChipChallenge.

The premise is simple: eat the the Carolina Reaper Madness chip, post your reaction online. The brand offered prizes to select participants, including a year's supply of their less-spicy chips. 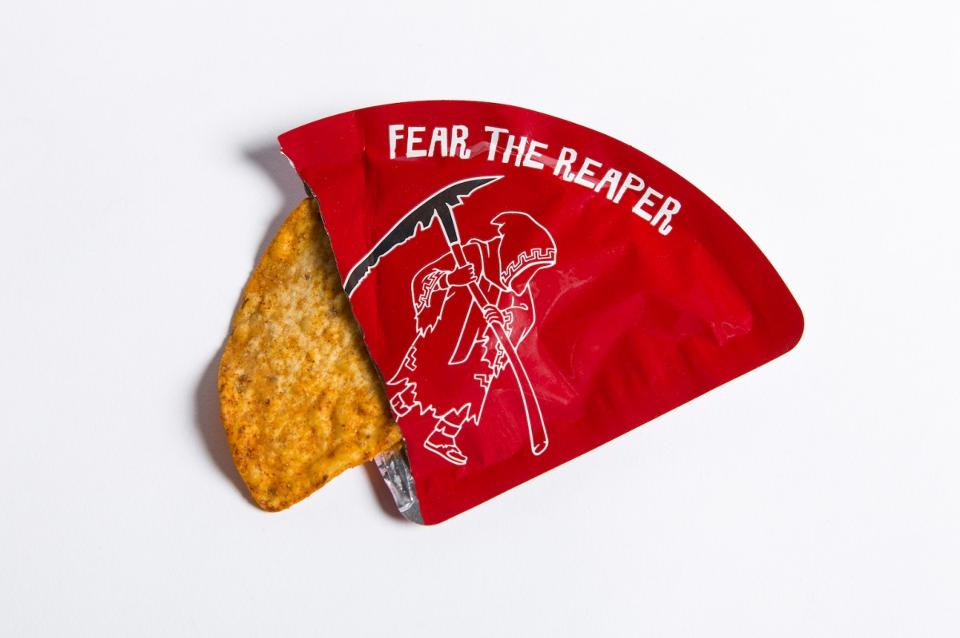 Add this one to the list of things no one ever asked for, but somebody made anyway: A virtual reality mask that lets you smell farts.

To promote the South Park video game, Ubisoft worked with agency Buzzman to concoct an odor that perfectly mimicked the smell of someone passing gas. It was actually a lot harder than you'd think. Buzzman consulted multiple chemists and perfumers to get the smell right, and worked with a team of software engineers and industrial designers to develop the VR nose mask. They named it -- what else? -- Nosulus Rift.

The mask (thankfully) isn't for sale, but Ubisoft uses it at promotional events to build hype for the South Park game, which features a particularly flatulent character. 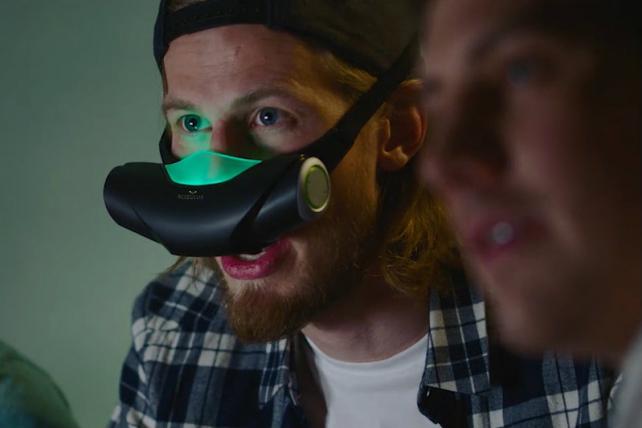 Have you ever looked at your shoes and thought, "Man, I really wish they had a phone charger and WiFi capabilities?" Virgin America has heard your very first world cries, and developed these almost comically tricked-out shoes to promote their first class flying experience.

California-based agency Eleven, Inc. designed these extravagant kicks over the course of eight months to mimic the look and feel of Virgin America's first class cabins. The final product includes mood lighting, WiFi, a USB phone charger, and a small video screen -- you know, in case you feel compelled to watch some Netflix on your shoes. 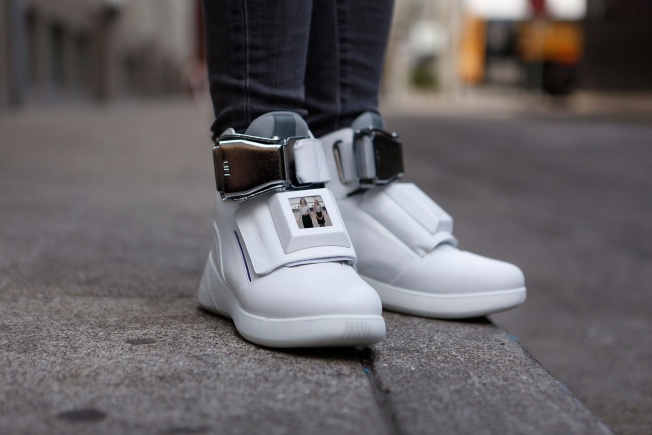 7 Inspiring Brand Activations to Help You Launch Your Own