When Is a Phone Call Better Than an Email? 6 Times When You Should Take It Offline

I don't know about you, but as a rule, I communicate better via written word.

It gives me time to think. It lets me use the vocabulary that my SAT tutor hammered into my brain so many years ago. And most of all, it gives me a screen to hide behind when I have to confront an uncomfortable topic -- making the situation much less awkward. But there are times when even I, the perpetual wordsmith, have to make an actual phone call.

Speaking to another human being over the phone can be nerve wracking. Maybe it's because so few of us actually use our mobile devices for that anymore -- after all, Pew Research found that text messaging is the most widely-used feature on them.

But even if it looks like phone calls are fading on the surface, there are times when they're still essential -- especially, it seems, where a sensitive subject is concerned. That means it's time to stop hiding behind the screen, take a deep breath, and dial. We've outlined six of the most important occasions when a phone call is better than an email. Have a look, and start talking.

6 Times a Phone Call Is Better Than an Email

1) When You Want to Apologize

Most of us grow up understanding that, when we do something wrong, we should say, “Sorry” -- 96% of parents think it’s important for kids to apologize when they deliberately upset someone, and 88% believe the same is true, even when it's unintentional. But what constitutes a heartfelt apology?

It’s so hard to admit when we’re wrong. And to actually say it out loud -- “I’m sorry” -- is even more challenging when we have the option of quickly typing it out in an email or text message. That’s why it can carry so much more weight when someone actually calls us to apologize. Assuming he or she means it, we can hear the person’s remorse.

But if you’re afraid of screwing up an apology when you try to do it off-script, you can still write it down before you make the call. That can help to give you an idea of what it is that you really want to say, and can mitigate the risk of stumbling your way through saying sorry. Just make sure it sounds natural -- an apology won’t seem very authentic if it sounds like you’re reading from a script.

2) When You Anticipate a Lot of Questions

My colleague, Leslie Ye, recently had a phone call with someone to discuss a project for the HubSpot Sales Blog. She specifically chose to have a spoken conversation -- rather than explain the parameters over email -- for a few reasons. Among them, she told me, was that she anticipated the writer would have several questions.

As it turns out, she was right. “Calls that have a lot of questions are typically harder to handle over email, because that’s not a real-time conversation,” Ye explained. “With a phone call you, can go back and forth on one question until it's clarified, then move on to the next one.”

In other words, it was more efficient for Ye and her counterpart to address all questions in a single phone call, rather than over a string of emails. When you do the latter, you risk losing track of what’s been asked and answered. But there’s a catch -- if you don’t take notes during your call, it’s just as easy to forget what you’ve discussed, given our declining attention span and retention of details.

For that reason, there are times when it’s a good idea to combine a phone call with an email. Following up in writing is a helpful way to ensure that both parties are on the same page after a conversation, and gives you a point of reference after the fact.

3) When You Have to Explain Something Complicated

There’s a reason why telephone support still exists. We use it here to help HubSpot customers, and for good reason -- 73% of customer service managers say that support inquiries are becoming more complex.

Written instructions are always helpful as a point of reference -- see above. But if you’re trying to follow a series of complicated steps, or you’re simply new to what you’re doing, it’s tremendously helpful to have someone walk you through it via spoken word.

As a channel consultant, my colleague Adrianne Ober deals with this phenomenon daily. “Email is great for getting to the point and keeping on task,” she says, but “a conversation is going to naturally provide deeper context.”

But while it’s great to be friendly, it’s also crucial to stay focused -- it can be easy for the conversation to go off-track, Ober says, especially when you strike a good rapport with the person you’re speaking with. So remind yourself of the purpose behind the conversation, and stick to it until the issue is resolved.

4) When You've Taken Way Too Long to Respond

It’s tough to say how many unread emails exist in the average person’s inbox. When I polled by team, just over 37% of my colleagues responded that they have anywhere between 11 to over 50. 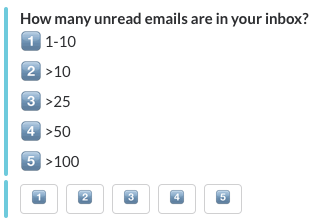 That explains why it’s so easy for emails to be overlooked or forgotten. Admit it -- how many times have you opened an email and marked it as “unread” with intention of answering it later? That habit makes it easy for messages to quickly become buried under constant incoming email.

There are two potential solutions to this issue:

Remember our advice to call when you need to apologize? Here’s a great example of when that’s particularly helpful. With inbox overload becoming a workplace epidemic, chances are, the person you’re calling will understand a little bit of neglect. Plus, making the effort to actually call the person and address the issue -- rather than responding with an overdue email that’s just going to flood his or her inbox, too -- speaks volumes. It sends the message that the person is a priority, rather than something at the bottom of endless to-do list.

5) When You Need to Discuss Something Personal

Simply put -- life happens, and sometimes, it’s not so awesome. And on occasion, the less-than-awesome things require us to temporarily step away from certain responsibilities, like work.

As we’ve emphasized, using the spoken word in lieu of email can help to make your counterpart feel like a priority, and to understand the significance of what you’re discussing. So when you need to bring up something personal, like a family emergency or medical issue, skip the email and have a real conversation about it instead.

That also helps to instill a sense of empathy. Not too long ago, researchers at the University of Michigan found that there was a 40% decrease in empathy among certain populations, which correlated with an increased use of technology. It’s a symptom of hiding behind a screen -- and, therefore, not being able to associate emotion with what’s being said.

That’s why we generally advise using the phone -- or an in-person conversation, if possible -- when you need to discuss anything important, as we note below.

6) When It's Really Important

What constitutes “urgent,” these days, has become somewhat fluid. We’re a deadline-oriented culture -- in fact, it’s been found that adding a deadline to a task makes us 24% more likely to do even get it done. But sometimes, we can’t pull off those deadlines alone. We need to interview an expert for a quote, or have an official party sign off on something.

But remember -- a lot of us have unread emails in the double digits. So when an important request comes in, even when labeled as “urgent,” it’s easy for it to get pushed down by a high rate of incoming emails. What’s urgent to me, might not be a priority for the person I’m trying to reach.

Sure, “most Americans would rather type it than say it,” writes Chicago Tribune’s Corilyn Shropshire. But reaching out by phone not only prevents an email from going unread -- and adding to the recipient’s email avalanche -- but also, it helps to instill that sense of empathy we mentioned before, and emphasize urgency.

Here’s another instance when following up in writing can help. If you can’t reach the person at his or her desk, for example, email might be received quicker, since 88% of us check it on our smartphones. Try sending a written summary of what you said in your voicemail, but save the meaty details for a phone call, so that they don’t get lost in the email shuffle, as per Ye’s above example. But be respectful of that person’s time, and ask when it would be more convenient to speak by phone -- that whole “empathy” thing goes both ways.

To be clear, we’re not trying to knock email. We love email -- there are times when it’s an invaluable resource for marketers, and when it’s a perfectly appropriate method of communication.

But we also like to keep a human element to things, which is why -- and feel free to call us “sentimental” -- sometimes, we like to talk it out. These are six instances in which that’s the way to go, and when it can help you accomplish things more effectively.

When do you opt for phone calls over emails? Let us know in the comments.

Sales And Support: Why Everyone On Your Team Should Have A Role In Both

Today I had the pleasure of being a guest lecturer in Professor Cusumano's Business of Software class on the topic of software sales over at Sloan. Professor Cusumano teaches what I believe to be the only MBA class in the country on the bus...