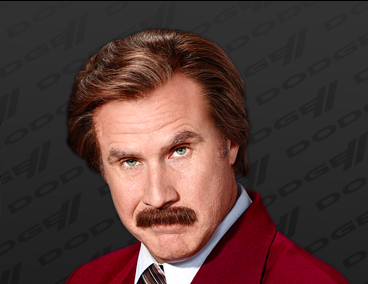 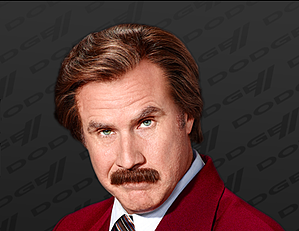 Will Ferrell and the producers of Anchorman 2: The Legend Continues pulled out all the stops creating a months-long marketing campaign for the movie. But did it work? As with a lot of things related to marketing, that's a tough question to answer. But the campaign has set a new benchmark for movie marketing, with a months-long campaign built around real-world experiences and pranks rather than billboards and trailers and TV commercials. If anything, Will Ferrell might at least be showing us how movies are going to be marketed from now on.

How big was the campaign? There were the Dodge Durango commercials, which were not just funny but also incredibly effective. There was Ferrell's appearance as an actual newscaster on a North Dakota TV station, and an arrival in Winnipeg to announce a curling tournament, and an appearance on ESPN interviewing Peyton Manning. There was an event at Emerson College in Boston, which named its School of Communications after Ron Burgundy, for one day.

There were videos on Funny or Die, the site Ferrell founded with his writing partner Adam McKay. There were underwear ads for Jockey. There was a mobile app, and a Ron Burgundy autobiography. There was an Anchorman exhibit at the Newseum in Washington, D.C. There was an appearance on the cover of Dog Fancy magazine. There's a Ben & Jerry's ice cream flavor called "Scotchy Scotch Scotch." Ron Burgundy appeared on Letterman, Conan, and Kimmel.

For months it was all Ron Burgundy, all the time, and there was so much going on that I began to worry -- was this an indication that the movie was going to be a stink bomb?

At first it seemed that might be the case, as the movie got off to a slow start, prompting the L.A. Times to wonder, "Anchorman 2 box office: what happened?"

That story, published on Dec. 23, pointed out that the movie's opening weekend box office of $26.8 million was less than the $28 million opening weekend for the original Anchorman flick from 2004.

Steven Zeitchik, writing for the Times, theorized that the marketing blitz had backfired, that Ferrell & Co. had oversaturated the market and "made people feel like they had gotten their fill of the character. Film fans really wanted to see a few more hours of Ferrell and friends getting into mischief. And thanks to all these appearances, they did so weeks ago."

But wait -- Ron Burgundy may have started slow, but he finished strong. By January the movie had done $119 million in U.S. box office, and another $40 million overseas, or just shy of $160 million, according to Box Office Mojo. That's pretty good, especially considering that the original Anchorman did $90 million, Box Office Mojo says.

What to make of this? Entertainment is a fickle business, and it can be difficult to determine how well a marketing campaign influenced ticket sales, says  David Deal, president of David J. Deal Consulting, in Chicago. Deal is a veteran marketing executive who frequently blogs about technology and entertainment.

He thinks the slow build indicates that the marketing blitz wasn't much of a factor. "Anchorman 2 opened poorly and then started to achieve better box office week after week, which suggests the massive marketing campaign had less impact than hoped," he says.

"Remember, all that clever marketing occurred before the movie came out. It was supposed to trigger a strong opening out of the gate, which it did not. My hypothesis is that the reviews from critics and moviegoers are the stronger factor in its rebound," Deal says.

He thinks good reviews and strong word of mouth may have had more effect than the marketing blitz. Another factor was that the new Hobbit movie opened the weekend before Anchorman and was still doing well, which no doubt hurt Anchorman's opening weekend.

Don't wear out your audience. The marketing campaign for the Anchorman movie ended up competing with the movie itself, Deal says.

Product, product, product. All the marketing in the world can't save or sell a bad product. But in this case the movie itself was good enough that people started telling friends about it, and so it built up over time.

The question I would ask is how well or how poorly would Anchorman have done without that enormous marketing campaign. It's obviously impossible to answer that, but my gut tells me that the marketing wasn't all in vain and that in fact that barrage of Burgundy did help.

Most sequels don't make nearly double what the original movie made, after all. In fact, Anchorman 2 was a risky project. It would have been very easy for the movie0 to come and go without making a blip, if only because it's the kind of movie that a lot of people (myself included) would put into the "I'll wait and watch it on iTunes" category. The marketing campaign made it feel more like an event, a happening -- the kind of thing you want to see in a cinema, with a big bunch of other people.

What's your take? Share your thoughts in the comments below.