Companies Are Getting Into the News Business. Here's How to Do It Right 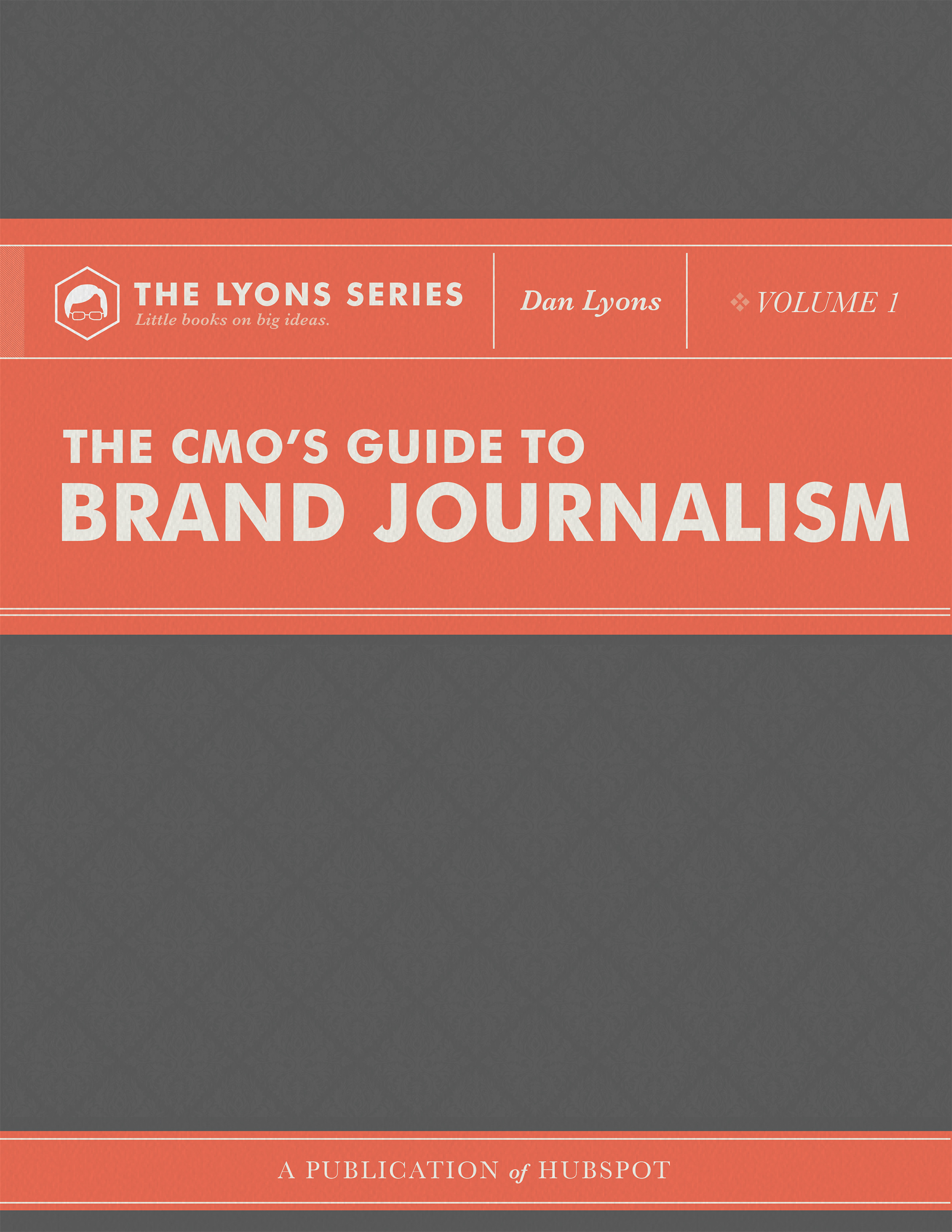 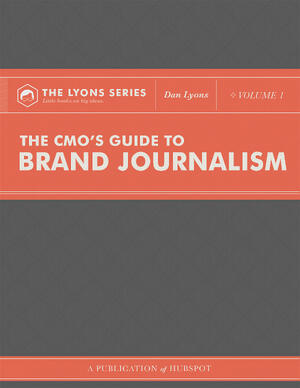 Just last April I wrote my first article for the HubSpot blog, titled, “Why I’ve Left the Media Business.” Now, 10 months later, I’ve written my first marketing ebook, and ironically enough the subject of the book is the media business. Actually what I’ve written is a guide to help companies emulate mainstream media organizations and build their own in-house news operations. The book, titled "The CMO's Guide to Brand Journalism," offers advice on how to structure a newsroom, provides case studies of corporate news operations, and explains best practices for any media organization to follow. If your company does any publishing at all, you'll want to download the ebook and check it out.

I made the jump from media because it seemed to me that advertising-supported news operations did not have a sustainable business model. And at the same time I could see corporate newsrooms popping up all over the place.

Nearly a year later, that trend is only gaining momentum, as companies across almost every industry are creating media operations. And while a lot of corporate media groups started out as fairly primitive operations, some have become really sophisticated. Qualcomm’s Spark site, run by former USA Today journalist Michelle Kessler, stands shoulder-to-shoulder with any tech blog out there. Microsoft’s Stories site, run by “chief storyteller” Steve Clayton, has been producing multimedia story packages that go beyond anything you’ll find in mainstream media, as I pointed out in a recent article on the HubSpot blog. Clayton's operation at Microsoft is one of the teams I write about in "The CMO's Guide to Brand Journalism."

I believe that the media business itself is being radically transformed, and that companies that used to be advertisers now are becoming publishers instead. I also believe that this transformation makes perfect sense, and that the business model of the media industry over the past half century has been something of a historical anomaly. The old model, the one that is dwindling, was created by scarcity and high barriers to entry.

In the old model, media was organized by geography and constrained by distribution. Every city had one or more newspapers, and each paper was supported by local companies that advertised in the paper. That model was wasteful and inefficient. Each advertiser wanted to reach only a tiny fraction of the overall audience but had to pay to buy ads that were shown to everyone. Those advertisers paid too much and got a poor return on their investment.

But this was the best we could do, simply because the barriers to entry in the media business were incredibly high. It cost a lot of money to start a newspaper, which required a printing press and a fleet of delivery trucks, or a TV station, which required studios, expensive cameras and satellite trucks. Media companies enjoyed a quasi-monopoly, and could charge high prices for advertisements. And for some this was a great business.

The internet has blown that all up. Today the barriers to entry in media are negligible. Anyone can be a publisher. So a new model is emerging, one that is far less costly and much more efficient. Instead of buying expensive ads and trying to reach a tiny percentage of an audience, companies can create their own “newspapers,” and TV studios. They can speak directly to their audiences.

That’s why today we’re seeing editorial talent flowing out of media companies and into corporate news operations. I'm one of the emigres -- my background includes jobs at daily newspapers followed by Forbes and Newsweek. All around me, I see former colleagues making the same journey.

And today we’re just getting started. Eventually the media landscape will be redrawn such that instead of having a relatively small number of newspapers, each supported by hundreds of advertisers, we will end up with hundreds or even thousands of “newspapers,” each supported by a single company. And some of these operations are going to be producing really great journalism. The new landscape will also contain new independent news organizations like First Look Media, created by eBay founder Pierre Omidyar.

This isn’t a zero sum game. Newspapers aren’t all going to die. Big brands like the New York Times and Wall Street Journal will survive. The media pie is getting bigger, not smaller. A decade from now I believe we will have more media than we do today, with greater diversity and a lot more choice.

What Is a Journalist?

I’m sometimes asked whether it’s really possible to be a journalist if you’re part of a corporate marketing department. I think it depends on how you define journalism. If you adhere to a strict definition of journalist as someone who writes for a media company like the New York Times or Newsweek, then obviously the answer is no. Writing for a corporate blog is not journalism, by that limited definition.

But what if you embrace a wider definition of the word “journalist,” one that encompasses many kinds of storytelling and goes beyond the confines of traditional mainstream media outlets? Is the lone blogger who makes money selling ads next to her posts a journalist? I think so. Same goes for the blogger who doesn’t make any money at all and just writes for the love it.

If you are creating media, and telling stories, and contributing to the conversation on any topic, then as I see it, you are a journalist. I can tell you that from my perspective, I approach my work at HubSpot the same way I did my work at Newsweek and Forbes. I’m looking for good stories, and I try to tell them in compelling ways. I want my work to be honest, and to entertain and inform.

It’s true that a journalist writing for a corporate marketing department has to deal with conflicts and constraints. But guess what? So do journalists in mainstream media. Can a reporter write a negative article about the person or company that owns her newspaper? In theory, yes, but in practice you may have noticed that this doesn’t happen very often.

A trickier situation arises when a reporter is working on a story that could upset an advertiser. In theory the advertising side of the newspaper should have no say in what the editorial side does. In reality things don’t always happen that way.

When you look at things this way, you see that brand journalism doesn’t seem all that different. What brands want is good storytelling, which is a skill that most good journalists possess. In terms of ethics, a corporate media person should aspire to the same goals as any reporter at any newspaper or magazine – to tell the truth, to be honest, to do good work.

The people who run Contently, a New York company that matches freelance journalists with corporate writing gigs, actually believe that people creating corporate content “should seek to adhere to stricter standards of reporting than traditional journalism."

I believe it is possible that someday, a corporate media initiative could evolve into a genuine, and genuinely great, media property. To be sure, most brands won’t do this. Most will make the most obvious mistake, and will fail to give their reporters true independence. Their work will lack credibility.

But some companies might dare to do the right thing. And if they do, great things can happen. I know that sounds nuts. But the media business is being massively disrupted and transformed, and these days it seems to me that almost anything is possible.

Consider this: a decade ago, who would have predicted that the Huffington Post would become bigger than the New York Times? Who would have guessed that Red Bull, an Austrian company that makes energy drinks, would create a standalone media company – Red Bull Media House – that today produces movies and TV shows, publishes a magazine with 4.8 million readers worldwide, and soon will become a profit center in its own right?

So who can say what the media business will look like a decade from now? Everything is changing. And everyone has a chance to be part of the transformation. It's an extremely exciting time to be working in corporate media. If you'd like to get involved, I urge you to download the ebook.

To learn more about building a newsroom inside your company, check out HubSpot's brand journalism guide.