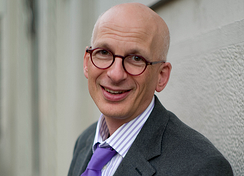 This column was written by Dan Lyons, executive editor of Up and to the Right. Follow Dan on Twitter here.

Lots of people are upset, or at least trying to be upset, about a recent policy change at Google whereby the search giant announced it will start using the names and photos of people who use Google+ in advertisements.

Most people are just freaked out and feel that Google’s new policy is kind of invasive and creepy, though their fears are perhaps assuaged by the fact that very few people seem to actually use Google+ or even know someone who does.

However, marketing guru Seth Godin sees something bigger at work here. Godin thinks Google's move is a sign that the search giant has “jumped the shark,” meaning it has reached a moment when its culture has changed for the worse and started on a downhill course. This is how hit shows fizzle, and how empires crumble.

The reference to “jumping the shark” refers to an episode of the 1970s TV show Happy Days, when the show, which was getting long in the tooth and desperate to shore up its sagging ratings, dreamed up a storyline in which Fonzie jumped over a shark on water skis.

As Godin sees it, the show’s mistake was “the chasing of ratings at the cost of its integrity.” In Google’s case, the sin is the “chasing of profit at the expense of the original mission.”

Public companies are under pressure from Wall Street to create ever more profit growth. To satisfy Wall Street, Godin says, companies hire a new kind of employee — the kind who can and will do whatever it takes to keep making those profit numbers go “up and to the right,” even if it means doing things that are bad for customers and run counter to the company’s core values.

In other words, customers are pitted against investors. And investors win.

The problem is that this is a short-term strategy and ends up undermining the company. “It’s not surprising,” Godin says, “but it’s sad.”

He also points out the irony here, which is that advertisers are constantly pushing Google (and Facebook, and all media companies for that matter) to let them splatter ads everywhere, to intrude on people in every possible way, and if people get annoyed, so what?

The problem is that advertisers are stupid, and the things they think they want will end up hurting users; and Google; and — here’s the irony — even the advertisers themselves.

Don’t tell that to advertisers, however. In my last job, I was editor of a tech media site, and a lot of my job involved dealing with advertisers. There was nothing they wouldn’t ask for. Or demand. Ethics? Forget about it. Smart business decisions? Long-term value? You must be kidding. As some media companies gave in to the advertisers and their agencies, the rest of us got pulled along — dragged down in a race to the bottom, even as we knew that all we were doing was destroying the value of our brand.

Advertisers often seem to want pitchmen spraying perfume at every person who walks into the store, inserts stuffed into every periodical, pop up ads, complete data on every individual they target and the ability to spam at will. Great media companies fight back on all of these intrusions, because they know that what actually works is genuine connection built around remarkable products and services.

Google’s business is booming these days. The company just turned in a barnburner third quarter, with revenue and earnings that beat Wall Street expectations. Google will do $60 billion in revenue this year. Its stock is soaring and just broke through $1,000 a share, up from $700 a year ago.

In other words, everything CEO Larry Page is doing seems to be working. Google’s revenues keep growing even though its average cost per click is dropping. Why? Because while the average price per click dropped 8%, the number of paid clicks grew 26%.

Not long ago, the shift to mobile was seen by some as a threat to Google. But Google seems to have cracked the code on mobile, in part by moving advertisers to integrated, multi-screen campaigns where they can advertise across desktops, tablets and smartphones.

So people are howling about having their names and photos used in ads on Google+. SEO guru Rand Fishkin howled that Google was abusing its monopoly position a couple weeks ago, when Google said it would start encrypting more searches, depriving marketers of keyword data.

But you know what? I don’t think Google cares. Not. One. Bit. Google is developing self-driving cars and Google Glass. Its core search business is stronger than ever. Android, its mobile operating system, has 80% market share worldwide. This is a company at the very top of its game.

Seth Godin might be making some good points. But I bet if you asked Larry Page, or anyone around him, what they thought about Seth Godin’s critique, they would probably say that they politely disagree.