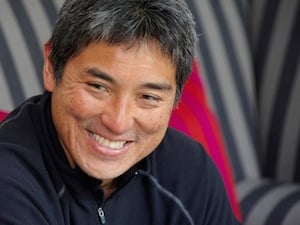 “At the highest level, the appeal is that the company is democratizing something – in this case design,” Kawasaki says. “I’m into democratization. Apple democratized computers. Google democratized information. Self-publishing democratized writing. Design is one of last big, undemocratized sectors.”

Last fall we wrote about Canva on the HubSpot blog, citing it as an example of a new breed of content creation tools. Kawasaki says the goal is "amazingly simple graphic design." To see how Canva works, check out this online tutorial. After that, if you want to give Canva a try, Kawasaki has set up a special $10 credit for "Friends of Guy," which you can access here.

Kawasaki says he learned about Canva because his pal Peg Fitzpatrick, “who helps me with all things social media,” told him about the tool. He started using it, and got hooked. Canva’s founders saw that Kawasaki was using the product and reached out, asking him if he’d like to get involved with the company.

"We’re thrilled to have Guy join our team and are looking forward to working with him to grow Canva globally," says Canva CEO Melanie Perkins. "Guy brings a wealth of experience and is one of the world’s most accomplished marketers. Together with his social media architect, Peg Fitzpatrick, Guy will be helping us spread Canva throughout the world."

Perkins co-founded Canva in 2012 with Cliff Obrecht, who is chief operating officer, and Cameron Adams, a former Google engineer who is Canva’s chief product officer. The company has raised $3 million from angel investors in Silicon Valley and has 20 employees.

Canva went public with its product in August 2013, and in less than a year more than 330,000 people have used Canva to create 1 million designs. "We've had an overwhelming response from marketers, bloggers and small businesses who have been able to create their own beautiful designs and marketing materials with Canva," Perkins says.

Kawasaki says he’ll be visiting Australia, where Canva is based, but he has no plans to move there. His role seems to involve doing a little bit of everything – using social media to spread the word about Canva, demoing the product, “helping cut biz dev deals,” and giving speeches. “In other words, this is a startup. I’ll do what has to be done,” Kawasaki says.

Kawasaki is best known for his years as an evangelist at Apple, and for his numerous books, including Enchantment, Reality Check and Rules for Revolutionaries.

Most recently, Kawasaki was consulting for Motorola, helping with the launch of the Moto X smartphone. He says this might be his last gig. “I’m almost 60,” he says. “I figure I have one more big roll of the dice in my professional life, and Canva is it.”