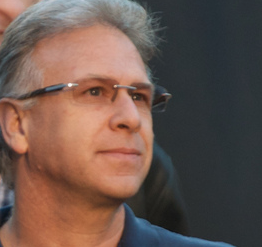 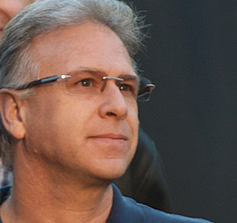 What does it take to be the world’s most influential marketer? You might guess that, first of all, you'd need to be all over Twitter and other social networks, spreading your message, identifying influencers and making connections, establishing yourself and/or your company as a "thought leader" in your space.

Well, not necessarily. In fact, the better route might be to say very little and choose your words carefully. Build suspense and mystery. When you do talk, keep the message simple and clean. Boil your product down to a single, easy-to-digest statement. Don’t talk about specs and features; talk about customers, and the problems your product can solve for them.

In other words, be Phil Schiller of Apple.

For the second year in a row, Schiller, the senior vice president of worldwide marketing at Apple, has been ranked the most influential marketer in the world, according to a new study commissioned by Forbes.

Worth noting: Of the top six spots, four are held by techies and two by people who work for car companies. Also worth noting: Phil Schiller has been on Twitter since 2008, and in all that time, he's posted a total of 198 tweets.

Here’s a link to a landing page where you can cough up some personal info and get a copy of the full report. And here’s a chart of the top 25 influencers: 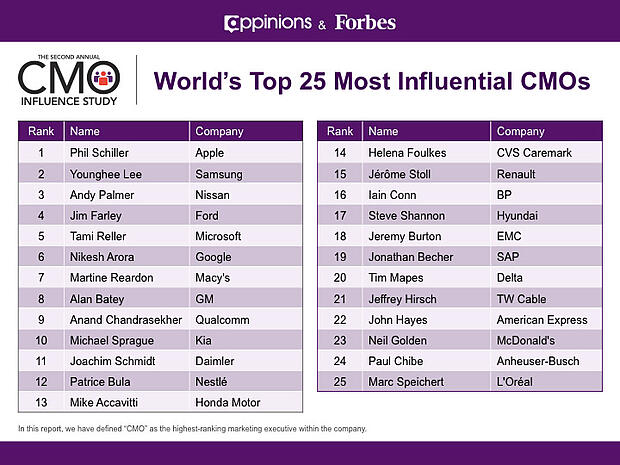 What Do You Need to Do to Win?

First of all, you don’t need to be a CMO. A lot of these people, Schiller included, don’t actually carry the title of Chief Marketing Officer. The study just uses “CMO” to mean the top-ranking marketing person at any company. Appinions surveyed the top 500 companies on the Forbes Global 2000 list.

Another thing you don’t need to do is throw money around. The study was trying to measure influence, and according to Forbes, there was “little correlation, if any, between ad expenditures and CMO influence.” For example, Apple spent $685 million on advertising in 2012, according to Kantar Media, while L’Oreal spent $1.6 billion on ads, but L'Oreal's CMO finished in 25th place in terms of influence.

But what is influence, and how do you measure it?

Let’s accept that it’s tricky business at best. According to Forbes, the researchers are measuring things like how often a marketer’s opinions show up in the media and the prominence of the people who share that marketer’s opinions.

For example, at the launch of the iPhone 5S, Schiller called it “the most forward-thinking smartphone in the world, delivering desktop class architecture in the palm of your hand.” That statement ended up being quoted all over the place, including top outlets like the Wall Street Journal and USA Today.

Of course, Schiller's situation is a bit unique. He has the good fortune to be running marketing at a company that makes really great products in a sexy product category. He also has a loyal Apple fan base that hangs on his every word and rabidly shares every Apple announcement on social networks. Apple also has a pack of dedicated journalists and bloggers who live-blog all of its events and review its products with religious intensity.

But where Schiller really excels is in boiling down the description of a product into a simple statement that really resonates — and then just repeating that simple statement, over and over again, to hammer it home. Schiller doesn’t roll out a laundry list of features and slogans and spec sheets — no. He provides one thing. And everyone repeats it, because it’s all they have.

He also had the benefit of two decades spent studying with a master of marketing: Steve Jobs.

How active should you be on social networks like Twitter? This has been a heated issue among CMOs, and it is something the CMO Influence Study tries to examine. Some marketers are all about building their personal brand and engaging in conversations externally. They’re the ones blasting out a dozen tweets a day.

Others don’t use Twitter much, if at all, and (I suspect) view the tweeters as a bunch of showboaters who apparently don’t have much work to do since they spend all their time screwing around on Twitter. The tweeters, on the other hand, would say that being on Twitter is their job.

For what it’s worth, a quick glance at Phil Schiller’s Twitter feed shows him to be a regular but not constant tweeter. Four tweets a month appears to be his max, and he chooses his shots carefully. Despite his 198 tweets over five years, Schiller had 106,171 followers at the time of this writing.

Also, for what it’s worth: Steve Jobs, who was probably the most influential marketer on the planet, was not the kind of guy who would spend all day sharing his thoughts on Twitter. His power came from what he held in reserve.

Despite the successes of Schiller, a word of warning to those who are avoid Twitter and focus on internal thought leadership rather than playing an external role: Forbes points out that in some companies, there are people at lower levels who get a higher “influencer” ranking than their CMO bosses.

At Honda, the most influential marketer is Alicia Jones, who is manager of social media. Top dog Michael Accavitti, the company’s “CMO equivalent,” ranks as the sixth most influential person at Honda.

Should Accavitti be scared? Maybe just a little. Only time -- and perhaps a few tweets -- will tell.

What do you think? Should CMOs be spending all their time on social media? Does Phil Schiller have an unfair advantage because he works at Apple, the coolest company in the world? Let us know in the comments.

Chart by Appinions via Forbes.

Photo of Phil Schiller by Mike Deerkoski, via Creative Commons.