Supposedly This Samsung Spot Is the Best Smartphone Ad Ever 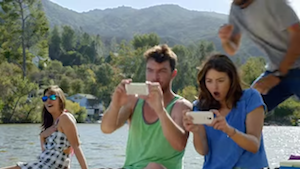 Samsung has made a huge advertising push around mobile phones in the past couple of years, which has paid off in ever-increasing market share. It's not just that Samsung spends a lot of money plastering its ads all over the place -- but also, the ads are really good. In fact, the new commercial for the Samsung S5 smartphone is the best mobile phone ad ever made, says research firm Ace Metrix, in Mountain View, Calif.

"Samsung has few peers when it comes to product demonstration advertising," says Jonathan Symonds, executive vice president of marketing at Ace Metrix. "Their ability to weave together a compelling storyline with jaw-dropping functionality has been their calling card in their emergence as an iconic advertiser."

Since 2010, Ace Metrix has measured the effectiveness of 33,000 ads across 96 categories. Few have ever scored as well as this new Samsung commercial.

Ace Metrix bases its results on a survey of 500 people who are "representative of the U.S. TV viewing audience." They maeasure effectiveness across six components: Desire, Relevance, Information, Likeability, Attention and Change. The highest possible score is 950.

The Samsung ad scored above 700 on all six component measurements, which is “an extremely rare feat,” Symonds says. In the Information category the ad scored 762. "Many product features are cleverly demonstrated in real-world, relatable scenarios, which drives both the Information and Relevance scores up," Symonds says.

The spot runs only 60 seconds, but manages to pack a lot of information into that limited space, including:

2. Camera stats. The camera has twice the resolution of the iPhone, can enhance photos before taking a shot and change the focus after you shoot.

3. S Health. There’s an app that lets you manage your health, and it works with a smartwatch, which is shown in the ad.

4. It’s water resistant. You can spill water on it, sit by the pool, or even rinse it under a tap.

Samsung has leapt to the top of the pack among smartphone makers. The most recent data from IDC shows Samsung now has 30% market share, twice that of Apple.

Everything’s Better has received 4.6 million views since being posted on April 24, just a week ago. Check it out and see what you think:

For the sake of comparison, check out Apple’s FaceTime commercial from 2010, which had no data, no specs, and no words at all – just a Louis Armstrong song:

Which one do you prefer? Does the Samsung ad make you want to buy a Galaxy S5 phone? Let me know in the comments.