Scoble: Google Is Starting to Remind Me of Microsoft 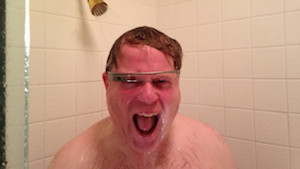 It’s been a bumpy few weeks at Google. First the search giant missed on earnings and the stock took a hit. Then Business Insider said Google is weak in search and weak in mobile. Then the guy who runs marketing for Google Glass found himself fending off a blast of bad publicity from people like Robert Scoble (once a huge evangelist for Glass) who say Google has done a lousy job of launching the product. Then Shishir Mehrotra, the number 2 guy at YouTube, quit or was pushed out in a shakeup under a new boss. And today comes the biggest and most worrisome news, that the exec who runs Google+, a much beloved seven-year veteran of the company, Vic Gundotra, is leaving.

What else could go wrong? Will one of Google’s self-driving cars going to fly off a cliff on the Pacific Coast Highway? Will Andy Rubin’s robots go on a rampage and start wrecking the espresso machines in Google’s fancy kitchens?

A Google spokesperson says Gundotra’s leaving does not reflect any disappointment about the performance of Google+, and that “this is really Vic’s decision.” In his farewell note, Gundotra said he’s heading off on “a new journey,” but that “this isn’t the day to talk about that.”

That has set off a guessing game as to where he will end up. Probably we’ll find out soon.

"Vic was the main man at Google+. The community will miss him dearly," said marketing legend Guy Kawasaki, who has been one of the biggest users and proponents of Google's social network.

I can't help but think that Gundotra’s departure is not good news for Google. Among his many other talents, Gundotra is the only top executive at Google who can get up on a stage and actually give a speech. I don’t want make too much of that skill, but it should not be underestimated, either.

If you're running one of the biggest and most important companies on the planet, especially one that a lot people view as a kind of techno-Sauron, you might want to have at least one person who can get up on a stage and look reasonably human and friendly.

For years now that has been Gundotra. He's smart, affable, a natty dresser, fond of sweaters, a little bit nerdy -- an ideal front man for Google. Not an accurate personifcation, perhaps. But aspirational, as they say.

Before joining Google, Gundotra was a general manager of platform evangelism at Microsoft. He went to Google in 2007. He started the I/O conference, which has become a huge deal. For a time he oversaw mobile applications.

But his biggest project was the launch, in 2011, of Google+, Google’s response to the rise of Facebook.

It's been a mixed bag. Google claims to have 540 million monthly active users on Google+, about half as many as Facebook has. But – how should I put this? Those numbers are cooked. Google counts all sorts of people who touched any of its services, from Gmail to YouTube.

The reality is that Google+ got some buzz and excitement in the early days, in part because of its design, which was revolutionary at the time. But Facebook quickly copied aspects of the Google+ design, and mitigated that perceived advantage. And the site has lost momentum.

“Facebook is gaining steam and Google+ is not,” said Robert Scoble, a well-known blogger and startup liaison officer at Rackspace. Scoble at one time was one of the loudests proponent of Google+, citing its advantages over Facebook.

I was surprised when I talked to him recently and he told me he’d kind of fallen out of love with the service.

“The novelty has worn off,” he said. “The community is just not as good as on Facebook or Twitter. It’s just not as good. I’ve moved a lot of my everyday behavior over to Facebook, because I saw Facebook becoming more important.”

Scoble thinks the world of Gundotra. In fact Gundotra is the one who hired Scoble at Microsoft back in 2003. In the past few years, Gundotra “helped consolidate Google around Google+ and had a deep impact on the company as one of its main strategists and pitch men,” Scoble said.

But Scoble said he has become disappointed with what Google has done (or rather, not done) with Google+.

“They’re not community people. They don’t have a lot of people who are really social behavior people. It’s not a social place. Larry (Page) and Sergey (Brin) and Eric (Schmidt) missed social, and they still don’t get it. They still don’t participate in it. They don’t see the nuances that make a good community. It’s never been part of their DNA. It’s not something they care about. That’s the heart of it.”

Google+ isn’t the only letdown. Scoble says Google Glass hasn’t turned out to be as wonderful as he once thought it was going to be either. Scoble was one of the first adopters of Glass. Last April he was so enthusiastic about the product that he vowed, “I will never live a day of my life from now on without it (or a competitor). It’s that significant.”

One year later, “I’m not wearing them as much,” he said. “They just really do frustrate me now. You can’t put more than 20 contacts into it. So that makes the phone part of it useless to me. When you try to get directions it mis-hears you. You ask for 500 First Street and it goes, Five-Oh-One Street. And there’s no way to correct it, so then you have to pull out your phone and use your phone. There’s so many little things that drive me nuts about Glass.”

Scoble says Google has done a poor job of rolling out the product, and isn’t providing outsiders with enough information. Developers want to write apps for Glass, but Google won’t give them any guidance or tell them when the product will ship or what it will cost. “The developers are all getting hung out to dry,” Scoble said.

Without apps, Glass “just does not have a huge amount of utility. It has little utility. You can take pictures. You can get directions. But there’s no distribution method for developers. There’s no app store. I don’t know what the hell is going on over there. It’s like, `Dudes, what is going on?’”

A similar lack of action is what hampered Google+. “The same type of behavior is what drives me nuts about Google+. If they just changed a few things this would be a great place to come every morning. It just drives me nuts," Scoble said.

Scoble also made a scary comparison. He said Google is starting to remind him of Microsoft, a place where he worked for three years.

“Microsoft is not able to fix problems because of its internal politics, and Google feels like that to me now. Google could be such an interesting company, and it is trying to be. But if you can’t finish the product and make it good, it hampers our belief that you can be really innovative.”

Perhaps Gundotra started noticing the same thing, and decided it was time to find greener pastures.

Believe it or not, Google is nearly 20 years old. Though the company was officially incorporated in 1998, it began with a research project that Brin and Page launched in 1996. Sales last year were nearly $60 billion. It is hard to stay nimble when you’re that big.

Even now, almost all of Google's revenues still come from its original business of advertising related to search. The company for years has been scrambling to create a second act. First there was YouTube, and Android, and Google+. More recently there's Nest, and Google Glass, and self-driving cars, and a bunch of robotics and AI companies, and somewhere out in some lab wacky old Ray Kurzweil is doing whatever it is that wacky old Ray Kurzweil does. In some other lab a bunch of scientists are working on Google's Project Calico, whose aim is to defeat death itself.

Seriously, what the hell is going on out in Mountain View? Google is starting to look like some giant science fair. "It's not even clear that Google knows what it's doing," one roboticist told me recently. "They're just placing bets on potentially key technologies. It looks like a game of technology moneyball."

In that sense, it might be that Google doesn’t resemble Microsoft, as much as it does one of Microsoft's co-founders -- Paul Allen. Like Allen, Google has become the middle-aged rich guy who has too much money and no idea what to do with it, so he just buys everything.

But who knows? Maybe Larry Page and Sergey Brin aren't just throwing money around. Maybe they really do have some amazing secet master plan that is going to tie all these products and acquisitions together. Let’s hope so.