You're Being Watched: New Tech Turns Store Shelves into Stalkers 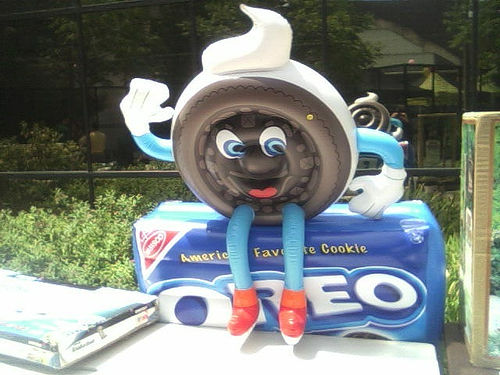 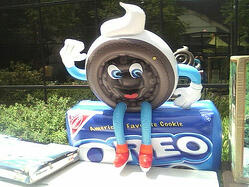 You know that secret obsession with snacking on a fist-full of Oreos at bedtime? It might not be so secret after all. In a move that might strike some as marketing brilliance and others as a privacy invasion rivaling the NSA's data collection activities, Mondelez International, the parent company of snack brand favorites like Oreo, Ritz Cracker, and Wheat Thins, is developing so-called "smart shelves" that watch you as you're shopping.

The technology will help the food giant and its retail partners better target advertising based on consumer behavior in the store.

Similar to how internet cookies and other techniques help online retailers collect data on customer behavior and buying patterns, these so-called smart shelves will serve up real-time data that can be tapped to create targeted ads and offers based on a specific customer's shopping experience.

Whether you buy the Oreos or put them back on the shelf out of guilt, it doesn't really matter. The whole point is to give Mondelez real-time insight into customer behavior to get a better understanding of what and how consumers want to buy, while also allowing Mondelez to influence the purchase decision.

That might sound freaky, or creepy, but in fact these tactics are pretty standard in today's ecommerce world. Online customers pretty much recognize that every time they browse a website or make a purchase, all that data is tracked and eventually sliced and diced to help companies create targeted offers and, ultimately, sell more stuff.

Sometimes it's a royal pain in the you-know-what, but other times it's helpful when a product you might not have considered or an offer you might be open to magically comes your way.

Mondelez's smart shelf project is an attempt to level the playing field and give brick-and-mortar retailers a comparable level of  customer behavior tracking. In lieu of special code like Internet cookies, the underpinnings of Mondelez's Smart Shelf project are sensors and motion-tracking technology provided by Microsoft Kinect.

Aisles that stock Mondelez brands like Triscuit or Oreo would be outfitted with sensors, and in concert with Kinect for Windows, the system would report back in real time tidbits like the age and gender of consumers walking the aisles or which specific people are most likely to purchase certain items.

The data from the sensors on the shelves can also play a role in helping retailers know when it's time to reorder and restock certain products. After all, it's about keeping product moving.

It's not just Mondelez that's into this customer tracking stuff. Nordstrom, for example, experimented with a project to track customer movements by following the WiFi signals generated from smart phones, but they eventually killed the effort when customers complained.

American Apparel uses data from video surveillance cameras to plan staffing based on store traffic and is working on more experimental applications like using heat maps to chart how customers move around a store and to identify repeat customers.

Almax, an Italian company, has what perhaps is the creepiest addition to the let's-spy-on-the-customer mix: The EyeSee Mannequin, which buries both cameras and microphones in those already sketchy store mannequins to report back on shopper behavior.

With smartphones becoming everyone's most important accessory, and with the Internet of Things calling for sensors to be dropped into everything from common household appliances to clothing, there soon will be no escaping this kind of consumer surveillance.

The Age of Context

Products like Google Glass, the Samsung Galaxy Gear watch, and Apple's reported iWatch are all part of a technology sea change that has the potential to profoundly impact the world of marketing, according to pundits like Robert Scoble and Shel Israel, who co-authored the book The Age of Context: How it Will Change Your Work and Life.

"Five converging technology forces--mobile, social media, data, sensors, and location--are creating a huge contextual superforce in which technology becomes far more personal and capable of predicting what we want even before we ask," Israel said in a Q&A with HubSpot's Dan Lyons.

"Advertisers are in a cold war with the people they are trying to reach," he explained. "They make TV ads noisier -- we invent the mute button. They stick in more ads -- we get a fast forward button. This isn't the way to build a trusted relationship."

In my opinion, knowing that Mondelez (or any other retailer, for that matter) can peer into my late-night Oreo binging doesn't particularly inspire trust or make me feel warm and fuzzy towards the company. But I suppose getting a two-for-one coupon prior to checkout might make me feel a bit less guilty about the Oreos—at least from the standpoint of my skyrocketing grocery bill.