That Buffoon Ron Burgundy Sure Can Sell Cars 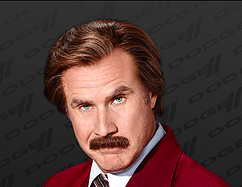 Say what you will about Ron Burgundy. He may be an idiot, but the guy can sell. Dodge says sales of its 2014 Durango SUV jumped 59% in October, after the company started running a series of somewhat insane commercials featuring Ron Burgundy, the witless 1970s newscaster character played by comedian Will Ferrell.

The spots are doing double duty, as they’re promoting both the Dodge Durango and the upcoming Anchorman 2 movie, which opens in December.

There are more ads to come, as apparently Ferrell taped 70 spots for Dodge, according to Jalopnik. Some are Vines, and some are just for YouTube, and some will run on TV.

They’re so good that Huffington Post says they will “break your brain.” A site called Warming Glow recommends you bookmark Dodge’s YouTube channel to catch the new ones as they’re released: “Would you look at that? I just suggested you bookmark a corporate YouTube channel so you can watch Dodge Durango commercials,” writes Danger Guerrero, which may or may not be Ron Burgundy writing under an assumed name.

Real or not, that sentiment must be music to the ears of the people who handle marketing at Dodge. The campaign has caught the attention of Time, Bloomberg, CNN,, and many others.

In other words, someone is getting a promotion out of this.

For what it’s worth, here is the YouTube channel to bookmark, with the slogan, “Durango. Burgundy. It’s Kind Of A Big Deal.” One video has received more than 2 million views, and a few others have topped 1 million.

Here are some of the most popular -- and most priceless -- Ron Burgundy spots: