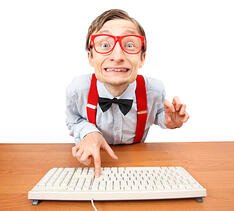 Why even bother with these people? Wouldn’t your company be better off just dropping them?

Actually, maybe not. Because it turns out there might actually be a lot of hidden value in those low-value customers.

That, at least, is what Dharmesh Shah thinks, and he’s worth listening to, as he’s been a successful entrepreneur, angel investor and author. He’s also a co-founder of HubSpot, as well as our chief technical officer, and a guy who indulges in some unconventional corporate behavior, like bringing a teddy bear to management meetings. (Check out the link. I'm not making that up.)

As they might say at Apple, Shah is a guy who “thinks different.”

In a recent post on Quora, Shah lays out the case for hanging on to low-value customers and entry-level pricing plans.

That model has been around for more than a decade – Salesforce.com, founded in 1999, was a pioneer in the space – and there’s even a “new cloud stack” of software aimed at the enterprise.

But in many ways the world of the cloud is still a new one, and companies in the space are still trying to figure out what works and what doesn’t.

Which brings us to the question that Shah was addressing on Quora, which was from an entrepreneur who said that two out of five of his customers are on the company’s lowest-priced plan. These customers represent 40% of the customer count but only 10% of the company’s monthly recurring revenue.

Worse, most don’t upgrade to higher-priced plans. And there’s a lot of “churn” – meaning they tend to come and go rather than sticking around for years and becoming loyal customers.

The entrepreneur’s question: “Should I keep this (low-cost) plan to grow my customers count, or scrap it?”

Churn is bad in every business, but in cloud software it’s especially deadly. That’s because on the cloud, software companies actually start off losing money with each new customer.

In the world of bundled software, companies like Oracle get a big shot of money up front from a new customer in the form of a licensing fee, and then collect annual maintenance fees on top of that.

Cloud companies don’t work that way. They just sign you up and start collecting a monthly subscription fee. Depending on how much it costs to acquire each customer, it can take months or even years to start making money on a new customer.

So: If people sign up for your cheap plan and then bail out (churn) before you hit break-even with them, what’s the point?

Some on the Quora thread advised the entrepreneur to dump the low-tier plan. Sure, this might drive away 40% of her customers, but if those customers are only contributing 10% of revenues, who cares?

Plus, it’s a way to separate the wheat from the chaff. The good customers will stick around and upgrade to a more expensive plan, and the churners will bail. Maybe it’s better to identify the churners quickly and get rid of them, or so the thinking goes.

But Shah argues the opposite. As he sees it, there’s high value in those low-value customers, for several reasons.

YOU'RE BUILDING A MOAT. If someone is going to try to enter your space and compete against you, they’re probably going to attack from below with a low-price plan of their own. If you keep your low-price plan, you’ve got their potential customers locked up.

THE PUFFERFISH PLOY. You know those fish that can blow themselves up to look bigger than they really are, so they scare off predators? Those cheapskate customers are doing the same thing for you. They may not generate much cash, but they boost your customer count. Looking big can help when you’re trying to convince other software companies to partner with you, and when you’re trying to recruit developers.

MAKING FRIENDS IN LOW PLACES. The people working inside those random companies that are using your low-price plan aren’t going to stay at those companies forever. They’re going to move to other companies. If they like your software, they may become customers at their new shop. And the new shop may have enough money to pony up for your expensive plan. In other words, you’re using that low-price plan the way some companies use “freemium” plans – as a way to get exposure to lots of potential new customers.

If you’re interested in SaaS business models, it’s probably worth checking out the whole thread on Quora. There are lots of ways to make money with a SaaS model. Some of them, including “multi-axis pricing,” are touched upon by others.

No matter what business you're in, consider that some of those customers you think of as "low-value" might actually be worth more than you think.