Not many companies ever get to be worth $1 billion or more, but the ones that do have a few things in common, it turns out. That includes a team of well-educated co-founders who are in their 30s and have worked together before, with at least one who has successfully started a company before.

San Francisco is a good location, and you need not worry too much about including women as co-founders or having any diversity at all for that matter. You’ll have to be patient, and expect to wait seven years for a “liquidity event,” meaning an IPO or an acquisition.

Those are some of the conclusions reached in this article published on TechCrunch by Aileen Lee, a venture capitalist and founder of Cowboy Ventures.

Lee’s team at Cowboy Ventures studied tech companies formed since 2003 and made a list of the ones that have been valued at $1 billion or more. Lee calls these companies “unicorns,” because "to us, it means something extremely rare, and magical." She tried to find out what they have in common. 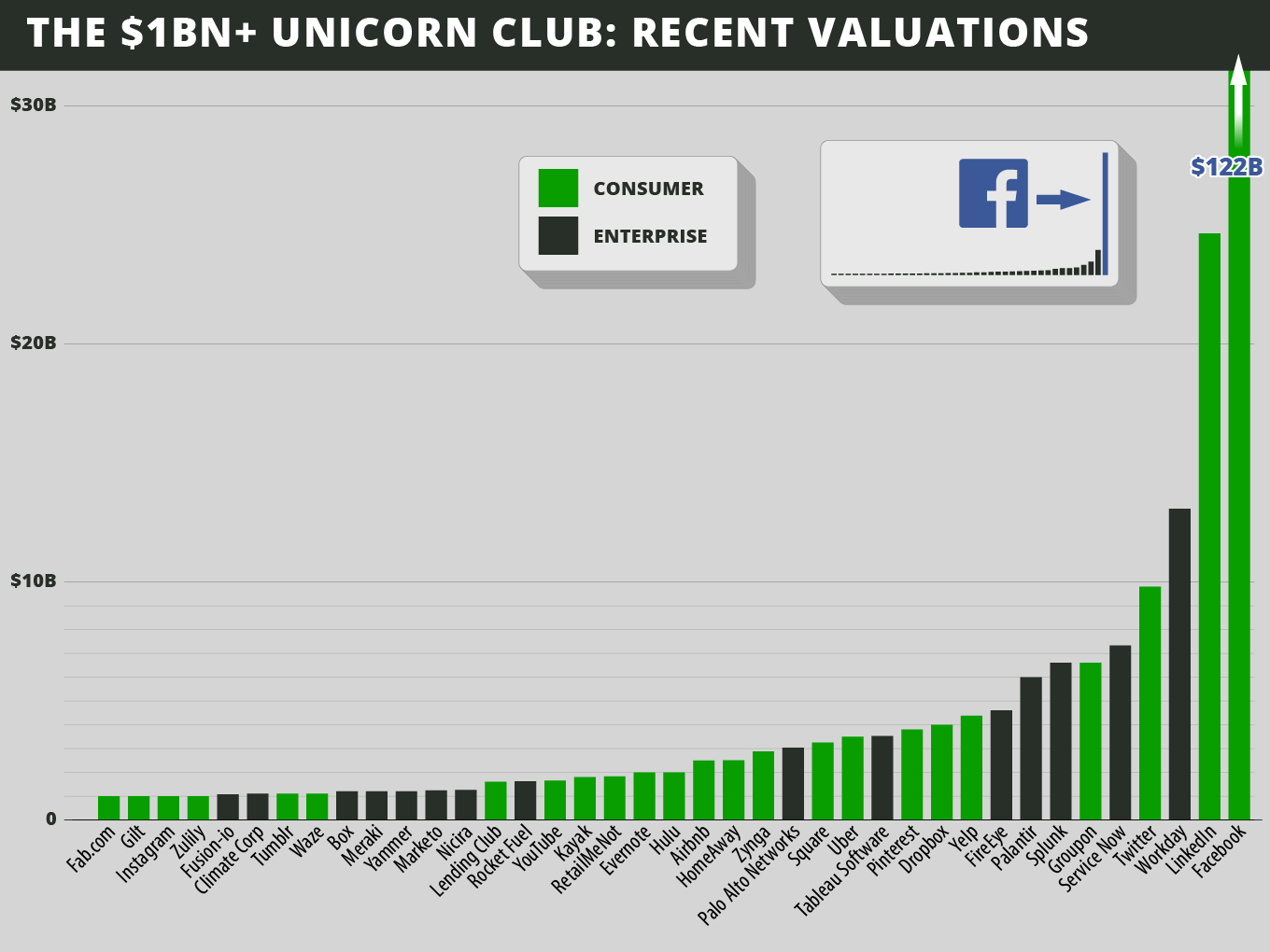 How Did They Do It?

First up, the odds of getting into the Unicorn Club are really, really small. Lee figures there were about 60,000 internet companies formed in the past decade, and of those, only 39 made it to $1 billion in valuation. That’s .07%, or 1 in 1,538 companies.

“The tech news may make it seem like there’s a winner being born every minute — but the reality is, the odds are somewhere between catching a foul ball at an MLB game and being struck by lightning in one’s lifetime,” Lee writes.

Facebook is what Lee calls a “super-unicorn.” Its market value is so big that it is nearly half the total of the entire list.

Every decade gives birth to super-unicorns. In retrospect it’s easy to see how they happened, as they all rode the big wave of that era. The 1960s was the decade of the semiconductor, and gave birth to Intel. In the 1970s the PC was born, and so was Apple. The 1980s were about networking, and Cisco is the poster child. The 1990s were about the modern internet, and gave rise to Google and Amazon. And the 2000s were all about social networks, which is why Facebook, Twitter and LinkedIn rank near the top of the companies from the past 10 years.

Consumer-facing companies have been the big deal in the past decade. But lately investors have turned away from the consumer space and are more interested in enterprise.

Enterprise companies deliver more bang for the buck. They end up costing less to start and being worth a higher multiple to the money that was invested. (To be sure, that statistic is thrown off by enterprise companies like Nicira, which was acquired for $1.3 billion while it was still young and hadn't raised a huge amount of venture money.)

The 20-something kid founder is an anomaly. Youngsters like Mark Zuckerberg of Facebook, or Tumblr founder David Karp, get lots of attention. But most companies are founded by people in their 30s. At Workday, which ranks third among the unicorns, the founders were in their 50s. Go grays!

College dropouts are an anomaly too. Most unicorns were founded by people with technical backgrounds and degrees from top schools. So you know how Silicon Valley investor Peter Thiel is offering kids $100,000 to drop out of college and start companies? Dumb, dumb idea. Don't do it. Stay in school. Get a degree in engineering.

Go west, young entrepreneur. Of the 39 companies on the list, 27 are in the San Francisco Bay Area. An interesting side note is that most are up in the city itself, rather than down in Silicon Valley. A decade ago that would not have been the case.

Companies that “pivot” usually don’t make it to the big time. Only four unicorns started out in one business then changed to another — Groupon, Instagram, Pinterest and Fab.

Diversity? Not so much. Only two unicorns have female co-founders, and none has a female founding CEO. There’s some ethnic diversity, but not much.

Lee says the study doesn’t provide a blueprint for how to build a unicorn company or how to spot one to invest in. However:

“That said, it surprised us how much the unicorn club has in common. In some cases, 90 percent in common, such as enterprise founder/CEOs with technical degrees; companies with 2+ co-founders who worked or went to school together; companies whose founders had prior tech startup experience; and whose founders were in their 30s or older.”

Somewhere out there, right now, a unicorn is just starting out. The really fun game to play is to look at companies born this year, in 2013, and try to figure out which ones have unicorn DNA. Any guesses?