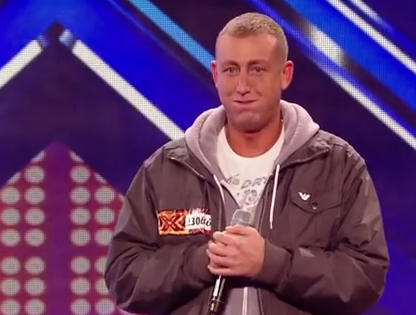 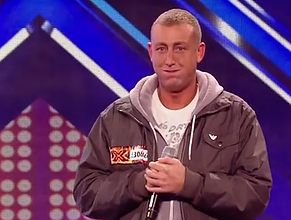 There are moments in life that can change everything. Moments that spark rising stars, inspire great leaders, and build remarkable companies.

When Christopher Maloney, a 34-year-old customer service advisor from Liverpool, England, took to the stage in front of thousands of people for X-Factor UK, he was about to experience one of those life-changing moments. But it was a moment that almost never happened.

With his hands trembling, Maloney could only settle his nerves with several deep breaths. Gasps so big he inhaled all the air around him and his cheeks expanded like a hamster storing food in its mouth. On the verge of tears, a serious case of stage-fright began to consume him.

"I'm really, really nervous," he admitted to the famous panel of judges. But then, the background music started and after some hesitation, he began to sing. Suddenly, Maloney gave a once worrying crowd goosebumps with this shocking and powerful performance:

Much like Susan Boyle's quick rise to fame after her 2009 Britain's Got Talent act, Maloney's experience is proof that anyone has what it takes to be remarkable. That video, put on YouTube in September, 2012, has been viewed more than 12 million times, and earlier this year Maloney put out a record.

But there's one thing that could have stopped Maloney from even performing in the first place: fear.

"I didn't realize how big the crowd was going to be. ... It took me five years to build to courage to apply. I downloaded the application form, filled it out, put it in an envelope, and then ripped it up every year," Maloney admitted during a post-performance interview with X-factor host Jeff Brazier.

It's a good thing that this year, his application actually went in the mail.

The One Thing That Holds Most of Us Back from Success

So was Christopher's experience on X-Factor staged or over-hyped with editing? Perhaps. After all, these "reality" shows are awfully good at that. Is he the best singer you've ever heard? Probably not, but that's your opinion.

What's remarkable about Chris is not just his ability to sing beautifully, but the fact that he conquered his biggest fear and went for it, in front of thousands of people, a handful of celebrities, and all the cameras. I don't know about you, but I find cameras very intimidating.

But most importantly, he applied. If he had decided that the application was going to yet again end up in the garbage, well, we wouldn't be talking about his story. Courage takes many forms and sometimes many steps (and missteps) to result in something great.

Christopher gives us the inspiration to embrace the one thing that often keeps us from our own success: our fears. Whatever it is that makes us afraid is what keeps professionals from becoming leaders, average companies into great companies, and ordinary people into remarkable people.

"Most of the things we avoid are avoided because we're afraid of being afraid." - Seth Godin [Tweet This Quote]

Rejection. Embarrassment. Criticism. Pain. Failure. All of these are possibilities when we step outside our comfort zone. Talent, skill, or knowledge, not matter how unique or great, is obsolete when it's not being shared with the world.

There are many books out there that talk about leadership, and several that provide case studies explaining the success of some of the world's best leaders and brands. They all have different theories, and all of them are probably right in some way shape or form, but the backbone to successful individuals and companies is courage. Call it what you want, but courage inspires action. Courage can change an industry, solve an economic crisis, or change someone's life.

Courage can mean challenging conventional wisdom, or doing what competition is not doing, or attempting to break a record, or risking going broke over a crazy idea. It can mean speaking in public, trying new things, challenging your boss, or starting a family. Courage is the ability to overcome something that frightens you.

Fear itself isn't a bad thing. Life without fear would be quite uninteresting, after all. At the other end of fear, once it's acknowledged, is reward and achievement. And maybe ice cream (I love ice cream).

"...artists and leaders seek out that feeling. They push themselves to the edge, to the place where the fear lives. By feeling it, by exposing themselves to the resistance, they become more alive and do work that they're most proud of."

That's why people like Maloney get onstage for the biggest performance of their lives despite an almost debilitating stage-fright. It's why Jeremy Lin, a point guard for the Houston Rockets, overcame unfair prejudices and stereotypes about an Asian-American basketball player and is now on the World's 100 Most Influential People: 2012 list.

Or why Steve Jobs, once fired from the company he founded, pushed through political barriers to build one of the most valuable companies in the world. And why Nelson Mandella, after serving over 27 years in prison, fought to tackle institutionalized racism, poverty and inequality in South Africa.

There are endless articles that preach the key to success is the willingness to fail. I agree with that. But there's also the willingness to be remarkable. To do either, you need to just go for it. I see so many people get hung up in their life or career because at some point they let fear get the best of them.

I'm hoping this story will inspire you to be more courageous or help others do the same, in any way that's important for you and those around you. All it takes it just one Christopher Maloney moment, no matter how big or how small. And when you do, just take a deep breath. Even if you look like a nervous hamster