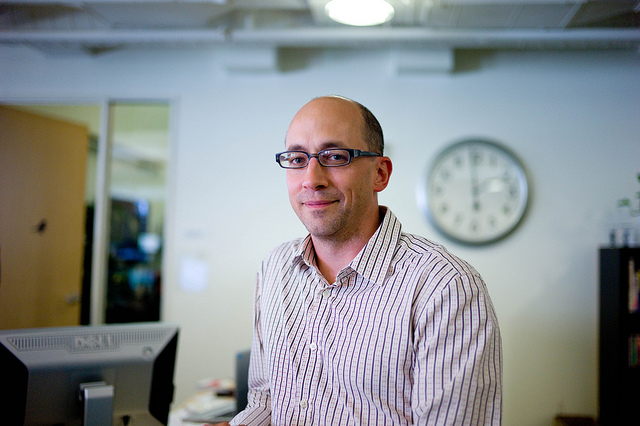 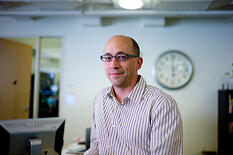 Shoot the messenger is an old tactic, but usually not a smart one. For proof, consider what's happening to Twitter CEO Dick Costolo, who thought he could wave off a critical story in the New York Times by zipping out a wisecrack that insulted one of the people quoted in the article.

Instead, Costolo has made things worse, and managed, with a nine-word tweet, to stir up a storm of bad publicity, right on the eve of Twitter's long-awaited and much-anticipated initial public stock offering.

Dude, what were you thinking?

The original story, by Claire Cain Miller in the Times, took Twitter to task for the lack of women in its highest ranks. Twitter’s directors are all white men. Its investors are all men. Among the corporate officers, only one is a woman, and she joined only five weeks ago.

Twitter recently filed for an IPO, hoping to raise $1 billion at a $13 billion valuation. The Times article suggests Twitter’s failure to appoint women to its board before going public proves that diversity isn’t a priority at the company.

The article also included a quote from Vivek Wadhwa, an academic and pundit in Silicon Valley who is writing a book about women in tech. Wadhwa said Twitter was demonstrating “elite arrogance” and “male chauvinistic thinking," and added: "The fact that they went to the IPO without a single woman on the board, how dare they?”

Now, here’s the thing. This story ran on a Saturday in the Times. A smart move might have been to just let the story slide by and say nothing.

But Costolo apparently could not resist taking a shot, and so he fired off a tweet: “Vivek Wadhwa is the Carrot Top of academic sources.” 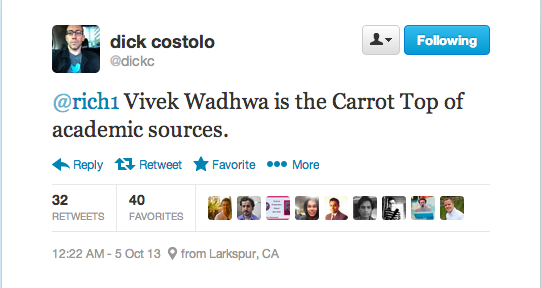 See the problem here? An important newspaper depicts a company as (basically) being run by a bunch of insensitive wiseass frat boys, and the CEO responds by behaving like … a wiseass frat boy.

“He proved my point for me,” Wadhwa says.

But Costolo made another PR mistake, and one that was far more profound -- he picked a fight with the wrong guy. Wadhwa is a combative person with a big megaphone. He's a regular contributor to a lot of top publications including the Washington Post and the Wall Street Journal.

Moreover, Wadhwa has a book to promote! He’s just finishing his book about women in tech. Now he gets to have a big, messy, public fight with a high-profile CEO in Silicon Valley, during the run-up to what will probably be the most publicized IPO of the year. Whoever is doing PR for Wadhwa's book is loving this -- just as much as whoever does PR for Twitter must wish it would all just go away.

Most important, Wadhwa is on the side of the angels here. He’s arguing for greater diversity. He's saying that companies should make a greater effort to hire women and give them a voice. How does anyone argue against that without looking like a chauvinist and a jerk? And who responds to that kind of criticism by making a joke?

As Wadhwa tells it, as soon as Costolo sent out the “Carrot Top” tweet, Wadhwa’s own Twitter feed lit up with people telling him about the wisecrack and defending him.

Wadhwa says he didn’t know Carrot Top. Someone had to explain to him that Costolo was insulting him by comparing him to a comedian who is generally considered to be, well, something of a joke.

Wadhwa came out swinging. First he confronted Costolo on Twitter. Then he wrote a piece on TechCrunch in which he argued that Twitter should be leading the push for more diversity in Silicon Valley, accused Costolo of “hitting below the belt,” and – of course – mentioned the title of his forthcoming book, Innovating Women, twice.

Next Wadhwa sent a blast out to the 3,000 people on his email list, telling everyone how outraged he was and directing them to articles that were now popping up on Buzzfeed, Business Insider, Mashable, and The Verge.

Claire Cain Miller of the Times covered the fallout with a follow-up post on the Bits blog, titled, “Twitter CEO Defends Representation of Women at the Company – Sort Of”. The Times illustrated the post with a photograph of Costolo with his arms folded across his chest, smirking and looking smug. (Don’t think this happened by accident. The Times has lots of photos of Costolo to choose from, and they went with the shot where he looks like a jerk.)

The story keeps spreading. This morning, Valleywag had an item about it, listing a bunch of tweets from people who were disgusted with Costolo. The story has popped up on the New York Post, the Huffington Post, Jezebel, and AllThingsD.

On Monday, Wadhwa fanned the flames some more, publishing a piece for the Wall Street Journal saying that “Costolo’s comments were inappropriate and he owes me a formal apology.” Later he appeared on Bloomberg TV, and by yesterday afternoon, the story was picked up by CNBC and Fox Business Network.

Great work, Dick Costolo! Especially with that IPO coming up.

Asked for a comment, a spokesman for Twitter provided this statement: "Twitter actively supports initiatives to teach and mentor more young women with interest in science and technology. We are a technology company, but we are ultimately a company of people -- we have roughly 2,000 employees worldwide of different experiences and backgrounds, all working toward our goal of giving everyone the power to create and share ideas and information instantly without barriers."

It’s Not (Just) About the Optics

Wadhwa says the problem is not just that Twitter looks sexist. He’s not arguing in favor of appointing women as a kind of window-dressing or way of meeting quotas. He says that by refusing to include women, Twitter is making a dumb business decision.

Kara Swisher of AllThingsD agrees, writing: “Among the many reasons it might be a good idea? Numerous studies show that more women use Twitter than men.”

This whole thing is playing out against a larger story, which is the underrepresentation of women across all of Silicon Valley.

But women remain in short supply in Silicon Valley, especially at the highest ranks. Take a look at Apple’s leadership page, which lists nine top execs -- all white men -- and a board of directors comprised of seven white men and one woman, Andrea Jung, who became a director in 2008.

A bigger issue is the despicable “bro culture” and misogyny that have become pervasive in the Valley, especially in startups. Over the past year or two, people have started calling attention to the problem, but in this case sunlight doesn’t seem to be working as a disinfectant, as repulsive incidents keep occurring.

For another glimpse of the women-hating mindset, check out the comments posted under almost any article that touches on this subject – they’ll be packed with nasty remarks. For one example, check out this story on Business Insider, where “Event Horizon” describes Wadhwa’s call for women on Twitter’s board of directors, “a perfect example of mindless, rabid feminism.” Or go check out the even nastier comments on Wadhwa’s story on TechCrunch, if you have the stomach for that kind of thing.

This is Silicon Valley in 2013 -- a place where 20-something hackers behave like pigs on stage at a conference and we're all supposed to find it funny, and where the 50-year-old CEO of a global company, presented with a critique of what looks like a sexist culture at his company, responds by making a joke of it.

Dick Costolo is a former stand-up comedian, and I’m sure he thought that zinger was funny when he sent it out. Now, however, I bet he wishes he’d paused for a moment to think about how this would look. I'm sure his PR people wish that too -- not to mention his fellow white male board members, who have been waiting many years to reap a windfall on Twitter’s IPO and would be very happy if they could just sweep this whole thing back under the rug. Unfortunately for them, that might not be possible.

Photo of Dick Costolo by Joi Ito, via Creative Commons.