What's It Like Wearing Google Glass? A Glimpse Into the Future With Robert Scoble 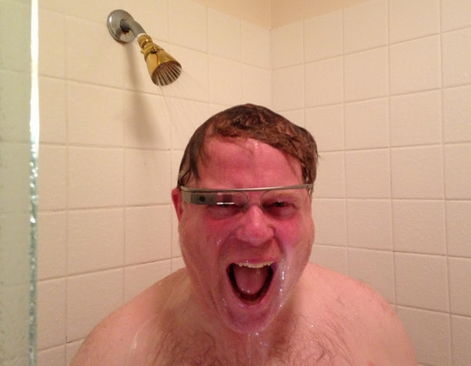 Imagine an app where you can look at something, say “Buy that,” and just like that, Amazon will get to work shipping it to you. Or imagine being able to say, “Find coffee nearby” and having an app direct you to a coffee shop where your drink is waiting for you, and your credit card has already been billed. Nothing to sign, no card or money to hand over -- just grab your drink and go.

Those things and more could be possible thanks to Google Glass, and they might not even be so far away, says tech pundit Robert Scoble.

Scoble has been wearing Google Glass every day, all day, for the past three months, and while he concedes that for now the device has limited uses, he says Google Glass has given him a glimpse into the future.

“I think everything is going to be `Uber-ized’ in the next 10 years,” Scoble says, referring to the car service where you order a car via an app on your smartphone and in minutes a car arrives at your location, and it’s all billed to your credit card, automatically. “I want everything to work like Uber. It just makes so much sense.”

If Scoble is right, Glass could radically change all kinds of transactions -- and could also have a profound effect on the world of marketing. Instead of having to figure out how to rank high in search results, marketers might need to game Glass and become the coffee shop or sushi place that Google sends people to. Instead of SEO, maybe we’ll talk about GEO – “Glass Engine Optimization.”

Moreover, Google Glass could actually change the nature of what marketing is. If JetBlue shows you where the best parking spots are when you arrive at the airport, is that marketing? The answer is yes, but it’s a new kind of marketing -- one where “marketing” is defined as providing useful, lovable services and keeping customers engaged, rather than buying advertising and pulling people into a “funnel.” We’re talking about inbound marketing on steroids.

Meanwhile, Back in the Real World …

Okay, let’s take a deep breath. All that stuff remains in the future. Google hasn’t even said when Glass will become available to the public, or what it will cost. For now, the gizmo is priced too high (developers pay $1,500 for the Google Glass Explorer edition) and does too little. More important, the current version of Glass still looks too big and dorky to go mainstream.

No doubt, Glass will become sleeker and less obtrusive. Eventually Glass may be built into ordinary eyewear. Or eventually maybe we will just get used to this, and we'll stop thinking that people wearing Glass look ridiculous. Scoble, however, says he has grown completely accustomed to the gizmo. "The novelty has worn off for me. Now it's just something I wear," he says. He's even worn them in the shower -- as you see in the photo above.

The bigger problem is that right now even proponents like Scoble admit there’s not much you can do with Glass. You can get directions, and use voice commands to get information. You also can take pictures and videos with the built-in camera. But there aren't enough apps, and it's still too difficult for developers to create programs that run on Glass.

“For now the camera is the killer app,” Scoble says. “I’d buy it for the camera alone if it were priced under $400.”

What else? “When you get a phone call it shows you the face of the person who’s calling,” Scoble says. “And recently when I was in London, as a tourist, I said, 'Okay Glass, get me directions to Big Ben,' and it just took me there.”

As far as Scoble is concerned that's enough to keep him wearing Glass all day, every day. “They add enough value to my life, just with taking photos, getting directions and making phone calls,” he says.

A Long Way to Go

Scoble reckons Google will announce the actual Glass product in February 2014 and start shipping them in April. So far, Google hasn’t provided developers with good enough tools for creating applications, but that too should change. Even so, some people are developing cool Glass apps. One engineer, who also owns a Tesla, has created an app that lets him control the car from his glasses.

As for the price, Scoble reckons Google will price Glass somewhere between $200 and $400. “I’m hoping [Google CEO] Larry [Page] prices them very aggressively. If they’re $200, a lot of people will buy them. Then it’s just a question of how many hours per day or per week you wear them,” he says.

For Google, the device could open up a huge new business where instead of selling ads, Google could facilitate transactions and take a slice of each one.

Scoble’s hypothetical example: You’re on a road trip, and you ask Glass to find the closest McDonald's, place and order, and bill it to your credit card -- so that all you do is drive up, grab your Big Mac, and go.

“If Google can make that world happen, and if Google can get, say, 50 cents every time something like that happens, that could be 10 times bigger in terms of revenue than what they’re doing now,” Scoble says.

Google will generate about $60 billion in revenue this year. Expecting the company to do 10 times that much may be a tad optimistic, but you get the idea. Those goofy glasses could be a pretty big deal.

Is there any universe in which you'd wear Google Glass? What would Google have to do to make the product worth the price tag?