Your CEO Doubts You. Now What? 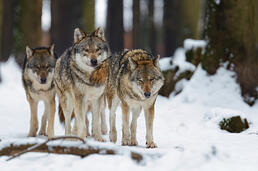 Editor's note: I'm incredibly excited to announce that Drew Williams will be contributing articles to Up and to the Right, drawing on his vast experience as a marketing entrepreneur and author. This is Drew's first piece for us. -- Dan Lyons

You run marketing. What’s the most important part of your job? Qualified lead flow? Cost per lead? Cost per sale? Return on Marketing Investment? Likes? Bzzzzt. Game’s over. Your ball flew wide of the hoop.

If you weren’t thinking “keeping the wolves at bay,” you might want to keep reading.

Recently I was engaged to run marketing for a funded startup. My team was doing all the right things, and by that I mean putting inbound and outbound programs in place to earn the trust of a challenging prospect in a brand new space. As Seth Godin frequently reminds us, trust is and has always been marketing’s currency.

The thing about trust, of course, is that it takes quite a while to earn – especially if you’re starting from a place where your prospects don’t know who you are.

With every month that passed after the launch of our marketing program, the CEO would inform me that we weren’t doing enough to drive leads into the sales funnel. Sales was feeling the same way. As time progressed, everyone became an armchair (marketing) quarterback: “Let’s hire outbound telemarketers," “We’re not running enough campaigns," “We have to change the value proposition," “If only we had better sales support material," “Let’s do this tradeshow," “Let’s do that tradeshow," “Let’s change the website."

I didn’t feel particularly singled-out by this kind of attempted intervention. In an often-quoted study by the Fournaise Marketing Group, 80% of CEOs are not impressed by the work done by marketing and believe they are poor business performers. Ouch.

It became clear to me that the most important job I had was to give my team enough time to put the marketing programs into place, build awareness, get prospect relationships to take root and, finally, start filling funnels – a process that commonly takes 6-8 months until momentum builds, and 12 months until reliable lead flow is established. That said, the startup immune system generally kicks-in at around 2 months or when cash starts running out, whichever comes first.

I set out to get control of the jittery, slightly paranoid immune system using the following weapons of choice. Some of these are offered to you via the rear-view mirror.

2. In the meantime, sell opportunistically. There will always be exceptions to the 6-8 month rule, and the entire organization needs to be selling to get those early sales in the door. For this to work, marketing needs to lower the bar for what constitutes a “qualified sales lead” in the early months.

Management’s focus needs to be on different sets of metrics, depending on how long the marketing system has been running. What’s more, all team members have to believe that a certain percentage of engaged prospects will later become customers. If your team has never been through such a cycle, you will have to sell them on it. Given immune systems and human nature, it’s often not an easy thing to do.

A Wolf in CEO’s Clothing

So what happened to my startup? I’m pleased to report that I was working with a very smart CEO who, in spite of his instinct to wade in and take control of marketing, didn’t. The company is now on its fourth round of financing and sales have increased 40-fold from when we started. Mission accomplished. The wolves got the hang of waiting for the dinner bell.

Marketing is hard. Systems have to be put in place, expectations have to be managed, and the value of patience has to be sold and then supported by the right results at the right time. All of this, in the end, is your job as a marketing leader.

Drew Williams is a serial marketing entrepreneur and co-author of “Feed the Startup Beast: A 7 Step Guide to Big, Hairy, Outrageous Sales Growth” (McGraw-Hill 2013). Drew shares his beast-building ideas at FeedTheBeast.biz/blog and @FeedYourBeast.