Whether or not you realize it, most of us use artificial intelligence (AI) in our daily lives.

Consider, for instance, how you leverage machine learning (one form of AI) when you scroll through Spotify's recommendations based on your past listening history – or when you watch a show from the 'Top Picks for You' list on Netflix.

Alternatively, perhaps you use AI through voice assistant services like Alexa; or when you interact with a company's chatbot to find important information in a timely manner.

All of which is to say: Most of us are pro-AI when we know it's AI. But what about when AI crosses into territory typically reserved for real, authentic human interactions? And how would you feel if you only discovered after-the-fact that the profile you'd interacted with wasn't a real person?

Recently, researchers at the Stanford Internet Observatory discovered over 1,000 LinkedIn profiles are auto-generated. Here, let's dive into this odd tactic, and whether there's a viable place in business for AI-driven sales or recruiting outreach strategies.

How It All Started: Meet Keenan Ramsey

Renée DiResta, a Research Manager at Stanford Internet Observatory, recently received a message on LinkedIn from a profile listed as Keenan Ramsey.

While the message seemed like an ordinary sales pitch, DiResta inspected it further and saw oddities about Keenan's profile: For instance, the image portrayed a woman with only one earring, perfectly centered eyes, and blurred hair strands that seemed to disappear and then reappear.

Ironically, DiResta is probably one of the few who could accurately spot the differences between an AI-profile and a real one, since she is a Stanford researcher who studies the spread of misinformation and conspiracies across social networks.

On Twitter, DiResta writes, "This random account messaged me… The face looked AI-generated, so my first thought was spear phishing; it'd sent a 'click here to set up a meeting' link. I wondered if it was pretending to work for the company it claimed to represent, since LinkedIn doesn't tell companies when new accounts claim to work somewhere… But then I got inbound from another fake, followed by a subsequent note from an obviously *real* employee referencing a prior message from the first fake person, and it turned into something else altogether."

The experience led DiResta and her colleague, Josh Goldstein, to launch an investigation which uncovered more than 1,000 LinkedIn profiles using faces that appear to be created by AI.

NPR further investigated the issue and found 70+ businesses were listed as employers on these fake profiles — most of these businesses had hired outside vendors and external marketing agencies, and were allegedly unaware of the use of AI in their sales campaigns.

Once I'd heard of this odd tactic happening across LinkedIn, I became curious: What did HubSpot sales reps and recruiters think of the strategy (since it's largely used in the sales and recruitment space)? Is it really all that bad, or is it just another futuristic form of automation?

Let's explore the pros and cons, next.

Pros and Cons of AI-Generated Sales Reps, According to the HubSpot Sales Team

Truthfully, few of the sales reps I spoke with could offer any positive sentiments when it comes to AI-generated profiles. Most of them deeply disagreed with the tactic.

As HubSpot's Mid-Market Growth Specialist Megan Scott puts it, "As a sales professional, I'm constantly battling the stereotype that we're all 'greasy' and deploying manipulation tactics to trick a prospect into meeting with us."

The bigger issue here is not the use of AI. It's the deception of AI masking as a real human, particularly when people are generally bad at distinguishing between a real or AI-synthesized face. In fact, a recent study found people have only a roughly 50% chance of guessing correctly whether an image is AI-synthesized or real, and many reported the AI-faces as actually being more trustworthy. 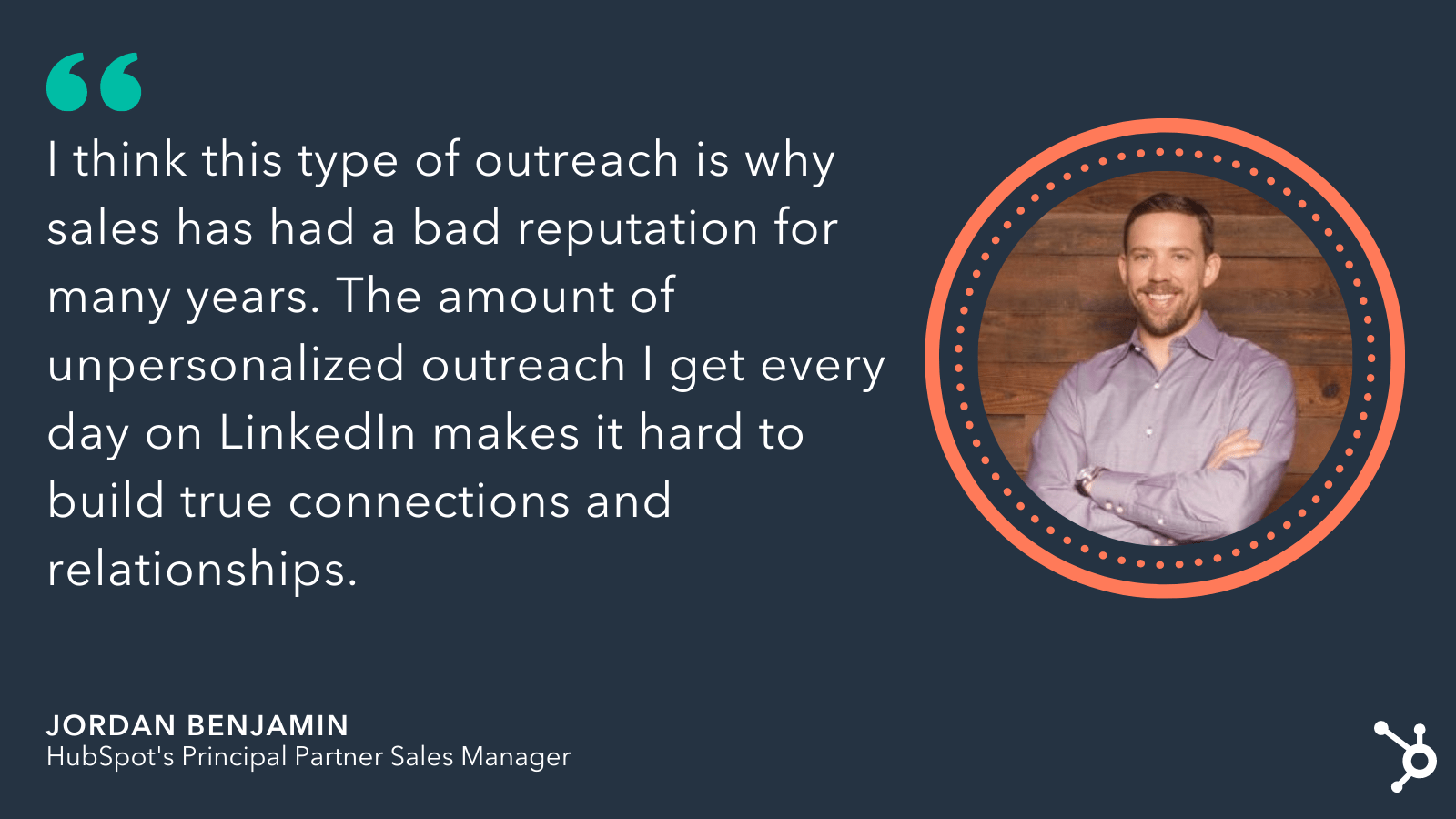 All of which is to say: One bad encounter with an AI-generated sales rep could permanently turn most prospects away from your business, as it quickly diminishes trust.

Jordan Benjamin, HubSpot's Principal Partner Sales Manager, agrees, telling me: "I think this type of outreach is why sales has had a bad reputation for many years. The amount of unpersonalized outreach I get every day on LinkedIn makes it hard to build true connections and relationships."

Benjamin adds, "I can tell when people actually put in research and have taken the time to target me with something that could be truly relevant or beneficial. Those are the type of sellers and companies I want to be working with."

When asked about the use of AI on LinkedIn, Barrett King, HubSpot Corporate Sales Manager, put it plainly when he responded with this GIF:

King told me, "I'm disappointed in LinkedIn for letting this happen ... Is there no sacred place?"

While this practice goes against HubSpot sales reps' belief in the power of authenticity and personal connection for closing deals, some reps can emphasize with why businesses would use the practice in the first place.

As Scott admits, "While this goes against my true-north principle of being personal and authentic in each of my interactions ... would I say no to a hot lead that was generated by a means like this? Probably not. Is it a good customer experience if they can tell they're being approached by a robot instead of a real human interaction? Probably not, too. But then again, what's the difference between an AI bot on LinkedIn and an automated marketing email that uses personalization tokens?"

It's true: While it's perhaps unethical to pretend an AI-sales rep is a real person, there's certainly major benefits to using AI in sales. In fact, many sales teams use AI already. Consider, for instance, the sales rep who uses conversational intelligence to transcribe and analyze phone calls, or the sales director who leverages sales engagement software to inform how and where to share high-impact content to prospects.

And, on a broader scale, AI-powered account-based marketing (ABM) platforms are used daily by companies.

Of course, most sales reps and leaders don't have any problem with AI. They do, however, have a problem with AI pretending to be a real rep – particularly on a social platform that is meant for real, honest, authentic one-on-one business connections and conversations.

So – if not in sales, does AI-generated profiles have a place anywhere?

Should AI-Generated Profiles Source Candidates for Your Recruitment Team?

One other place these AI-profiles have been leveraged is in recruiting.

On some level, this makes sense: Constantly sourcing high-quality candidates for specific roles is exhausting and time-consuming, and a LinkedIn bot can make the process easier for your team, leaving your recruiters to do the heavy lifting only once a candidate has expressed interest.

However, when I spoke with the HubSpot Recruiting team, many echoed the sentiments of their Sales peers.

As HubSpot Executive Recruiter Holly Bisson says, "I think if it's just used for sourcing and candidates are aware it's a bot — that's okay. But if it looks like a real life person and it isn't … that seems a bit deceiving and unethical to me."

Steph McDonald, HubSpot's Senior Technical Recruiter, agrees: "I'm not a fan of impersonating anyone, and it also violates the terms of service for LinkedIn."

These AI-generated profiles do, indeed, violate LinkedIn's terms. As LinkedIn's community policies states, "We don't allow fake profiles or entities. Do not post misleading or deceptive information about yourself, your business, your qualifications, work experience, affiliations, or achievements."

As Ryan Kabir, HubSpot's Senior Talent Researcher for Executive Recruiting, told me: "This idea almost feels like you're taking the 'easy' route. It also reminds me when Amazon tried to automate its ATS through AI. Its AI started filtering in more men than women, which is a reflection of bias rather than being held accountable at-scale. This idea might further perpetuate the challenges at hand."

Additionally, the practice simply might not be that effective. AI-generated profiles likely don't have the tools to understand specific nuances in conversation, and could incorrectly sort candidates based on general terms — leaving qualified candidates on the table.

As HubSpot Senior Recruiter Heather Bellingham puts it, "I don't understand how a bot could answer someone's questions that hasn't specified if they are interested or not. People aren't black and white. Also, the less people involved, the better — passing the candidate like it's a baton is sure to impact candidate experience." 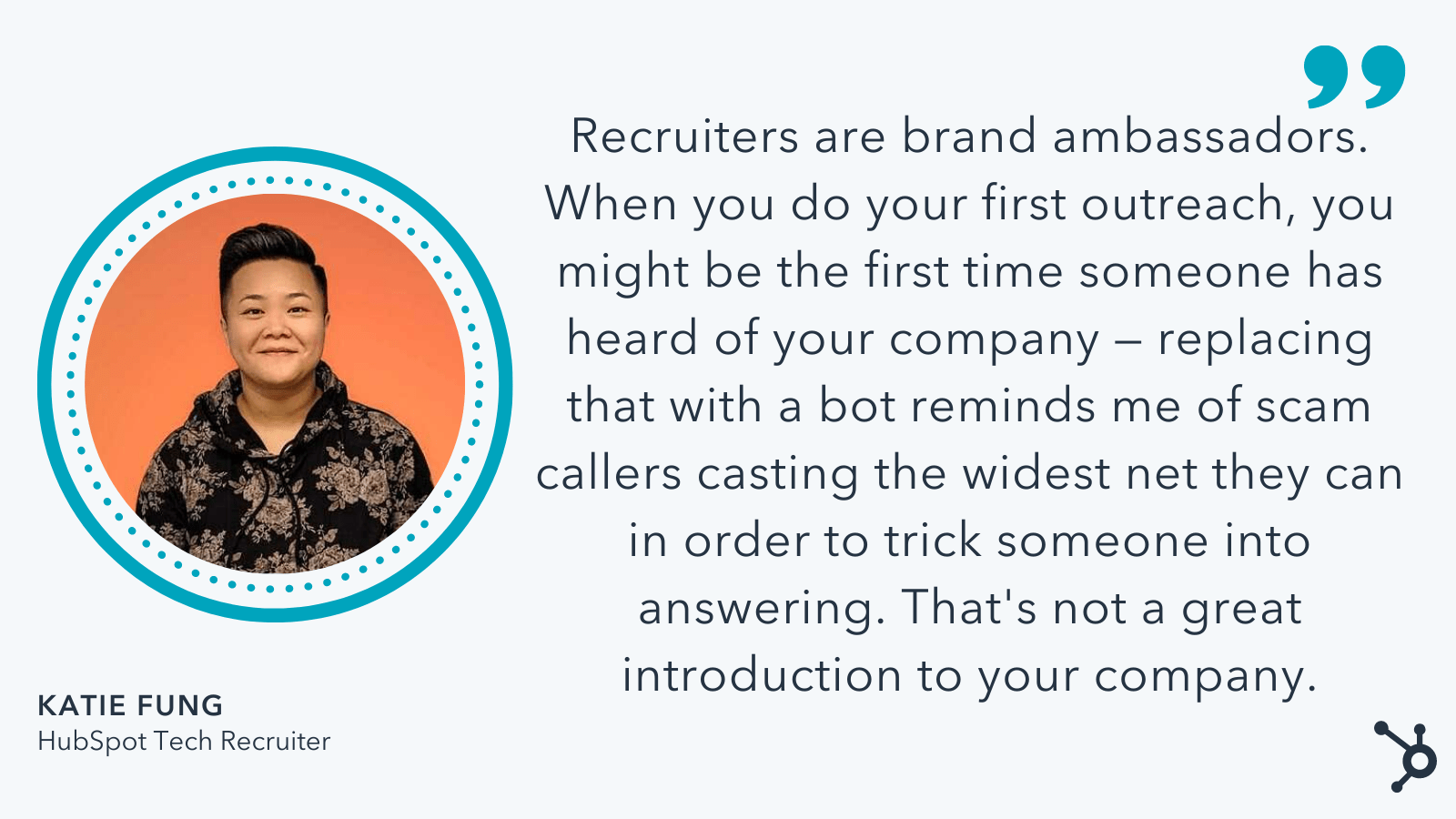 And even if it does work, AI-generated profiles ultimately take away one critically important part of any business introduction: The ability to build a relationship.

Both recruiters and sales reps are often a person's first impression of a brand. Taking away that opportunity ultimately impacts how easily your company can build and maintain a positive brand identity.

HubSpot Tech Recruiter Katie Fung says, "Recruiters are brand ambassadors. When you do your first outreach, you might be the first time someone has heard of your company — replacing that with a bot scrubbing for keywords really reminds me of scam callers just casting the widest net they can in order to trick someone into answering. That's not a great introduction to your company."

And Stephen Kelleher, Senior Executive Recruiter at HubSpot, puts it even more simply: "This commodification of the practice is wholly unethical and shows a real lack of integrity."

Ultimately, these AI-generated profiles are at the surface of a widespread problem we're beginning to see as a result of AI: the ability to create convincing fake audio and video (known as "deepfakes").

While AI and the use of automation is a critical component of any scaling business, it's vital your company remain diligent and suspicious of using external vendors who might be leveraging some of these less-than-ideal practices.

There are powerful and effective spaces for AI: but using it in the place of real, human interactions between your business and your prospects isn't one of them.