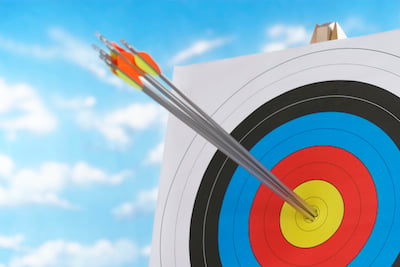 How many times during a sales forecasting exercise has one of your reps said something like, “Hmmm...I’d put the deal at 70%”? Probably more times than you can count.

But how do they know it doesn’t have an 80% chance to close? (Or 82.687% for that matter!) Where are they getting these percentages?

Frankly, thin air. At best, it’s an educated guess based on experience with similar deals in similar situations, but a guess nonetheless. Most sales managers create stages with associated percentages to corral these guesses into more manageable buckets, and while this helps, each deal is unique.

Besides hitting quota the number one thing a sales manager cares about is a sales executive’s ability to forecast accurately. But accurate sales forecasting is generally perceived as an art, not a science. Most believe you need lots of experience to do it well. And that's why your sales forecast is usually inaccurate.

I'm a firm believer that you can teach reps -- even new reps -- how to forecast more accurately. Throughout my career, I've shown a simple method I call "relative forecasting" to almost every rep I've managed, and it’s made dramatic differences in their ability to forecast business.

In a nutshell, instead of looking at single deals in a vacuum, I teach them to assign a percentage to an opportunity by comparing it to others in the pipeline.

Let’s consider an example sales pipeline to illustrate the process:

This is a pretty typical-looking sales pipeline. Each deal has an amount and an associated percentage to close -- possibly automatically generated through sales stages in a CRM system.

The first step is to examine Watchmaker compared to other deals in the pipeline. Pick a handful of opportunities of similar size where the total percentage adds up to 100%.

Now we have three deals to look at which add up to 100% in probability and average out to around $4,000.

At this point, I train my reps to ask themselves a very simple question: Would you bet your car that you’re going to close one of these three deals?

If they say yes, the percentages are likely accurate or close to it. From a sales forecasting perspective, I ask them to continue looking at these deals as a group. In this example, the rep can forecast roughly $4,000 by saying they are going to close one of these three opportunities.

If they say no, the percentages are likely inaccurate. So I would ask them to reconsider, and lower the percentage of one of the deals. For the purposes of this example, let’s knock JGB Construction down to 40%.

The total percentage no longer adds up to 100%, so we need to add a new opportunity into this group to reevaluate it. We can add Whiteboards in at 10% from our original pipeline:

I train my reps to do this for every deal in their pipeline. Instead of forecasting individual opportunities -- which can fall through for any number of reasons -- they forecast in groups. Once they confidently tell me “I’m going to get one of these four deals for X amount,” we track against each group.

If one of the individual deals in the group closes or falls through, that group no longer adds up to 100%, and we need to add more deals in to support the forecast. This method forces them to look at their pipeline as a whole, comparing deals against each other to formulate more accurate percentages, and in turn, a more accurate sales forecast.

This of course isn’t the only way to forecast a sales pipeline, but it’s one that’s worked very well for me over the years. More importantly, I have reps tell me all the time how much they appreciate the simple method and new way of looking at their business. If you decide to give my sales forecasting method a try, let me know how it works out with your team in the comments.

The Ultimate Guide to Sales Forecasting

How to Use Regression Analysis to Forecast Sales: A Step-by-Step Guide

A Straightforward Guide to Sales Potential