You’re on a call with a prospect, and everything is going smoothly. You are both cracking jokes like old friends, and there’s a strong rapport.

Your prospect is from Minnesota? What a coincidence! Your grandparents lived in Saint Paul for ten years before they moved to San Francisco. The conversation couldn’t be better.

By the time it ends, you’re confident they’re going to buy. All you need to do is send a proposal.

But then the buyer goes radio silent. One month later, and you’ve written four follow-up emails and left two voicemails.

Finally, you get a reply: “Thanks, we are not interested at the moment.”

Sometimes, the opposite happens. The prospect you are talking with doesn’t seem to respond to your friendly approach. However, when you send a proposal, she ends up converting into a customer.

At Kraftblick, a digital marketing agency, we encounter this type of behavior often. But it’s less unpredictable than you’d think. The answer lies in cognitive persuasion.

Emotions vs. Logic in Sales

To grasp the mystery of how the brain reacts to persuasion, think of communication in the army.

Whenever something happens on a battlefield, the same news travels in two directions. One stream of information reaches a platoon commander, or the leader of a small army unit. The platoon commander has to act on this news immediately, since the survival of her soldiers is at stake. There’s no time for in-depth analysis and reflection.

This particular direction is similar to how information from an outside world transfers to the limbic system of the brain, the “emotional brain.” The limbic brain activates the fight-or-flight response in our body. Emotions may take full reign over the logical mind.

The limbic system reacts to an emotionally charged message

At the same time, the other stream of battlefield news may be brought to the army headquarters by scout planes. The information is dissected, scrutinized, and evaluated. Military headquarters resembles the neocortex -- a thinking part of the brain. The route to the neocortex is longer than the one to the limbic system. However, the result is a well-informed, deliberate decision.

The message is rushing to the neocortex

Our impulsive actions (a burst of anger, an ill-considered purchase, and so on) originate in the limbic system. When reflecting on the past, we may wonder how we could have done something so stupid. It’s because the route to the limbic system is shorter than the one to the neocortex. Simply put, it takes less time to react than to think of how to react.

The resemblance between the brain and the army continues. At some point, the platoon commander submits the news report to the army center. Similarly, when information from the limbic system reaches the neocortex, it’s time for the brain to analyze our emotional reaction and how well it matched the situation. 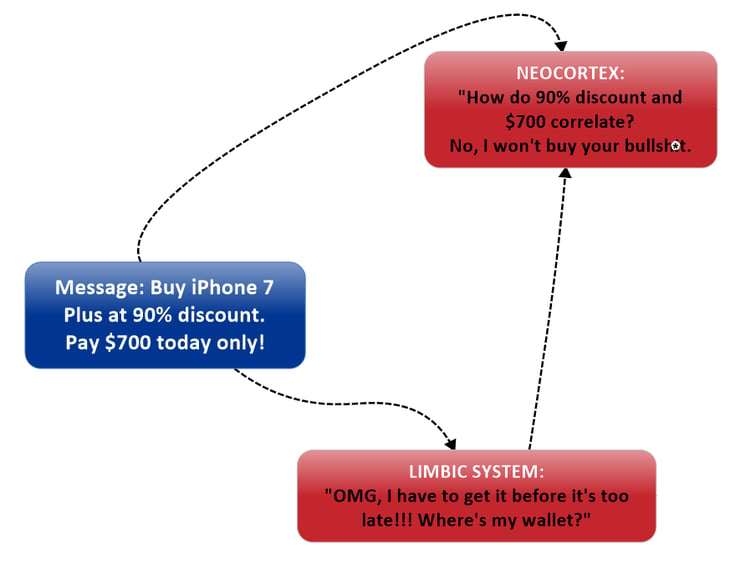 The neocortex is overruling the emotional response

Notice again that the same information travels in two directions in our brain. These routes are parallel, but no matter their difference, information eventually ends up in the “rational brain.”

What does it mean for persuasion tactics that are based on emotions?

The Power of Emotions Is Exaggerated

Some claim regardless of what salespeople are selling -- products, services, or advice -- people buy based on feelings.

However, I believe we overestimate the power of emotion and oversimplify the decision making process. The fact that the emotional center in the brain reports to the thinking brain should encourage salespeople and managers to embrace its several applications.

To be convinced, most people require a combination of emotion and fact-based arguments. Human brains are built to perceive and analyze information before deciding on a conclusion. Give your prospects facts, statistics, and case studies to support your emotional appeals.

Persuasion techniques such as flattery, praise, or charm aren’t helpful if your prospect recognizes they’re being manipulated.

Dale Carnegie, author of How to Win Friends and Influence People, was a master of influence and persuasion. But a reader who’s not as skilled may apply his techniques awkwardly -- instantly alerting the other person to their motives.

Never forget you’re dealing with thinking humans who can read between the lines. Strive to be authentic and helpful, and you’ll be able to persuade people organically.

Even if people act on emotions now, they may back down later.

Driven by their impulses, a prospect might buy whatever you suggest or agree to your negotiation terms. However, if this decision actually contradict his interests, he’ll realize that shortly -- and may renege. Not only will you permanently damage the relationship and lose the sale, but you’ll miss the opportunity for a referral and generate negative word-of-mouth.
In the long run, encouraging impulsive decisions won’t help you build trust or win clients’ hearts.

Emotion-Based Tactics to Steer Clear of

If you want someone to act on his or her emotions, you need to intervene during a time lag between information being processed in the limbic system and the same information rushing to the thinking brain. This is a window when a rational mind is asleep while emotions are activated, and nobody is there to suppress them.

While these manipulative techniques can lead to short-term gains, they’ll hurt you in the long run by generating negative word-of-mouth; cancellations and refunds; and a high churn rate.

Let's return to my original point. What happens to the prospects who seem like they’re ready to buy but end up walking away? Is the magic of influence fleeting?

If you frequently puzzle over your prospective clients’ mood swings, your strategy is probably too dependent on emotion.

Remember: Although it’s easier to evoke feelings in someone and play on them than appeal to their logical side, eventually, that logical side will tame their emotions.

Whenever you have to make a point or negotiate a deal, use these simple yet useful recommendations.

How do you use emotion versus logic when selling? Let us know in the comments!

7 Powerful Persuasion Tactics to Close Your Next Deal